It’s nice to finally see a company try to change things up, not only in aesthetics, but in the actual design of the AIO cooler itself. Even though there’s no mention of this on the company’s site, I’ve read that the Tundra series was designed in house by SilverStone rather than simply using what parts an OEM has on hand.

If that’s true, the Tundra series is a great first attempt to break into the AIO cooler market, but innovation usually goes one of two ways. Either a product or design concept is revolutionary and results in immediate improvements, or it requires some additional tweaking in order to be a viable design, even if the theory behind the innovation is sound. 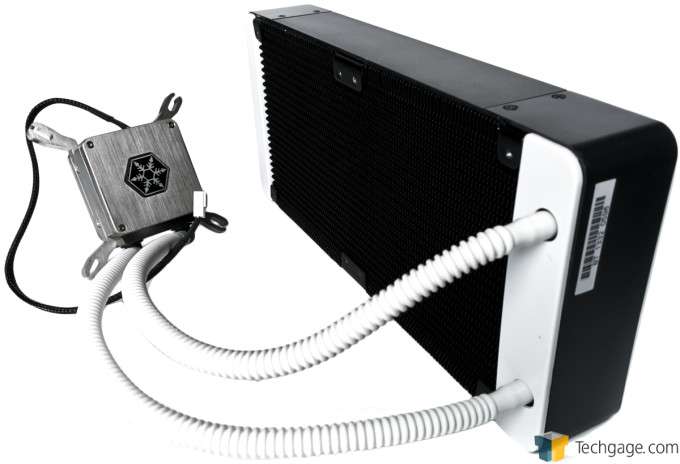 After our testing we feel that the TD02 falls into the latter category. We feel confident that the problem isn’t with the fans, seeing how swapping them out for Corsair units made no difference. So, is the problem with the pump? The block design? The smaller diameter hoses? The unique fin array on the radiator? A combination of all of these? It’s hard to say, but one thing’s for certain: if a 240mm AIO cooler gets beat up by a 120mm unit, it’s time to head back to the drawing board. That might sound harsh, but a 15 degree difference between a similar cooler that is in direct competition with the TD02 is just too large to disregard.

We had intended to test the 120mm Tundra TD03 as well, but ran into issues with our test system. For the sake of time we decided to get this review out the door, however testing the TD03 would have given us addition comparison data. If it beat the larger TD02, we’d know for certain that there was something wrong with our review sample because the numbers are so far out of line with what SilverStone claims. Once our test system is sorted out, we may revisit the TD03 and if we do, will update our readers accordingly. 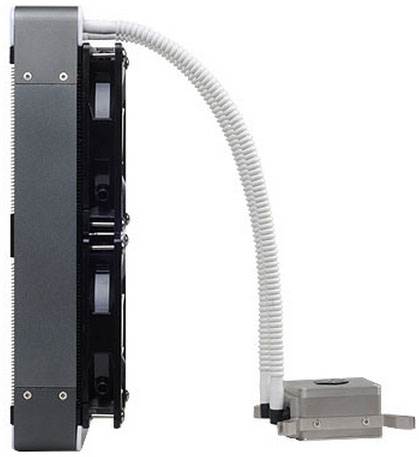 Performance aside, the quality of the TD02 is fantastic. The finish on the copper block is impeccable, the solid aluminum cover and retention brackets are the strongest that we’ve ever seen, and the radiator has a quality feel to it due to the extra heft and support that the brazed fins provide. Just keep in mind that not every system will be able to handle the increased thickness of the radiator

If you’re into looks, which most enthusiasts are, try slapping one of these coolers in a chassis with a black interior and white accents, or one that’s all white. Yeah, that’s money! Subjective money, but money nonetheless.

The TD02 is currently selling for about $120 US, which is $20 more than competing AIO coolers giving it less bang for your buck. On the other hand it’s a solid, well-built cooler that looks good doing what it does, even if it’s not quite as effective as some other coolers on the market.