With power supplies pushing the stratosphere of over 1000 watts we lose sight of the needs of the basic user. If your system isn’t bleeding edge with terabytes of storage, SLI or Crossfire and a pair of power hungry processors you really don’t need tons of juice. If you’re like the majority of users out there with a couple of hard drives, a burner or two, a single video card and a dual-core processor you just need a simple, reliable power supply.

Often overlooked are the lower range of power supplies, I say lower range because we’re talking sub-500W. For years and today still most PC builders use power supplies in the neighborhood of 250W or less. The huge PSU club is generally reserved for servers and high-end workstations in the OEM world. Why then are all the enthusiasts jumping on the monster PSU bandwagon? It’s hard to say. Some of it has to do with hype, fear that something will come along and render their dear old PSU useless but fear not, if you’re not running an extreme machine you could get by with a power supply that doesn’t cost an arm and a leg and still have great results.

Today we’ll take a look at a product that fills that niche, the Silverstone SST-ST40EF. The ST40EF is a 400 watt PSU that’s not only priced right but is quiet and efficient. The ST40EF is a member of the 80 Plus club, this means that it’s certified to put out 80% of what it’s using from the wall. If it’s drawing 100W from the wall it’s putting out 80W to the PC. The better the efficiency your PSU has the less wasted energy in heat and the lower the power consumption per hour your PC is on.

Let’s take a quick look at what Silverstone has to say about this little gem.

Equipped with a new generation of design and components, the Element ST40EF continues SilverStone’s stride toward more efficient power supplies. With higher than 80% efficiency across all loading conditions (from 20% to 100%), the ST40EF produces less wasted heat than typical power supplies and allows the included 120mm fan to operate at minimal speeds, ensuring silent operation for nearly all applications. This stable output and efficient characteristics are packed inside an environmentally-friendly casing that is compatible with nearly any ATX enclosures on the market. If strong and silence are the main priorities, the Element ST40EF is for you. 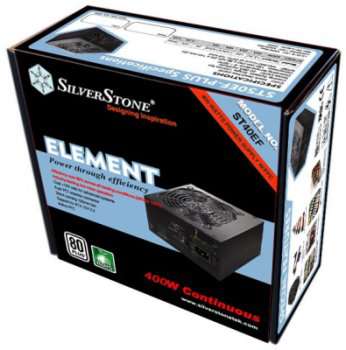 Now that that’s out of the way let me set the record straight, they goofed up. The ST40EF does not have dual PCI-e connectors as it says in the special features section. No, it’s only capable of running one PCI-e card as it sits out of the package although I wouldn’t hesitate to run a pair of 7600GS’s or lower on it in SLI since they don’t need an external power source. I’m sure that a single 7900GT probably draws as much power as a pair of 7600GS’s would need so it’s a no brainer. "But Matt," you’re saying to yourself, "For SLI’d 7600GS’s you’d need a PSU with 28A on the 12V rail." Yes you would and you have that with this baby. but I’m getting ahead of myself. Let’s look at some pictures shall we? 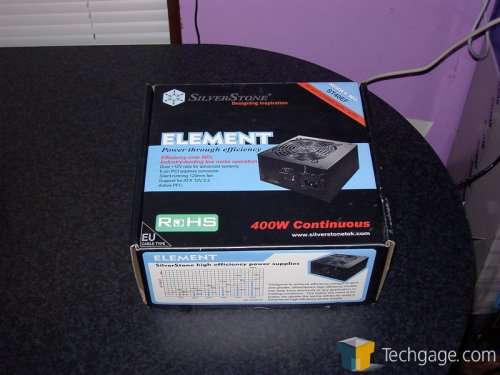 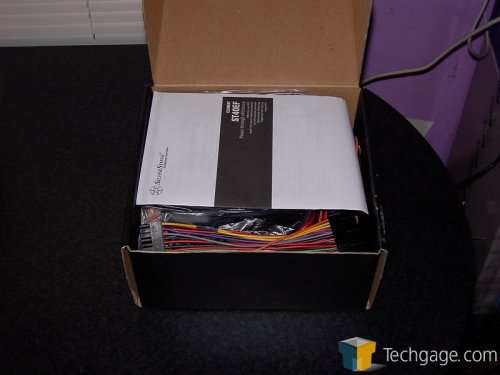 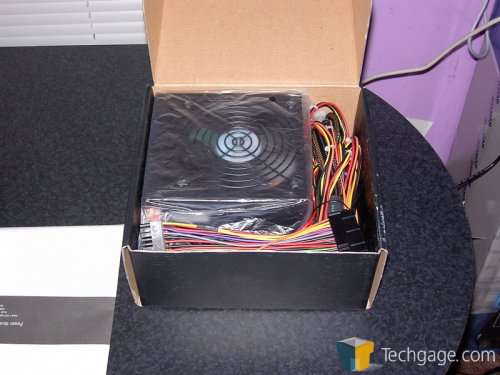 The ST40EF comes in an unassuming box, the box art explains about the 80 Plus and how it benefits you, the user and also lists the features of the PSU. Inside the box is the PSU, manual, 24 pin to 20 pin adaptor and some screws. That’s it. 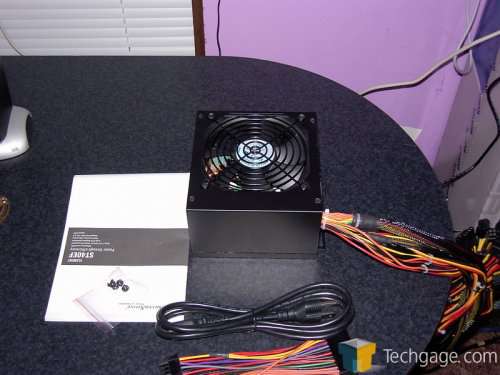 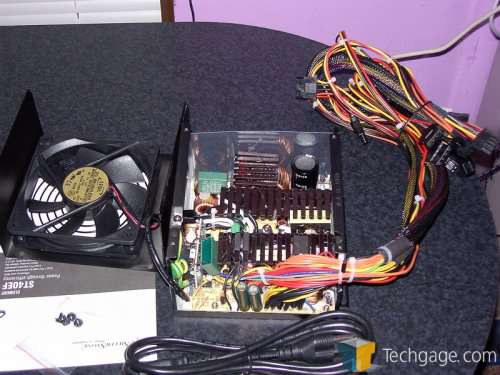 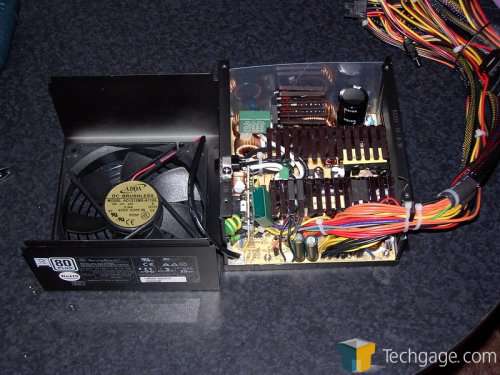 Inside the PSU we find that the layout is clean and simple. It’s cooled by an ADDA 120mm fan and has notched and bent heatsinks similar to the swaged heatsinks used in the Toughpower 750 I reviewed recently. I’ve got to say that while these types of heatsinks might look cheesy they’re actually very well thought out. They allow the air to pass through the "fingers" of the heatsink thereby giving the best heat exchange.