With power supplies pushing the stratosphere of over 1000 watts we lose sight of the needs of the basic user. If your system isn’t bleeding edge with terabytes of storage, SLI or Crossfire and a pair of power hungry processors you really don’t need tons of juice. If you’re like the majority of users out there with a couple of hard drives, a burner or two, a single video card and a dual-core processor you just need a simple, reliable power supply.


On electronics heat equals resistance to electron flow which lowers efficiency. Are you starting to see the pattern here? You’ll also note that the majority of he cables are not sleeved. Just the main ATX, 4 pin ATX 12V and PCI-e cables are sleeved. Yes, I know it’s not pretty but you pay for those additions so in the end it balances out. This PSU retails for around $85, while it’s pricey it’s till not as pricey as a 750 modular with fully sleeved cables. If sleeving is your thing you can pick up a kit and do it yourself in the color of your choice so there is that option and if you’re the type that would re-sleeve a PSU in the color of your choosing this saves time in not having as much to remove. 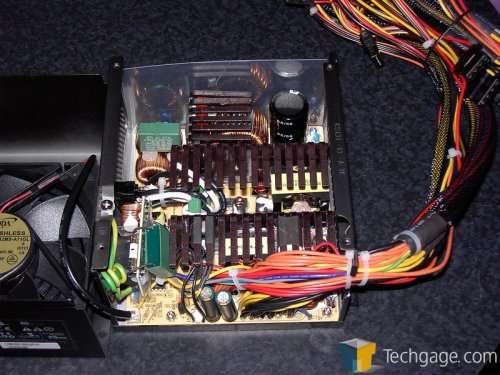 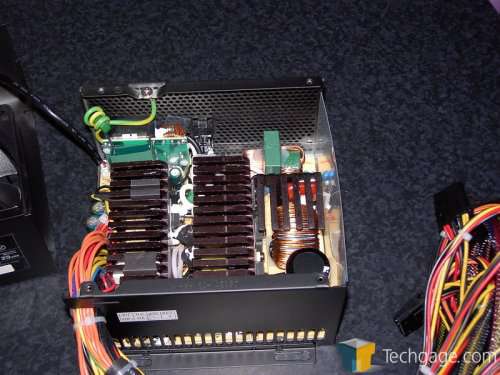 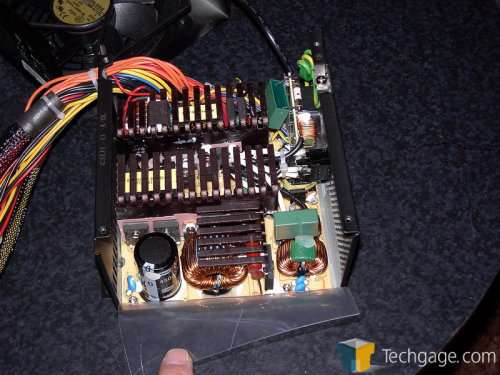 The PFC circuitry uses nice fat torroid transformers while the secondary side uses a mix of torroids and iron core transformers. The caps are by Teapo and while Teapo has a bad rep it’s only if they’re abused. If a Teapo cap is used in a properly cooled device they last just fine, they just don’t do well in marginal environments. Nothing to fear here. 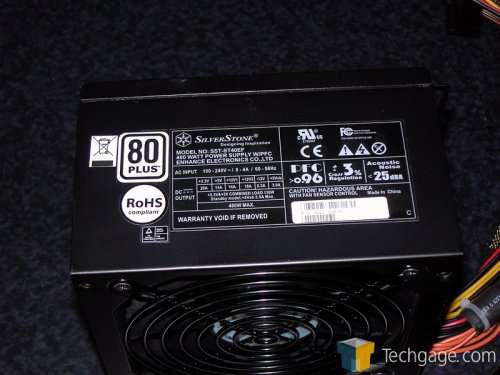 A look at the label shows the ratings per rail and a surprising note, the name of the OEM for this particular model. This particular model is made by Enhance Electronics. While this might not mean much to most rest assured that Enhance makes very nice PSU’s. 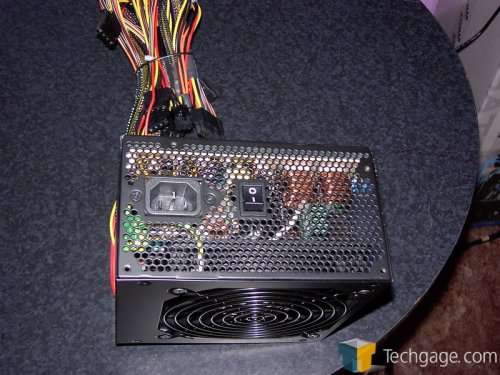 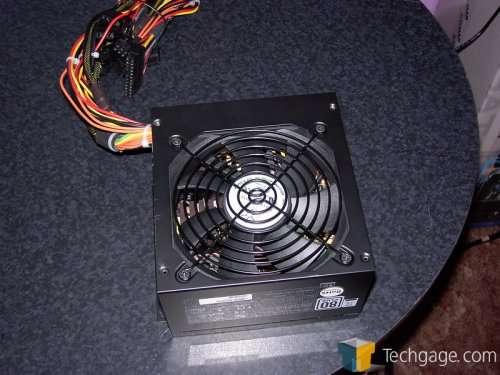 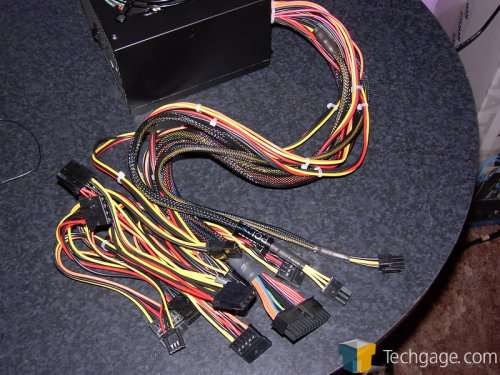 Looking at the rear of the ST40EF shows a nice open honeycomb grid pattern that will ensure that the unit gets great air flow. That coupled with the 120mm fan under the black wire grill helps to make sure that the ST40EF keeps it’s composure under the most grueling conditions. Here’s a better look at the cabling of the unit, there are 6 SATA, 6 IDE (molex), 2-4 pin floppy connectors, 1 PCI-e connector, the 12V ATX 4 pin connector and the 24 pin main ATX connector. Be advised that you don’t want to hook a dozen drives up to this unit along with a high-end PCI-e card. It could lead to problems. Personally I’d suggest using 6 drives max.

My testing methods have changed, no more slapping a PSU into my PC and seeing how it holds up, now I’m using a SunMoon SM-268+ active load tester to load the PSU. I’m also using an oscilloscope to measure the ripple on the rails. I’ll also report the efficiency of the unit at each stage of testing along with the PF (power factor).

The ripple on the 3.3V and 5.0V rails never exceeded +/- 10mV and the ripple on the 12V rails was likewise clean at +/- 30mV. Very impressive especially considering that test five pushed the unit 11 watts past the rating of the unit. During testing I never noticed the fan approaching an audible level above the fan in the SM-268+. The fan in the tester is pretty loud but in the time I’ve been using it I have seen more than a few units heat up to the point that the fan(s) drowned out the fan in the tester. The air coming from the exhaust on the ST40EF never got above lukewarm under load, even at the highest setting in test 5 and I kept the load on it for well over 20 minutes.

Overall I’m impressed with how well a "lowly" 400 watt power supply has performed. The rails stayed firm under full load, the efficiency is simply great and the ripple was phenomenal. This is a very clean and well regulated power supply. While the ST40EF might not be the prettiest belle at the ball it’s a very solid performer and should be more than up to the task of powering a good mid-range PC. That said I’m awarding the Silverstone ST40EF an 9/10 and our Editor’s Choice award.