SilverStone has been known to release quiet fans that do a great cooling job. Today we are looking at two models, the FN81 and FN82. Both fans are very similar in size, but are slightly different in styling. Let’s check them out, to see what one is better.


As you can see, the 80mm and the 92mm fan create about the same about of noise but the 92mm really pulls away when you factor in the amount of air that each is moving. The 92mm moves about 11 more CFM than its smaller brother the 80mm. 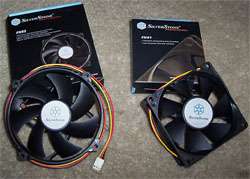 When it comes to packaging, SilverStone makes sure their first impression counts. The boxes are attractive and have the appearance of quality. This was an impression not lost once the fans were out of their packages. The feel of the fans is nice. The plastic doesn’t bend as some of the other fans that I have do. They feel robust yet are lighter than my other 80mm fan.

I will test the sound given off by each of these fans by hooking them to my fan controller and listening to audible differences when the speed is increased. Before I test these fans, I eliminate all unnecessary noise that my PC might create. I unhook all other fans and leave only the CPU fan as well as the video card fan. When hooked up, the fans make almost no noise compared to the noise that my CPU fan puts off. This is something that makes me happy. These two fans, while not silent, are quieter than my other components and will not add much to the total noise my PC gives off. 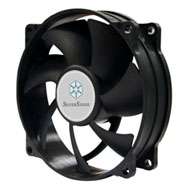 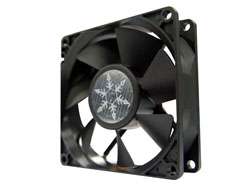 In conclusion, I have to say that I am happy with both of these products. They both put out little noticeable noise and push enough air to effectively cool anything that you attach them to. I am particularly happy with the performance of the FM82. I know that it is a much larger fan than the FN81; the 80mm mounting holes make it perfect for a side panel on any computer case. This fan puts out a lot of air with minimal noise. I am happy to now use only SilverStone fans in my computer as they have proven to be quiet, quality and effective.

Therefore, I am giving the FN81 a 7 and the FN82 a 9 with the editor’s choice award. The FM82 is all that I could want in a fan and then some. The fact that it can be mounted almost anywhere a 80mm fan can be mounted is a huge bonus as you are getting 92mm airflow from a 80mm area.
Many thanks go out to SilverStone for allowing me to go over these fans. I think they have a great thing in the FN82 as well as a standard, high quality 80mm can in the FN81.

Feel free to discuss this review in our forums! You do not have to register in order to reply to your content releated threads.