The hard drive installation is incredibly simple. The most difficult part was screwing the unit back together. If your screwdriver has a magnetic end, you’ll be fine. Because of the holes in the unit though, it was fun trying to get the screw to the hole, without losing it.

To test the cooler out, I’m going to use my primary Western Digital 160GB hard drive. As you can see in the picture, the harddrive is much smaller than the unit itself. Black cat that won’t leave you alone while working, not included. 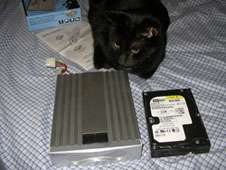 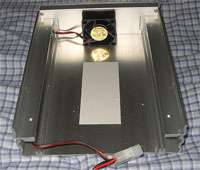 The unit installed flawlessly into the computer. I had a difficult time fitting it in around cables, but that’s due to my small case, not the cooler. To test the temperature, I used both HD Tune and SANDRA 2005. I did some manual stress tests with both programs to see how high I could get the temperature. 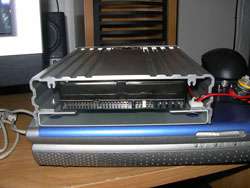 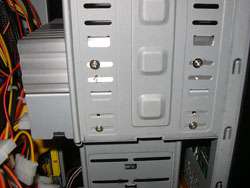 I had personal doubts that a HDD cooler would make much difference, and I was actually harsher with the stress tests with the cooler installed, because I really wanted to see if I could break 38ÂºC, but I couldn’t. In the end, the cooler shaved 3ÂºC off the idle/regular use temp, and 7ÂºC off the load temperature.

Some may ask the question.. is it really important to keep a hard drive cool? Even myself, I don’t usually care about how hot my HDD’s get.. as long as they are not outrageously high. Generally speaking though, when your computer components overheat, they could end up dying on you sooner. So keeping your HDD cool, could prolong the units life. If you live in a cool environment, you may not need one as much. Personally, if I had hard drives hover around 40ÂºC all the time, I would considering getting a cooler. If it’s 50ÂºC+, I would consider it a definite need. 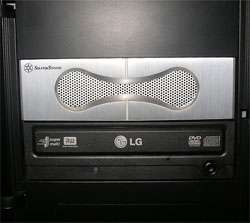 Overall, I highly recommend the FP53. I knew that it would likely help keep my hard drive cooler, but I consider 7ÂºC cooler to be quite significant when talking about a hard drive. It looks great, and does as it’s supposed to. If you are in the market for a HDD cooler, you should definitely check out the FP53.

Have something to say about the FP53? Further burning questions you demand be answered? Feel free to leave a question or comment in our related THREAD. No registration is necessary!