SilverStone has become well-known over the years for producing top-quality products, and the FT01 further reinstates that fact. Although the chassis is a bit pricier than others, it’s well-deserved. Obvious R&D went into this one, and not only does it offer superb airflow and the lack of a single sharp edge, it’s also one of the quietest chassis’ we’ve used in a while.

Now comes the part I enjoy most of all when it comes to reviewing cases, the installation! For this build I will be using the following parts:

Everything installed simple enough and there was plenty of room as well. This case is designed for nothing larger than a regular ATX motherboard so you may run into issues with video cards longer than the HD 4870 when it comes to plugging in the PCI-E power cables. But, that problem arises only if the middle drive bays have to be used. If they don’t, it can be removed to allow even the largest of cards to be used.

One thing that you will NOT run into problems with is the CPU heat sink. I used a SilverStone NT-08 which is about as tall as they come and had plenty of clearance for the side panel. 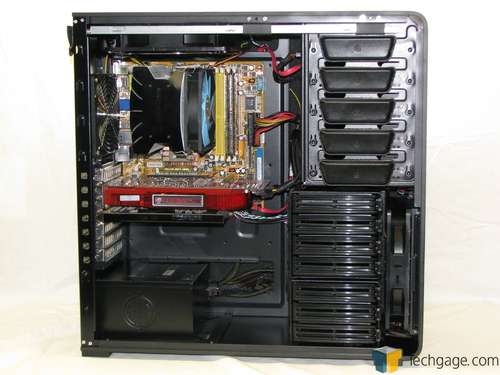 Cable management is also a breeze. The rolled edges are not only as smooth as butter, there are lots of places to route your wiring through to keep things clean. There is plenty of room behind the drive areas to stash extra wiring. One downer was the fact that the foam insulation on the side panel made it tougher than I liked to get the panel attached properly. Using a modular power supply would be beneficial as you won’t need to tuck as many wired behind as I did. 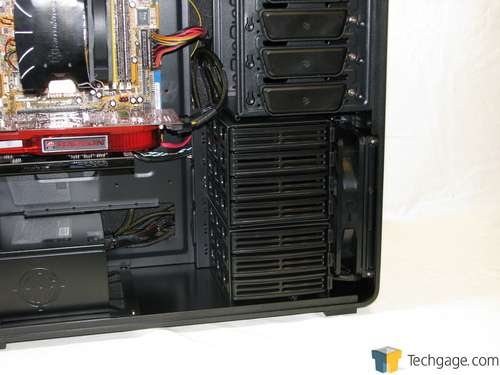 When I first received this chassis, I expected it to be quiet. What I was not ready for was just how quiet it was. I have built quite a few PC’s where I could hear the hard drive spinning over the fan noise but they were also not that effective in cooling everything down, requiring me to limit my overclocking or to install a CPU cooler with a loud fan. Add to that I am running a known-to-be-hot video card and I was almost certain I would run into issues with silent fans.

SilverStone took some time making sure this would be as close to silent as possible. Both side panels are insulated with foam padding. Also, by using the plastic cage for the hard drives, they were able to insulate the hard drive noise as well. I can honestly say this is the quietest case I have ever used that runs fans.

The next feature that blew my mind is the utter lack of sharp edges. Most manufacturers have woken up and pay close attention to this little detail. However, since I am looking for them, I have managed to always find at least one finger-biter in every chassis I have ever worked on. The Fortress just plain has none. If the edge is not rolled over, it is dulled. Even putting your fingers where they do not belong does not reveal a sharp edge.

When it comes to airflow, nothing kills it faster than those silly stamped fan holes. Even the newer large opening designs still contribute to back-pressure causing the fan to be less efficient than it could be. Here we see the complete lack of them and the use of a more “normal” wire fan guard instead. This makes a huge difference with low speeds fan as they lack the pressure to push through smaller openings. This is also another reason for the silence as there is a lot less turbulence from the air flowing into and out of the fans.

While there was little bling and flash used in the design of this case I can’t help but feel that there was a tremendous amount of time spent developing it. Something as simple as including a reset switch gives big points in my mind. There is nothing worse than pushing your overclock too far and having to reach around to the back to flick off the switch to the power supply because you system had hung hard. 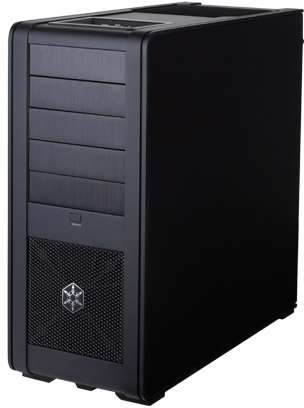 Then there is the cooling. I have yet to see fans running under 1000RPM, no matter the size, remain effective in system cooling. Noctua has been the only fan I have previously run at speeds that low that could manage decent performance. Someone sure did their math correctly because even my furnace of a video card had no idea what hit it.

Even with the GPU fan set to a measly 30%, I was recording idle temperatures in the low 40C range and I have yet to see 70C after hours and hours of gaming. Doesn’t sound like that big of a deal, but that card is overclocked as far as CCC will allow. The same goes for my CPU. I haven’t seen over 40C even running overclocked to 2.5GHz. This may still not seem like a huge deal until you remember that this is all happening in near silence.

Overall, this case easily scores a 9 out of 10. It has far exceeded my expectations on every level. I do not give out ratings like this very easily. In fact, I believe this is the highest anything has scored in my eyes in some time. What it all boils down to is that you simply get what you pay for. I found pricing from $200 – 240 and can whole-heartily say that you will not be disappointed for spending your hard earned money here.

Any way you look at it, this case is a sure winner. If you don’t need E-ATX size and you want drop dead silence and looks, this case will work great for you. I have had the pleasure of working with some really good cases before, but from here on out I feel I may be spoiled and expect too much in the future. If you are ready to build and have yet to pick a case, take this one very seriously. I guarantee you will not be disappointed.