SilverStone’s Raven RV01 chassis might not have been the most well-received, but the company has attempted to make up for all the mistakes of the initial chassis with a follow-up, the RV02. Fortunately, the company has done just that, and except from a rather minor issue, and possibly its price, this is almost a perfect chassis.

To assure that our results are as accurate as possible, all of our chassis testing is performed under highly-controlled conditions. Our test chassis is kept in a near-steady 20°C ambient environment, with readings taken before and after testing with a standard room thermometer. After we boot up our machine, we allow Windows to settle itself down for 10 minutes, to stabilize processes that might be running in the background. Once Windows is completely idle, we record the current CPU temperature as that in our results.

BIOS settings are verified prior to each run, and to help with quick switching of our various profiles, we make use of the motherboard’s ability to store multiple configurations. We primarily use two for our testing here – stock speed, of 3.0GHz, and also a maximum over clock, of 3.95GHz. Stock settings were achieved by using “Load Optimum Default”, and storing those as our stock profile. The maximum over clock was obtained after extensive testing and tweaking to insure it was stable. The CPU’s vCore was raised to 1.400v, and the Northbridge was raised to 1.30v. The RAM is run unlinked to run at factory speeds and voltages.

For our monitoring and temperature reporting, we use Everest Ultimate Edition 5, from Lavalys. It allows us to grab the results from each one of the cores, and the CPU as a whole, so we believe it to be indispensable to our toolkit. To help push our Intel Core 2 Extreme QX9650 to its breaking-point, we use LinX. The reason is simple: it utilizes LINPACK. After much testing with various “stress testers” in the past, we’ve found that running a multi-threaded tool that supports LINPACK, like LinX, pushes both AMD and Intel CPUs like no other. This results in higher temperatures than others (like Prime95) can muster, and also greater power consumption.

Because our test machine is equipped with 4GB of RAM, we set LinX to use 3072MB, and then set the test to run 5 times over, which takes about 15 minutes total. With the help of Everest, the CPU’s various temperatures are recorded throughout all of the testing, and also for a minute after the test ends. The maximum recorded temperature found in the results file is labeled as “Max” in our results.

Without further ado, here is a breakdown of our test machine:

Working on the RV02 was for the most part a breeze. There is a ton of space for even those with large hands and even more space for the largest of video cards with roughly twelve inches of space between the PCI back plate and the bottom fans. The one annoyance was the requirement of removing six screws from the front panel in order to pop it off to open up the DVD slots. The screw holes were difficult to access in a few spots causing me to drop the screws more than a few times. I had to laugh that I even found an extra screw that must have been dropped inside by the assembler at the factory.

Running the cabling through the slots to backside of the motherboard tray was also a snap. There are many ways to route everything as well as lots of hold downs for securing them in place. After a mere 10 minutes of effort I ended up with a good clean and out of sight arrangement. 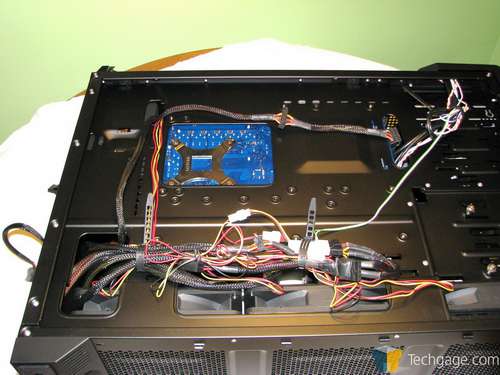 There is also a nice area below the power supply and behind the rear most intake fan to stash all the extra wiring from your power supply. Those of use without a modular unit won’t be punished and forced to come up with a creative solution to secure the extra wiring out of the way of the air flow. 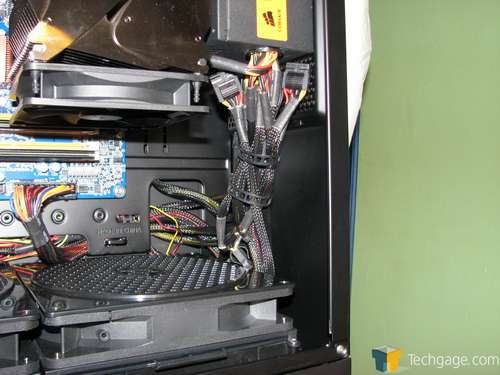 There are plenty of slots along the bottom that will let you slot wiring for the motherboard and the peripherals. Again, little effort was required to run everything where needed and yet another flaw of the original RV01 has been corrected in spades as to cabling. The RV01 has major issues with cable routing requiring longer than standard cables as well as stretching wires across areas in the path of cooling air. No such problem exists in the RV02. 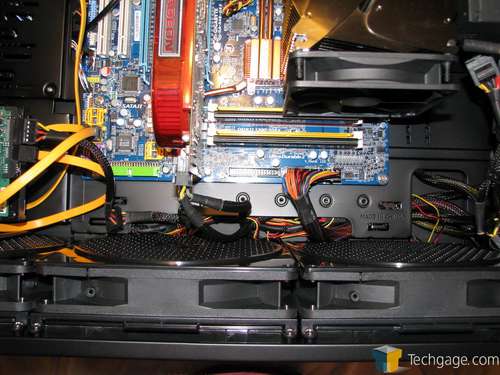 After spending roughly twenty five minutes of my time I was pleased to stand back and admire the results of my build. I rate the ease of installation a ten out of ten on this chassis. There are no sharp edges anywhere and everything is logically located. If you don’t pay attention to the orientation you don’t even realize you are building inside a chassis with everything rotated on a ninety degree axis. 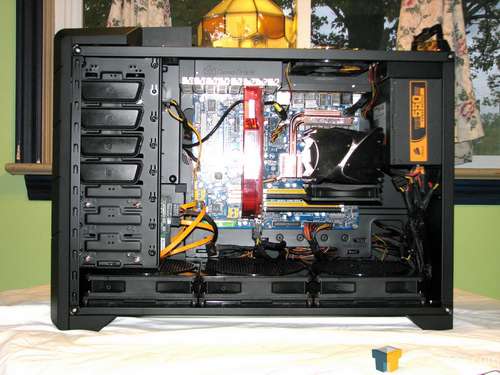 With the side panel finally re-installed the final results of the fruit of our labor are for the eye to behold. The magnificent large window is just awesome and really lets you enjoy the work you have done minimizing the clutter inside. 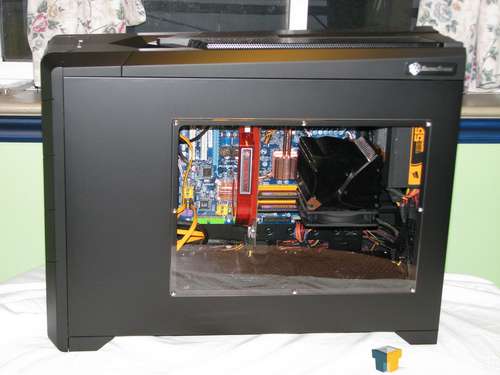 Keeping the exterior cabling clean is a simple affair. There is a ton of room inside the top for any type of wiring. My test monitor is a little on the old side, and I have to use a DVI to VGA adapter, so I was worried the top panel would not fit on with this setup. This was yet another flaw on the original design. 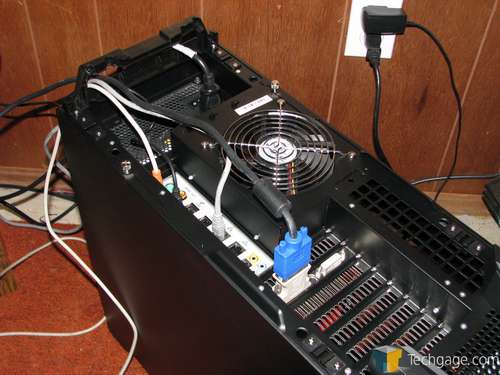 I am happy to report that there is plenty of room under the panel for this arrangement. The monitor cable was not forced into any crazy angle that would make me worry about destroying the wiring inside its sheath. 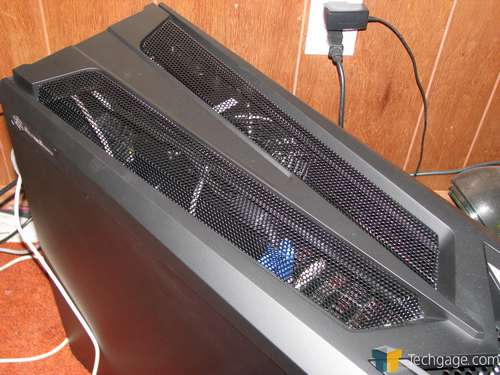 Firing up the heat, here are the results of my testing. 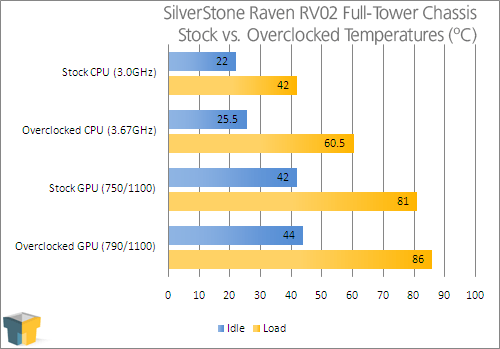 Acoustic testing resulted in a reading of 41dB at idle and 42.5dB at full load.

Overall testing went very well and the noise levels were quite low. It is hard to find a good balance between noise and cooling and I feel SilverStone has done remarkably well in this respect. Placing this case prominently on top of your desk for all the world to see will not harm your senses and will put a smile on most any enthusiast’s face.