With the major success SilverStone’s Raven series has experienced in the past, the RV03 has a lot to live up to. A full-tower on its side, the Raven 03 orients your motherboard to exhaust heat out the top, and as a result, makes installation an interesting process. Let’s take a look and see if this gold-trimmed $130 offering hits its mark.

‘Be that word our sign of parting, bird or fiend!’ I shrieked upstarting –
‘Get thee back into the tempest and the Night’s Plutonian shore!
Leave no black plume as a token of that lie thy soul hath spoken!
Leave my loneliness unbroken! – quit the bust above my door!
Take thy beak from out my heart, and take thy form from off my door!’
Quoth the raven, ‘Nevermore.’

While I can’t guarantee an Edgar Allan Poe-like experience during the course of this review, I can guarantee an up-close-and-personal look at a raven; the Raven RV03 full-tower case from SilverStone to be precise. Available with or without a window, the Raven 3 picks up where the Raven 2 left off with another unique internal layout that supports micro-ATX, ATX and extended-ATX motherboards.

Fans of the Raven series will notice the gradual evolution of the exterior to what it has become today. The newest Raven tries to bring a little bit of refinement and flair to the nest by adding gold accents on each side of the plastic front panel that extend up and over the top, all the way to the back. This is a small but drastic departure from the all black scheme of the previous offerings. 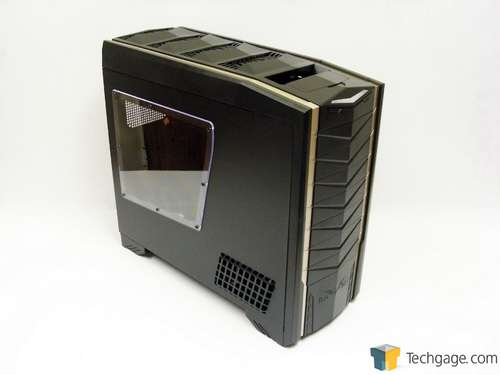 At the very top is a frosted V-shaped plastic accent that glows white when the system is powered on. Below this are the power and reset buttons with seven 5.25″ drive covers taking up most of the front panel. The drive covers are two separate pieces and the solid front plate can be removed leaving a mesh insert for extra airflow.

For those who like a uniform exterior, the front plate of the drive bay cover can be used to stealth an optical drive or in order words, make it look like one is not installed. Behind the covers for the bottom six 5.25″ bays are two pre-installed 5.25″ to 3.5″ converters, which is a welcome feature since seven optical drives or fan controllers would just be silly. 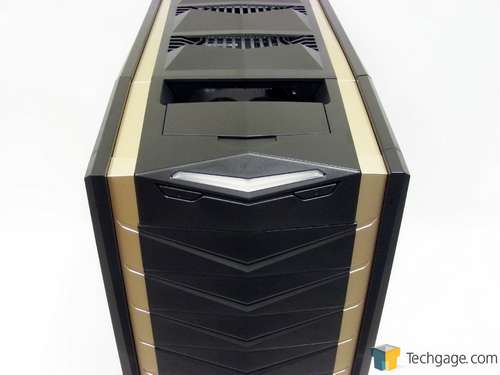 Rounding out the front is the Raven logo towards the bottom that returns from the previous version. 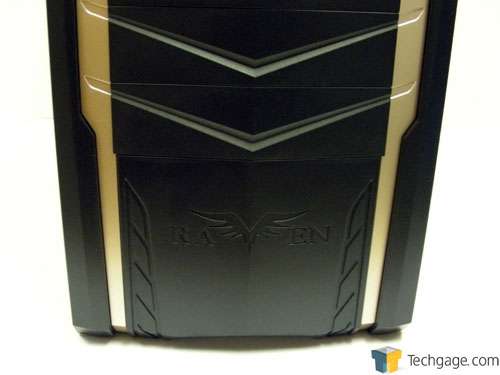 On the left side of the case is a large trapezoid window that shows off the interior. The original Raven had the motherboard facing in this direction while the second had it flipped and facing towards the right. This time around, SilverStone has opted to go back to the original configuration. The only other point of interest is the angled vent at the bottom front corner for the power supply to exhaust warm air out of the system. 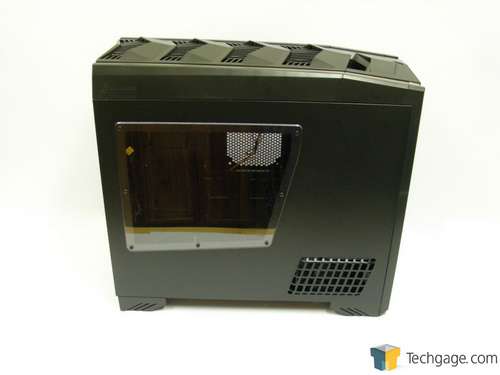 Due to the internal layout, which will be looked at shortly, the rear of the case is very plain with only a small opening at the top to route cables and double as a handle, a grill for mounting a 120mm fan and a small rectangular grill to the left. 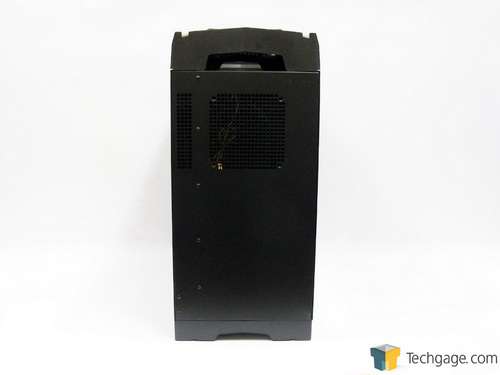 Over on the right panel in the center is a grill to mount another 120mm fan to cool the back of the motherboard with a second angled vent towards the lower front. Again, due to the internal layout, a 25mm thick fan can be installed on this panel instead of a thin 15mm as found in many other cases. The extra thickness usually equates to more airflow, so this should help to keep temperatures down even further. 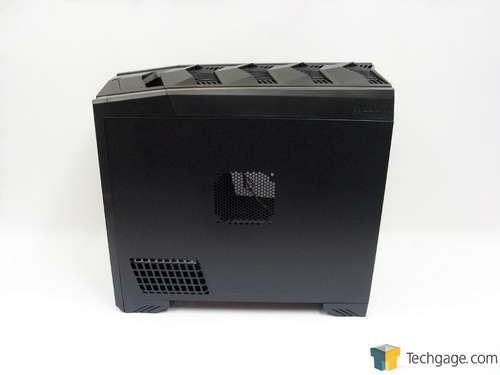 Up top at the front under a flip cover are two USB 3.0 ports and the 3.5mm microphone and headphone jacks in between them. Connectivity for the USB ports is provided by two cables that connect to available USB ports on the motherboard I/O. If no USB 3.0 ports are available, the cables can be connected to USB 2.0 ports, but the front connections will operate at slower speeds and lower voltage. 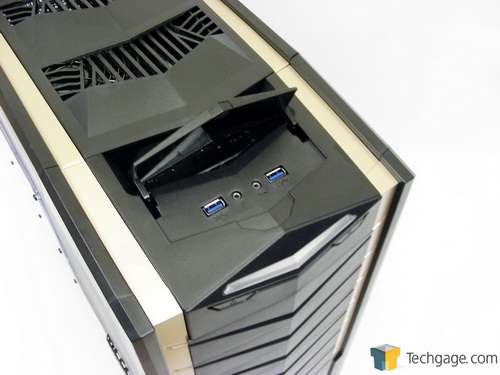 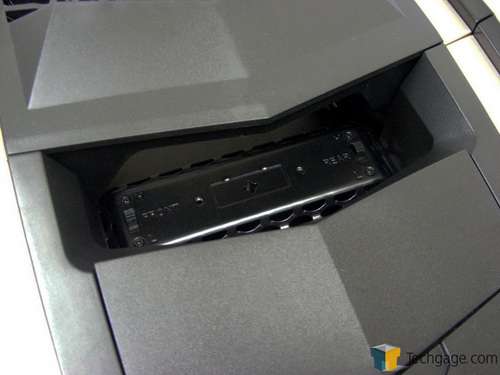 The rest of the top is taken up by the vented plastic cover. This hides all of the connections that would normally be found on the back of standard chassis. Since the cover is vented, it also allows warm air to be exhausted up and out of the case, taking advantage of its natural movement. In order to remove the side panels, the top cover needs to be removed by pulling up at the front and again on each side near the back. The thumbscrews holding the side panels can then be removed and the panels pulled up and away. 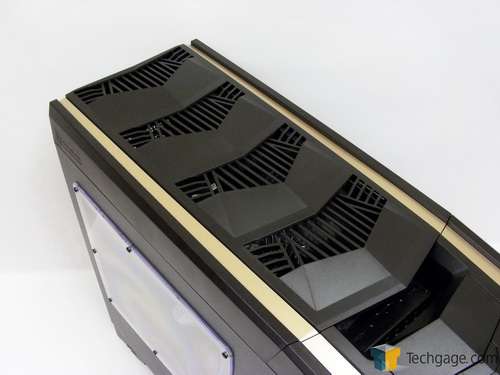 Flipping the case over shows off the four rubber pads attached to the moulded plastic feet that lift the Raven 3 well off the ground to provide extra air flow for the power supply and bottom fans. Both openings for these are covered over by two fan filters made of a plastic frame and wire mesh and held on by magnets meaning they can be easily removed from the left side without having to move or tip the case. Finally, in front of the forward filter is the recessed 3-prong power connection. 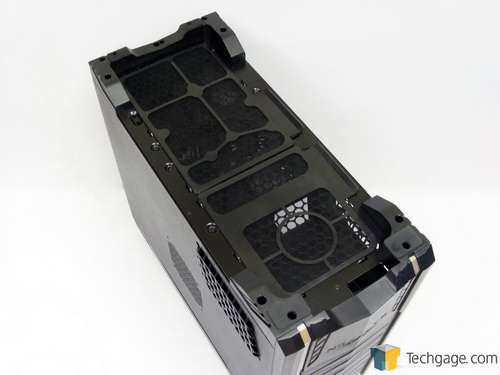 As is usually the case with SilverStone products, no matter how much is going on outside, there is tons of fun to be had on the inside, so let’s look at the interior next and see what it is like to build in.