Reader Warning: This review of SiN Episodes has content and visual representations of the game that may not be appropriate for all readers. The game carries a Mature ESRB rating for Blood/Gore, Strong Language and Sexual Themes. The article may reflect this, so please read with discretion.

It’s hard to believe that it has been a full eight years since the original SiN was released. The game was a marvel when it was first released, for a few reasons. Probably the first and most intriguing thing about the game was the foxy Elexis Sinclaire that graced the cover. Paired with great graphics and top notch action, the game was an instant hit. SiN was the first game to introduce body specific hit zones. This meant that depending on where you target the enemies body, it would affect the damage given. This was an important new feature that paved the way for future games. 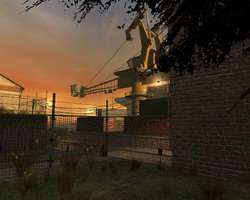 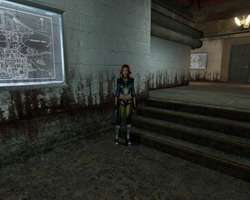 Well, SiNs back with the same cast of characters as seen in the original, along with new addition Jessica Cannon. Whereas the first SiN was based off a stand-alone game engine, so is SiN Episodes. Ritual took the Valve route and based the game on the Source engine, which Half-Life 2 and Counter-Strike: Source use. This is a rather wise choice for them to make; The engine is packed with some great features and proves very customizable.

Once again, you start as Col. John Blade.. protector of the universe! Well, actually, your main goal is to protect the people of Freeport City, but the universe would be far more interesting. It’s been four years since Johns first encounter with the gorgeous Elexis, whose primary goal is to mold humanity into her distorted vision. The law has tried to stop her in the past, and failed consistently. So of course it’s up to Blade to take matters into his own hands and take her down.

Sinclaire runs SiNTEK, an empire that Sinclaire is using to help her conquer whatever she pleases. Your hacker friend JC is back from the original to help you throughout your missions, though in the first episode he does very little helping. Alongside you this time also is the fiery Jessica, and does she have a hardcore attitude! Within five minutes of the game you will hear her drop the f-bomb, and that’s only the very beginning of her potty mouth. She puts up with nothing.. nothing!

If you have played the original SiN, you know what to expect here already. Since the original SiN, the entire game has been refined so you can expect game play quality to come close to Half-Life 2. Back again is the body specific damage system, so targeting various areas of your opponents body will reflect how much damage you deal, and their reaction to your fire. For example, my personal favorite is a nice, clean head shot. When you aim for the head straight on, sometimes the enemy will literally flip over backwards. It’s a great result that urges you to continue trying for head shots. 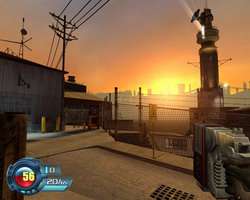 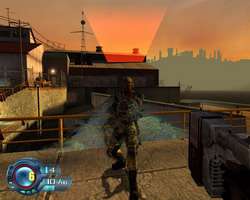 Since the game is based on the Source engine, the usual slew of system options are available to you. The options available are spot on to what HL2 offers, although it’s lacking anything related to HDR. SiN Episodes is more than just a total conversion though, because there are some added elements that we did not see in Half-Life. The most notable are the breast physics. Yes, I said breast physics. At the very beginning of the game, you are conked out on a hospital bed. The very first animation you see is Elexis looking at you with her bouncing cleavage. I guess you could say this is what really makes SiN stand apart from Half-Life 2.

Ritual did stick to what succeeded in SiN 1 though, because even though we are 8 years since the original release, this game feels exactly as you would expect. If you can remember the mass amounts of enemies from the first game, don’t worry, they are back. In fact, this is one of the few things I am not particularly crazy over. The action is non-stop, with continuous flocks of enemies out to kill you. I won’t go as far as to say that the monster system is as bad as Serious Sam 2, but it’s pretty close. Either way, the first SiN was exactly like this, so Ritual stuck to it.