There’s around 10 total enemy types in the game, and some are straight-out crazy. One of my favorites proved to be the jet packers. Basically, these are human enemies that are equipped with a jet pack, so they can literally fly through the air. Why they are so interesting though, is because if you shoot the actual tank on their jet pack, you in turn puncture it. This is an interesting way to kill the enemy, because due to the seeping air, they will fly around sporadically until the tank finally explodes, which will end up taking their life. It’s a very cool addition to the game that makes killing way too much fun. 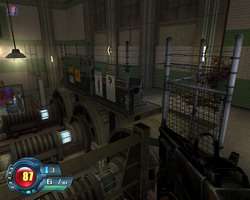 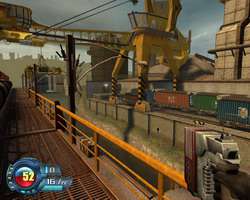 There is one particular monster in the game called the SiNTEK Heavy Gunner. All I have to say about those are.. wow. These are by far the most difficult enemies in the game. They are comprised of metal, and can stand back and plow you down with their machine gun. They take a fair amount of bullets to kill, at least 3 good shotgun blasts to the head. The problem is, they can do so much damage, you can die very quickly. I encountered one and it took half my health in one shot. Of course, you may say, “Just hide behind something”. This could be the case most times, but usually they don’t come from a single direction, but rather multiple. On top of that, you may have to battle up to three of these guys at once. In one level in the game, you have to kill at least 10 of these alongside Jessica… which is very stressful.

Superb AI is one thing that has been touted for SiN Episodes, but I don’t know if I would consider it as such. On one hand, sometimes the enemies are unbelievably smart. They have great aim, and work with their posse in order to gang up on you. Trust me, this works. But on the other hand, there were many instances when I think the enemy was confused. At times, I would walk directly in front of an opponent, and they wouldn’t fire at me for at least 3 or 4 seconds. I also had multiple instances where these baddies tried to shoot me through the wall. They would not get the hint to just come around the corner, but rather would just sit there continuing to shoot at the wall. Overall, despite some of these bizarre bugs, the enemy AI is mostly well done. 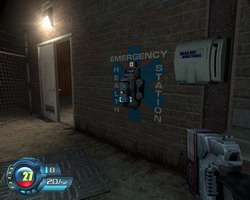 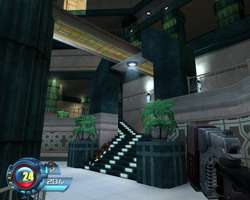 One thing that may turn some players away is the fact that the game only has three primary weapons. The infamous blaster pistol is back, in addition to the shotgun and the assault rifle. Oddly enough, you can’t even use your fists for battle as you could in the original. This is likely due to the fact that you can ‘butt’ people with the back of your gun, such as you can do in Halo. Of course, it’s not just John who can do this. If you get close enough to an enemy, he’ll do the same back to you for some awesome damage. Considering that there will be a total of 9 episodes, I am sure we will see the return of the other weapons in the future.

One standout feature for SiN Episodes is the dynamic difficulty. This is one feature that actually proves to be incredibly cool, although at times it can be a complete pain. In general, the difficulty for the game can range between 1 and 100. The first time you begin a new game, it starts you off at 20, unless you change it. This is considered ‘Casual’, and after playing it, I believe it. As you progress through the game though, the difficulty will raise or decrease depending on your skill. At first, I began the game on the 50/100 difficulty, but quickly realized that it was much harder than I expected. So, within an hour of the game, I restarted using the default 20/100. 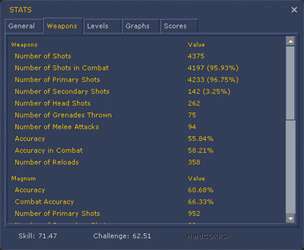 Now, obviously the game wasn’t too difficult right off the bat. But quickly the game determined that my skill was 80/100, so that default 20 that I chose was automatically rising. I have no immediate problems with this, because obviously a game should be a challenge in order to make it feel like you actually accomplished anything. Within a few hours of the game though, it still determined I was 80/100, and it bumped up the actual difficulty to 50/100.. the setting I ended up restarting the game due to. So, I was stuck with 50/100 for the time being, which makes the game quite difficult. All in all though, this will teach you to be perfectly wise, and will help you learn how to deal with certain situations you encounter. If you don’t learn, you are going to die, there is no doubt. 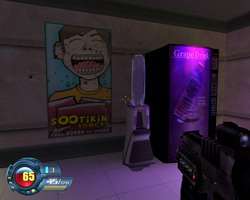 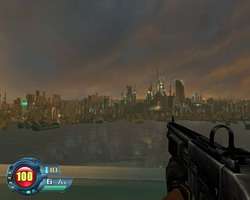 So in the end, regardless of how good of an FPS player you are, this game is going to prove an absolute challenge. This is a good thing for the most part, but I found myself in a few situations that I had to try 10 times over in order to finally beat. SiN Episodes proves to be one of the most difficult FPS games that I have played in a while. One of the reasons for it’s difficulty though, is the mass amounts of monsters in the game. If those were scaled down, I believe the game would be more fun overall.

Each level in the game has various secrets you can find. Most will be areas, and usually will have a weapon crate lying around. You know it’s a secret area because it notifies you directly on the screen. Throughout my game play, I found only one easter egg, which was of the infamous Dopefish. I am sure there are others out there, but easter eggs as such really show Rituals sense of humor. I am unsure what the secrets unlock, but I didn’t come close to finding half of them. 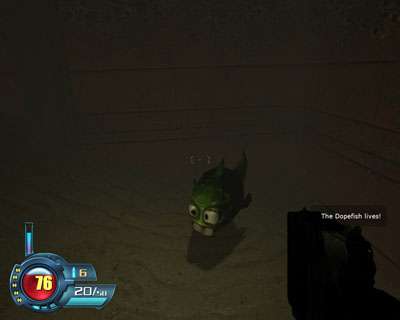 In Half-Life 2, you would find health stations on walls which would regain your life. SiN Episodes has exactly the same thing, although with a twist. The Emergency Health Stations you find throughout the game will have a canister of blue goo in it. If there is any of the goo left, you can use the station to regain your life. If the canister is empty, then you can remove it, and replace it if there is another handy. This is quite cool. At some points when I was really low on health, I went back a few rooms to find a canister and bring it back to the station. Some rooms have far more than one full canister lying around, so it pays to carry one along with you sometimes.

Overall, I like the game play that SiN Episodes offers. The only thing I would change would be the ability to ‘ask’ the game to lower the difficulty during game play. Sometimes, even a seasoned player doesn’t feel like going through a personal stress test.