Sleek, Stylish, If Slightly Strange – A Review Of The In Win 707 Full-Tower Chassis

In Win may not be as well-known as many of its competitors in the PC chassis market, but it makes some eye-catching products. Its 707 is certainly one of those. Styling-wise, it’s a knockout. But the beauty of a PC chassis is more than just skin-deep. Join us as we get inside the In Win 707 and put it through the Techgage wringer.

I’ll be reviewing the In Win 707 on a few key criteria: ease of system installation; cooling performance; a subjective evaluation of its noise output characteristics; and a few miscellaneous comments about the chassis’ build quality.

First, though, a look at our test system’s components:

And here’s a look at how everything looks in the In Win 707: 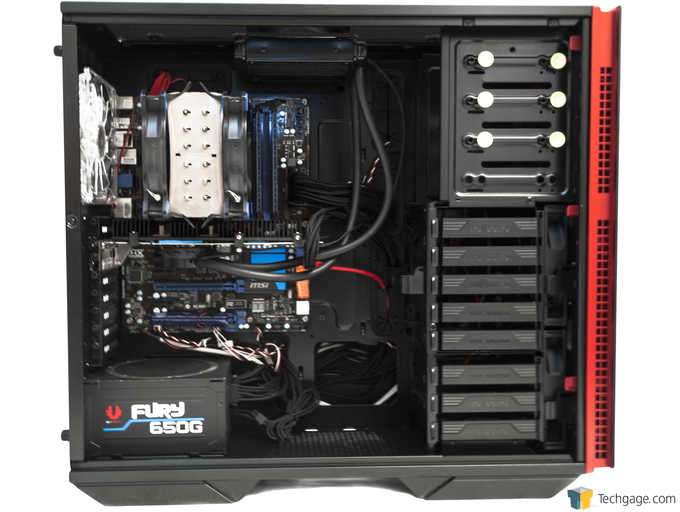 It took around an hour to install our test system into our review subject. I’d say that’s about average for me. I didn’t experience any specific difficulties, although I was a bit miffed at mounting the GPU’s radiator on the roof. The 7o7’s fan screw holes have a non-standard bore, so the normal fan screws just go right through as they’re narrower than the holes. If I had read the manual, I’d have known that In Win provides washers for these fan screw holes. Overall, though, the installation phase was easy enough. I just wish the chassis’ cables were all dressed in black. Cable management as a physical exercise was easy enough in this chassis, but seeing all those colors against the black background was (and remains) a bit of a sore spot for a cable management fetishist like me.

Speaking of cable management, the task is aided by a 1 3/8″ gap between the rear of the motherboard tray and the side panel. The following photo offers a look at this gap. 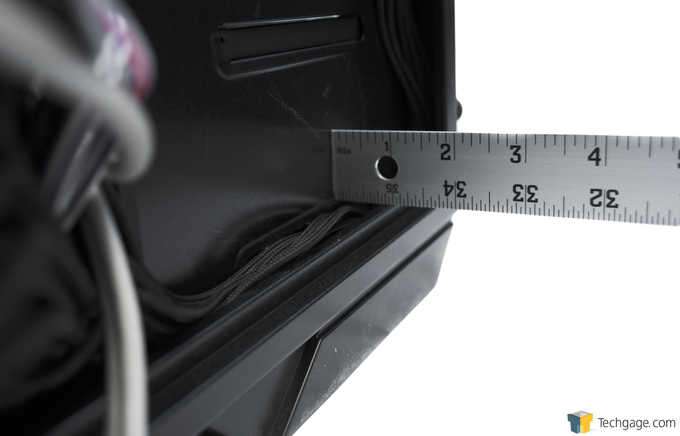 Moving on to thermal testing, I will use the OCCT CPU stability test program to generate maximum CPU load and temperatures as well as MSI Kombustor for the GPU temperature testing. Ambient temperature will be kept constant at 72°F/22.2°C.

A preliminary note about thermal testing: A PC chassis being reviewed ought to be in as close to stock configuration as possible. That means I won’t add fans to the system (other than what comes with certain components’ cooling systems). Also, per my now routine practice, I’ll also use the same torture tests to put the CPU and the GPU under maximum load conditions. OCCT is the torture test of choice for the CPU, while MSI Kombustor fits the bill for the GPU. 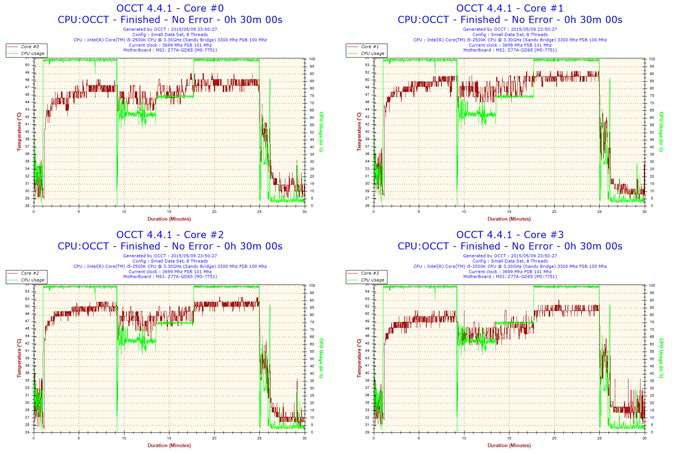 Across the four cores of the i5-2500K, the maximum temperatures registered were 49°/52°/52°/52°C. The following table shows how this performance compares to other chassis I’ve tested with the test system in an identical configuration:

The In Win 707 gives nothing away to its competitors in the maximum CPU temperature tests, registering a paltry 1°C shy of the best performers. That one degree Centigrade is fairly insignificant unless you’re chasing the absolute best performance.

Moving on to the maximum GPU temperature tests, the test system in the 707 registered a maximum of 74°C. 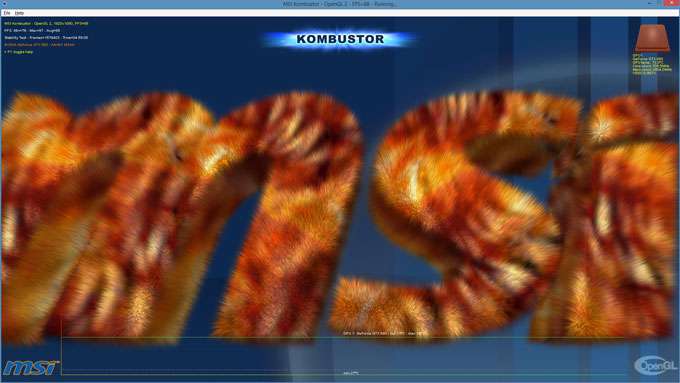 And here’s how that compares to the rest of the chassis for which I’ve gathered maximum GPU temperature data:

Noise-wise, well, the In Win 707 keeps the test system mostly quiet. However, one (or both?) of front its intake fans emits a weird drone. The sound is a little tough to describe, but it’s a distinctive signature unlike any fan noise I’ve heard before. Not only that, but the pitch also oscillates, almost as if the fan is changing speeds. If you keep your PC on the floor you probably won’t hear this drone; if you have it on your desk, you’ll hear it. And get a bit annoyed with it, I must say.

The droning fan(s) notwithstanding, the 707 is solid, with no real problem areas. The plastics used, in particular, seem to be high-quality. There is a fairly good variance in the quality of plastics used by the various chassis manufacturers. In Win’s plastics don’t feel cheap and make you think they’ll last a long time.

Let’s wrap things up with some final thoughts.