Sleek, Stylish, If Slightly Strange – A Review Of The In Win 707 Full-Tower Chassis

In Win may not be as well-known as many of its competitors in the PC chassis market, but it makes some eye-catching products. Its 707 is certainly one of those. Styling-wise, it’s a knockout. But the beauty of a PC chassis is more than just skin-deep. Join us as we get inside the In Win 707 and put it through the Techgage wringer.

If it was a car, I see it as the inverse to a Bugatti Veyron: It’s sleek and stylish, but doesn’t quite thrill you with many of its engineered details. I mean, there’s nothing fundamentally wrong with the 707; it’s just not exciting or innovative. Indeed, some of its details strike me as a bit strange. In Win might be trying to “different,” but truly the ways the 707 is unconventional compared to its peers are just weird and, it must be said, very old-fashioned.

Looks-wise, the 707 is as modern as they come. It’s very pretty, unlike the Veyron. In Win classifies it as a gaming full-tower, but it’s not really styled like a spaceship that Klaatu and Gort might use. Generally speaking, the “gaming” tag usually means the product to which this designation is attached looks over-styled, garish, and often just ugly. Rather, the 707 is sleek and stylish, with just enough visual flair that keeps it distinctive. The red accents on the black bodywork are a visual treat; the subtly asymmetric presentation of some of its bodywork detailing is also very interesting. I have a feeling that the 707’s styling will age really well. 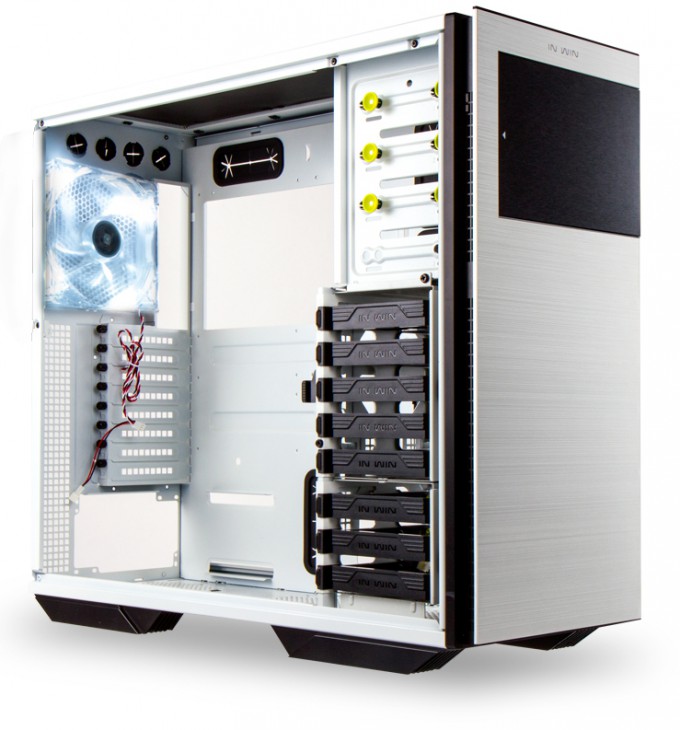 It’s well-built, too. It feels like a tank, but happily doesn’t weigh as much as one. I love how its engineered bits – the side panel fits, the feel of the thumbscrews, even how the drive sleds slide in and out of their cages – just feel good to use.

If I were to register any complaints, they have to do with some rather strange details. The rear exhaust fan’s Molex power connector, for example, strikes me as a fossilized relic from a long-gone chassis design epoch. That’s just an unnecessary deviation from the norm. Another annoyance to me are the multi-colored cables. For cable management sticklers, black interiors demand cables dressed in black. The idea is to use a monochromatic color scheme to hide the cables in plain sight. That’s impossible if you’ve got rainbow spaghetti for cables.

Also, it’s a little strange (though it probably shouldn’t be) to need to consult a user’s manual to build your system into a chassis. But the 707 has enough idiosyncrasies that you might be required to. The non-standard fan screw holes on the roof certainly qualify, as does the old-school need to install all of the motherboard standoffs. The non-standard fan screw holes, in particular, are singularly annoying. Just like the Molex connector for the rear exhaust fan, there’s just no good engineering-based reason to opt for what is essentially a proprietary solution here. The conventional ways work just fine; there’s no need to reinvent the wheel, so to speak. In Win could just stick to what’s tried and true. Often the simplest ways work just fine. 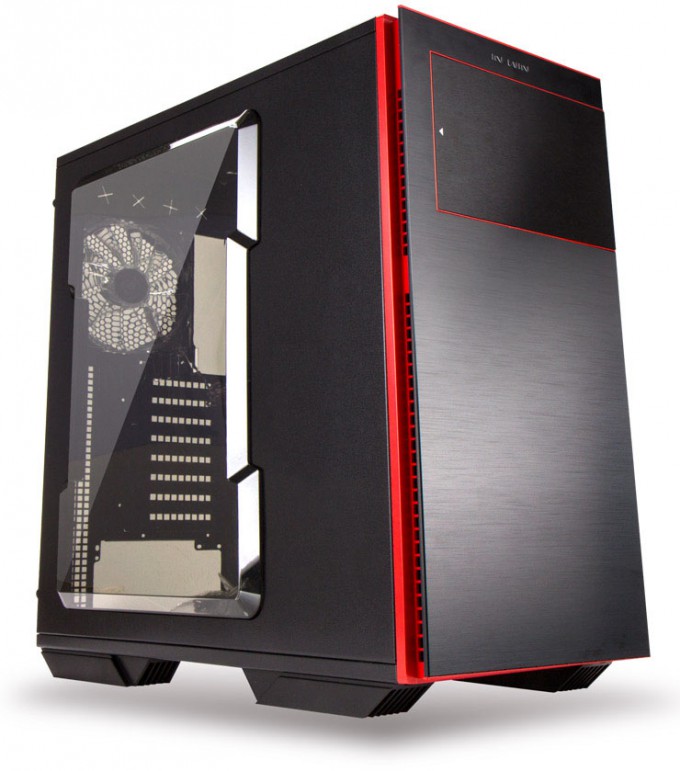 In Win may not be a giant in the PC chassis market, but with a product like the 707 it’s surely a vendor worth watching. The 707 is a well-built offering that hits a lot of high notes; it’s slightly off-key with some of the details, but with a little bit of polish and study the 707 can be the basis of a superior product. MSRP is $139.99, but I’ve found it for as low as $99.99. That’s a very good value for a full-tower chassis.

It’s not perfect, but the In Win 707 is still worth a look. Given that it’s so sleek and stylish, I’d wager that it will get a lot of looks of admiration, too.