“Winning isn’t everything, but you could at least pretend you’ve heard of it.“

With the success of open-world titles such as Grand Theft Auto, Saints Row and Just Cause, developer United Front Games had big hopes for True Crime: Hong Kong, set to be published by Activision. Wait – True Crime? Yes. You could say the development story around this game might be more interesting than the in-game story.

Hoping to reinvigorate the True Crime series, Activision had plans to merge United Front Games’ newest title into it – even going as far as announcing it and releasing a trailer (and eventually changing the naming to just “True Crime“). As time went on, and delays plagued the release, Activision gave up on the project. Some rumors state that the game was almost finished, and could even be completed by players in its current state.

To the angst of gamers everywhere, with thoughts of what could have been, this happens often in game development. What also happens on occasion is that another publisher will spot the diamond in the rough, inherit the project, and ultimately publish it. That’s what happened here; when Square Enix first laid its eyes on the game, it’s been said that it was a done deal right from the get-go. There have even been quotes from Square Enix calling Activision “crazy” for abandoning not only a game so far in its development cycle, but a game with such potential. 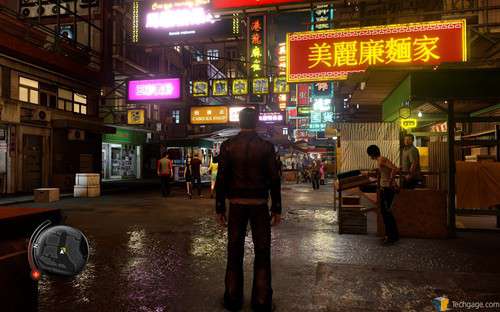 Those who enjoy open-world games such as the titles mentioned above will be pleased with Square Enix’s decision on this one, because Sleeping Dogs is a great game, offering just enough uniqueness to set itself apart from the games it’s going to inevitably be compared to time and time again.

What’s not so unique is its story, but it involves a not-so-unique mechanic that makes it unique (get that?). You’re Wei Shen, a Hong Kong-born undercover cop that lived in America for so long that his accent is almost non-existent. Back in Hong Kong, Shen’s job is to get in good with the Triad gang Sun On Yee (based on the real-life gang Sun Yee On) and ultimately take it down. 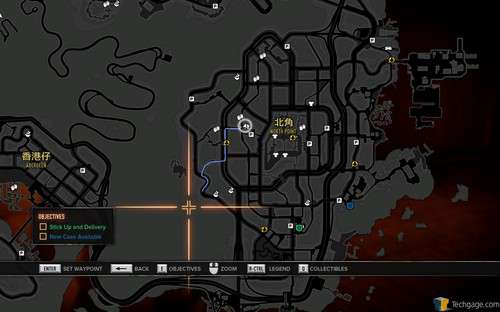 Throughout the game, Shen will have to perform duties for both his gang and the police department, and as missions are completed, XP will be earned for the respective skill tree (Triad or Police). Each of these are split into two sections, and as each level is earned, you’ll be able to unlock the next available skill in either section.

Where the unique comes in is that ultimately, you may sway more to one side than the other, depending on your playstyle. When on a police mission, if you run into people or damage the environment, XP is taken away from that tree. This doesn’t matter much, as Police XP comes easier than Triad XP. In addition to these there’s also a “Face” tree, which is leveled up based on various actions throughout the game; when a new level is earned here, it adds a new self-benefiting ability, such as having buffs last longer.

Buffs, you ask? Yes, Sleeping Dogs is more RPG-like than most other open-world games, with the game coming close to the mechanics Saints Row 3. By either eating or partaking in some activity, Shen can earn buffs that increase his damage, helps him regenerate health or boost other abilities. Each buff disappears after a certain amount of time; faster if it’s more beneficial. While it’d be nice given the difficulty of some fights, there are no healing items that Shen can keep on him. 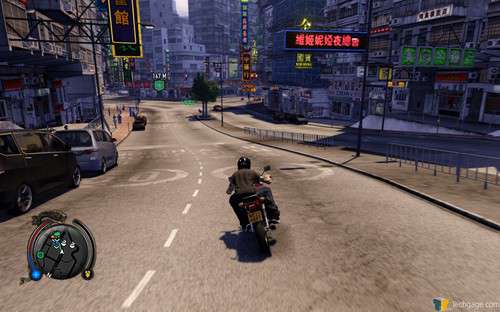 One thing that sets this game apart is that it takes place in Hong Kong, while most open-world games, such as Grand Theft Auto, Mafia II and Saints Row, take place in more Americanized locations. If you’re indifferent to Asia, this might not matter, but if you do happen to love the cities of any Asian metropolis, you’re going to be pleased with the world here. I’d argue that this is the most detailed open-world game ever, as the cities feel genuine with their layouts and design, and rarely did I stumble on anything that I knew was a direct copy / paste (things like advertisements aside).

Adding to the realism, most of the NPCs in the game speak Cantonese with no subtitles, while all important characters speak in clear English with occasional Cantonese thrown in. This is appreciated, and to me, required. It’d feel a bit odd to traverse through Hong Kong and never hear the official language.