Given the location, you can probably already guess what sorts of environments you’ll stumble on in the game. Near the start, you’ll find yourself in a night market, and throughout you’ll visit commercial districts, touristy spots, off-shore gambling dens, slum-like areas, docks and so forth. Overall, the in-game world isn’t particularly large (I’d say it might be a tad larger than the in-game world of Saints Row 3 and 50% larger than Mafia II – rough estimates!), but what space is there is used very effectively.

While the world is based on Hong Kong, and the four district names are based on real-life locations, the layout and design is purely fictional. For the most part, you’ll spend a lot of time in each district, one at a time, but you will end up going from one to the other on a regular basis. Each district has a “home” for you, so if you die there, you won’t be brought all the way back to your original apartment (and it’s a good thing, as it’s dingy).

The combat in Sleeping Dogs is also quite a bit different than the norm, as guns really aren’t a major focus. Instead, hand-to-hand combat is. Much like the combat in the just-reviewed Darksiders II, you have a range of combos that can be performed here, with some to be unlocked as you earn XP or when you return a lost Jade Statue to a fighting master. For the most part, these are easy to execute – if you’re not being ganged-up on. If you master them, though, you’ll be able to clear through packs of thugs a lot easier than if you were simply punching and kicking. 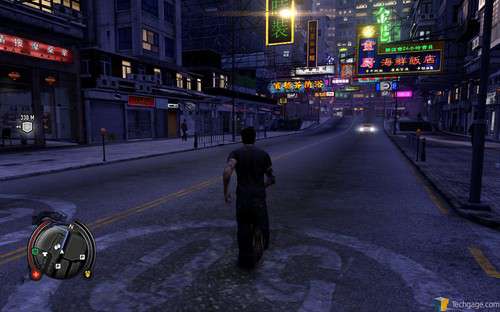 That all said, the combat in Sleeping Dogs is difficult, in turn making the game difficult. On one hand, you’re regularly being ganged-up on by four or more people, and to make things worse, you lose health fast. Crazy fast if weapons are involved. This is where I tell you that weapons are important – not guns, but anything that your foe might drop. If there’s a crowbar or knife on the ground, pick it up, because while it’s in your hand, you’re literally three times as effective (rough estimate, but seems accurate to me). Weapons can usually break someone’s block after a few whacks, whereas your fists cannot.

Adding to the difficulty also is that if you die (which is easy), you won’t be able to retry the challenge again immediately unless it’s an official Triad or Police mission. Death during side missions, such as those that help increase your Face level and “Drug Busts”, will spawn you at the hospital. If you save your game before such a mission, reloading it will start you back at your apartment, requiring you to run or drive back to the mission if you want to try it again. 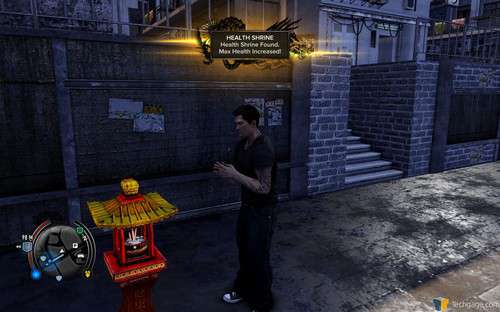 The combat difficulty here can’t be understated. I’m generally a person who loves challenge, never playing a game on anything below “normal” and most often on “hard”, and even I find some of the combat damage inflicted on you to be overkill. If you’re caught in a bad situation where you end up getting hit three or four times in a row, you’re almost as good as dead. Because of this, I actually spent time perusing the world just to find Health Shrines, as every five will increase your health by 10% (to a maximum of +100%). Even then, I die a fair bit, so it just goes to show that skill and very quick reflexes will help you out a lot here.

Combat aside, the game features many other mechanics to help keep things interesting. You’ll be able to drive cars, trucks, bikes and boats – and even have the ability to leap from one to another while driving. As with any good open-world game, there are many things to distract you from your main quest, such as street racing, betting on cock fights, gambling in a game of poker mahjong, singing karaoke and more. Throughout the game you’ll also be required to lockpick or hack something, with the mechanics for each being rather simple (and mostly unneeded, but it does “add” a little interactivity). 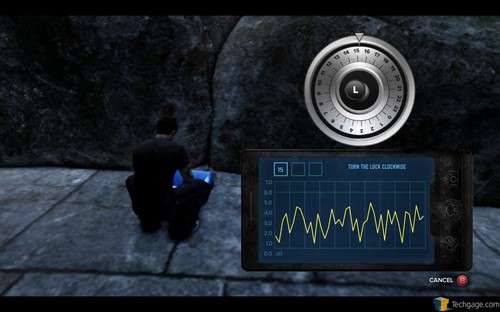 A mainstay of many open-world games can also be found here: radio stations. When in a vehicle, you’ll be able to peruse eight or so stations of varying genres. You’ll have punk, rock/metal, Asian, classical, hip-hop/RnB, electronic, jazz and others – a good mix overall, but nothing too exciting (to me, personally).

Speaking of driving, this is going to be one aspect of the game some people will have a problem with. Some of the developers behind Sleeping Dogs were previous developers on certain Need for Speed titles, and that shines through. The mechanics are very arcade-like, so don’t expect any sort of realism here. That said, the driving is considerably better than it is in Saints Row 3, but it’s not quite as tight as it is in Grand Theft Auto IV or Mafia II.

Other quirks include the combat difficulty as mentioned before, and also the fact that the game, like many third person games, is not really suited for a mouse and keyboard. While you can play with that configuration, a gamepad such as the Xbox 360 controller is a much better choice, and will be easier on your hands after a while (namely because of the combat). The game also lacks fine-tuning of the anti-aliasing, which is unfortunate. At “Normal”, FXAA is normal, whereas High has FXAA high and SSAA normal. Extreme is FXAA high and SSAA high – requiring a very powerful GPU configuration if you are using a higher resolution. Ideally, we should be able to control FXAA and SSAA independently, but no cigar.

In terms of stability, the game has been quite good, crashing only once for me in the 20 hours I’ve played it so far (not that a single crash is a good thing).

Leading up to the launch of Sleeping Dogs, I could taste the game, I wanted it so bad. What can I say – I’m a sucker for open-word games, having become a relative fanboi of Mafia II (despite that having no side-missions) and loving Saints Row 3 and similar titles. Does the game live up to my self-hype? Yes, yes it does. In fact, it actually surpasses my expectations in many ways, namely with the graphics and the major focus on hand-to-hand combat. 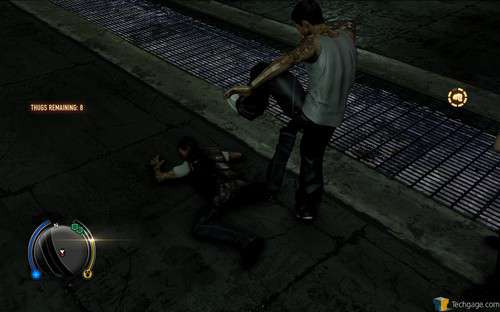 The game does have some faults, as mentioned above, but I’ve encountered no major ones so far – just little niggles. While the combat difficulty is borderline asinine at times, the rest of the game helps overshadow that qualm. The story isn’t the most unique out there, but it is pretty interesting with a couple of twist and turns I at least wasn’t expecting. The driving mechanics won’t be for everyone, but I’ve enjoyed them quite a bit – even finding them a little refreshing.

The key to a quality open-world game is that it offers a lot to do. This game isn’t linear – you can choose to do Triad missions now, Police missions, go off to help random folks out, or search each of the four districts for hidden objects (briefcases, Health Shrines and Jade Statues). Or, you can drive around aimlessly, go gamble, partake in some street races, sing at a karaoke bar and so forth. There’s enough content here for anyone to spend at least 30 hours on, and probably double that for completionists.

If you enjoy open-world games like any of the others mentioned throughout the review, and appreciate a more adult-themed game (this is quite gritty), and don’t mind playing with a gamepad, Sleeping Dogs should not be missed.