Page 1 – The NUC5i5RYK, Introduction and Details

Small Form Factor (SFF) computers have come a long way since the early days of computing, where small and mobile was classified as two suitcases and a personal bodybuilder to carry them. Now, small really does mean small. However, small desktops have always had a bit of a stigma attached to them; it’s a desktop, why does it need to be small?

As anyone who’s worked in an office will tell you, desk space is often at a premium, and the last thing you want is a full tower under the desk ready to be kicked by angry employees; so what’s a company to do? Enter the SFF desktop, and an entourage of different sizes; starting at mATX, various ITX standards, and one under review today, the Ultra Compact Form Factor (UCFF): the Intel Next Unit of Computing (NUC).

The NUC has been around since 2012, but it recently had an upgrade and now sports the all new Broadwell-based CPU architecture, or Intel’s 5th generation Core processors. The specific model under review is the NUC5i5RYK, which features the i5-5250U CPU, a 14nm scale CPU in one of the smallest form factors I’ve seen for a full x86 system.

The NUC next to a Raspberry Pi for comparison.

The size of the system means that normal desktop components are not going to fit. In fact, even normal laptop parts won’t fit – that includes 2.5-inch hard drives with this specific model (larger NUCs support such drives). Sourcing parts for the NUC is slightly more tricky than usual, so we reached out to Crucial for some help.

First and foremost, the system makes use of DDR3L SO-DIMM memory, a specific low-voltage variant of DDR3, running at 1.35 volts. Not all 1.35v memory modules will work, so you will need to be careful. Intel has included a partial list of tested modules on its website if you are unsure. Crucial suggested a couple compatible kits that were not on the list, so if you are in need of some lower CAS latency memory, you can use the same Ballistix kit as in our review. 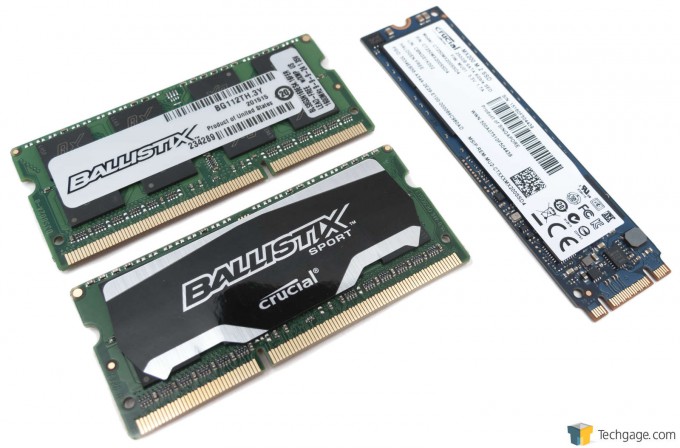 DDR3L SO-DIMM memory to the left, M.2 SATA drive to the right.

With the memory cleared, we still have storage to contend with – what hard drive standard is smaller than 2.5-inches? If you’ve been keeping up with technology trends, then you will already be aware of M.2 drives and some of the standard’s incredible speed offerings. If this is the first time you’ve heard of M.2 drives, we’ll quickly explain.

M.2 is an interface standard for small form factor installations, most notably laptops and netbooks. Quite often, M.2 devices are soldered directly to the motherboard and is generally not user accessible (and often not advertised), but in effect, the standard is a miniature PCIe interface. There are three main sizes, the smallest of which (22×42) is used for I/O and wireless interface technologies (WiFi, Bluetooth, NFC). The larger sizes (22×60 and 22×80) are used for storage.

To confuse things further slightly, there are two storage types for M.2 – M.2 SATA and M.2 PCIe, denoting whether a drive uses SATA or PCIe based transfer methods. M.2 SATA has the same restrictions as other SATA devices, that of 550MB/s transfers over SATA 3.0. The PCIe based drives are not held back by the interface and can exceed 2GB/s transfer rates with some drives – that’s bytes, not bits. The incredible speed and standard interface of the PCIe based M.2 drive is so remarkable, that some high-end desktop motherboards have started to include M.2 slots. 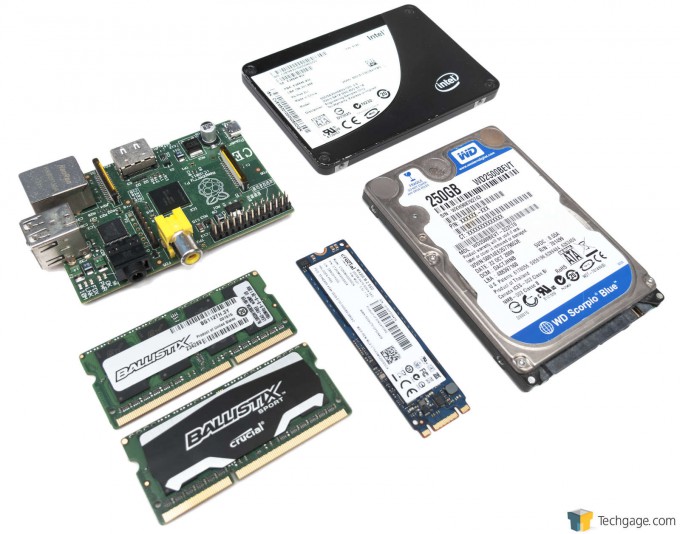 The NUC supports all three M.2 sizes, plus SATA and PCIe-based interfaces. SATA drives are by no means slow – they are still a thousand times faster than a normal hard drive – so don’t go thinking you’re missing out by getting one over a PCIe drive (the SATAs are still quite a bit cheaper). To help us test the NUC, Crucial also provided us with an M.2 drive for this review. 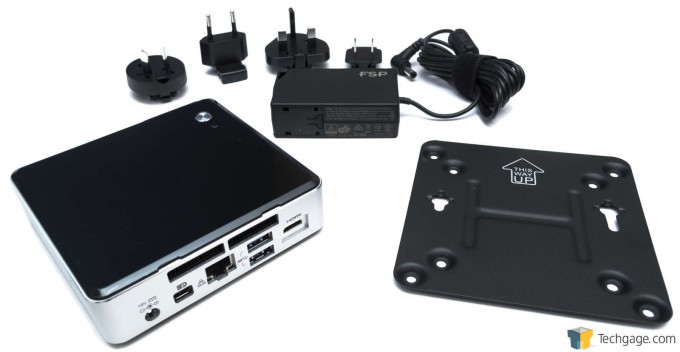 The NUC is a bare-bone system and doesn’t come with a lot out of the box, nor does it need a lot. There is an external power pack that looks more like a large phone charger (with wall adapters for different countries), a VESA mounting plate to attach to the back of a monitor, and documentation. 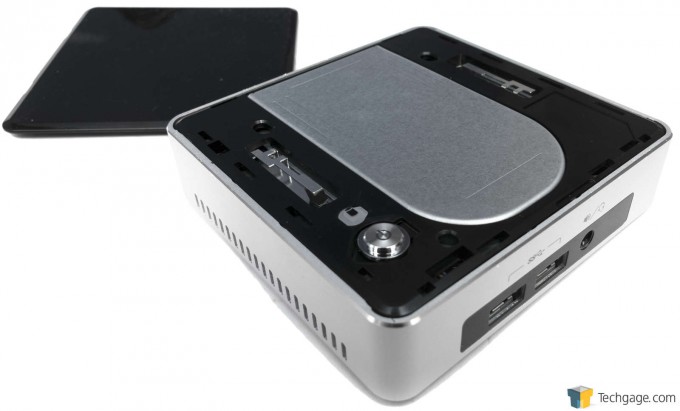 On the front, there really isn’t a lot of connectivity. Two USB 3.0 ports (one of which can be used as a dedicated charging port), and a two-in-one 3.5mm mic and audio jack. The top cover can be replaced for different colors or company branding. What isn’t immediately noticeable is an IR receiver in the blank space just to the right of the audio jack. 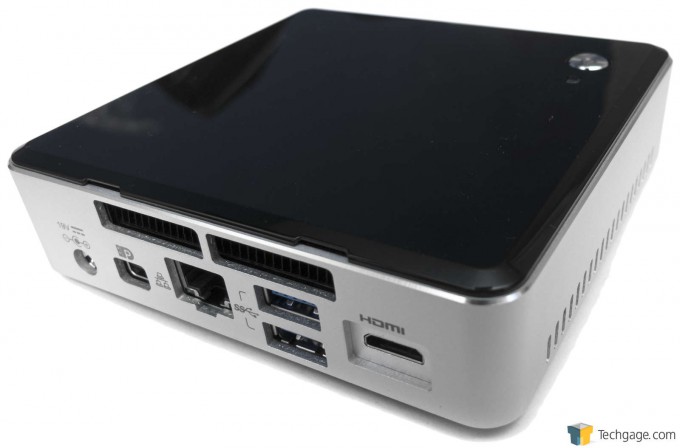 The back is the business end. Two more USB 3.0 ports are available, Ethernet, mini-DisplayPort, mini-HDMI and the power in. If you plan to plug this into a full-size monitor, you will likely need mini to full-sized adapters for either DP or HDMI, so keep that in mind. The exhausted air does get extremely hot at times due to such a compact system, so make sure it’s well ventilated.

If you flip the unit upside down, we can take the screws off and see where the memory and M.2 drive are inserted.

Taking the lid off, we can have a closer look at what's inside. Notice the SATA port.

Removing the motherboard from the case, we can see the exhaust fan, heatsink and battery.

Fan removed we can see the CPU is soldered directly to the board.

Talk about compact – there is hardly any free space left on the PCB. The keen-eyed among you will have noticed something straight away; isn’t that a SATA connector sticking out like a big blue thumb? Yes it is, but if you look how much space is between it and the top of the NUC, you’ll be hard pushed to use it. The connector is usable as part of the other SKUs which have larger bodies to accommodate the drive, so if you want more storage, you’ll need to either get the larger NUCs or use external storage.

The battery is on the reverse side too, you will need to completely dismantle the NUC if something were to go wrong in the EFI (security reset for example). The CPU is soldered down, which is to be expected. That little fan and heatsink don’t look like much, but this is typically a 15W device. However, bump up the power and that little fan can make quite the noise. 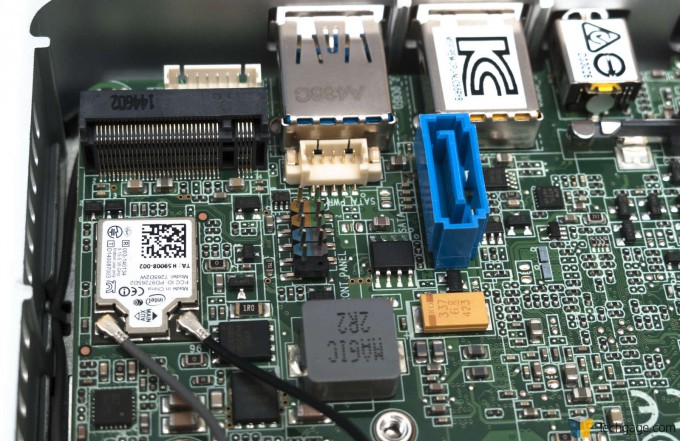 If we move in closer, you’ll see the M.2 connector to the right and the SATA port to the left. Just below the M.2 slot, you’ll see a chip with two wires coming out of it. That is another M.2 device that’s soldered into place, and in this case it’s a multi-band wireless chip for 802.11ac Wi-Fi, Bluetooth 4.0, and Intel’s Wireless Display technology. NFC is handled by an internal header. 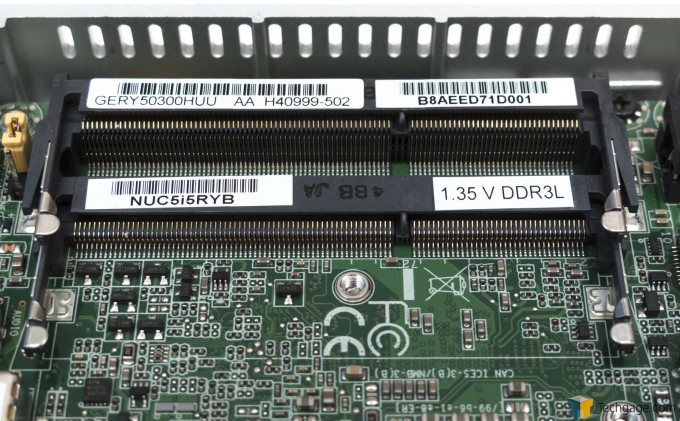 On the other side of the unit, we have two slots for the SO-DIMMs, supporting up to 16GB of RAM. If you check the serial number as well, you’ll notice it says 5i5RYB rather than RYK. This is the motherboard model number. 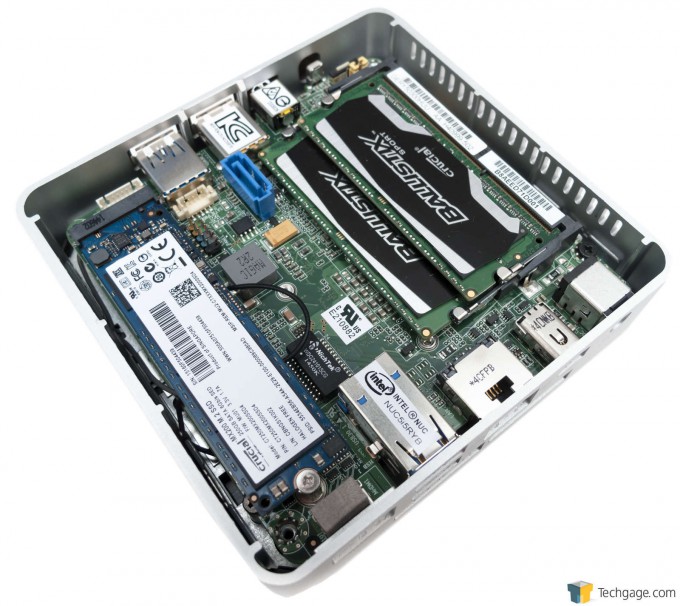 Fitting the RAM and M.2 storage, we can see just how little space is left. If you look to just above the memory, you can see the IR receiver.

The full NUC5i5RYK specification can be found on Intel’s website, but below you can find the basics, plus the memory and M.2 drive we used for this review.

Remember, both display outputs are mini ports, so if your monitor uses a full-sized connector, you’ll need an adapter, such as a mini-DP male to DP female adapter, or a mini-HDMI male to HDMI female adapter.

The main interface for Intel's UEFI on the NUC.

Fan controls. Either presets can be used or more advanced custom profiles. Fixed speeds are available too.

This is where  you can adjust the turbo options and core voltages. In general, it's best to leave these alone at their defaults.

Memory timings. Some overclocking can be achieved by setting a higher memory multiplier and adjusting the main CAS timings.

Power options. Leave these at  their defaults unless  you intend to take the NUC outside its comfort zone.

By disabling the preset profile, you can effectively double the power the NUC can draw. Be careful with the current limiter as you can cause the system to go into thermal shutdown.

Intel’s EFI is very well laid out and easy to use, definitely one of the better systems I’ve used. There are plenty of options available, such as disabling devices, boot options, power management, fan control, secure boot, and fast boot. There is some minor overclocking available too with memory timings and GPU multiplier.  Our NUC overclocking and overpowering article is now live. On the next page, we discus our testing methods and benchmarks.

Page List
Top
1. The NUC5i5RYK, Introduction and Details
2. Testing, Benchmarks and Games
3. Living and Working with the System