Based on the MSI Wind, the Slice has a 10″ WSVGA (1024×600) LCD screen, is back-lit by LEDs, and a luxuriously large keyboard for a netbook; the Slice has many of the components other netbook users crave. Intel’s newer Atom processor, running at 1.6GHz, is used in the system to allow for a smaller form-factor, and better battery-life. Also featured are a 1.3 megapixel web cam, integrated microphone, card reader, and 3 USB 2.0 ports.

Upon arrival, I noticed a one truly unique trait about the packaging: there wasn’t any. The Slice went through shipment in its hipster-white faux-leather zippered case/wallet. The case, while it did protect it during shipment, was a nice personal touch from Smooth Creations, with their logo front and center, and the “SLICE” in the lower-right corner of the front. The case gives the Slice a more “custom” feel, without the boring old cardboard-box routine.

Inside, the case is less than spacious, since the netbook doesn’t really need it. However, if you were to stuff the power adapter into the case, it would create quite an obvious lump in the profile. Also, the case lacks a handle, for convenient carrying. I can’t say I was impressed here, but the case does its job: protecting the paint. 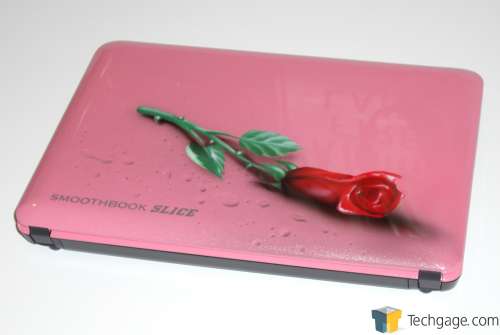 The Slice is supposedly “custom airbrushed.” It may look custom, but I highly doubt it was done by a professional. The rose/tulip/asparagus/mint mutant on the lid definitely looks unlike any flower I’ve ever seen. The petals say tulip, the stem says asparagus, the leaves scream spearmint, and the thorns whisper rose. It may not appeal to people obsessed with details.

Though, I have to say, the rest of the paint, in its glittery Pepto-Bismol pinkness, is actually quite nice, and very smooth. The glitter is not overdone, and is tasteful. This is most definitely not a manly-man’s notebook, though Smooth Creations has made more masculine paint jobs available. The water droplet effects are actually pretty cool… it’s just the flower that bothers me. Also, in the lower left corner is another branding, which reads “SMOOTHBOOK SLICE,” in silver.

Without a doubt, the lid would be way cooler without the flower, and in my case, a more masculine color. The lower-left corner silver branding would look fantastic on a glossy glittery-black paint. When I finally finished observing the exterior, I discovered opening the Slice was effortless, and smooth, due to its latchless design. The only issue with this is that the notebook does not close as securely as a latched design would. Even with a latchless design, my XPS m1210 has no issue staying closed, since it has a certain “snap” shut. The Slice, however, tends to sort of flop open, like a slack-jawed neanderthal’s mouth.

Moving onto the interior, the black keyboard contrasts a bit with the glittery-pink paint. The paint covers the touchpad as well, but the touchpad is still fully functional, and the paint actually enhanced my comfort in its use, letting my finger easily glide over its surface. Also, since the paint is conformal over the touchpad, it eliminates any true crevices in which dirt could get stuck in. 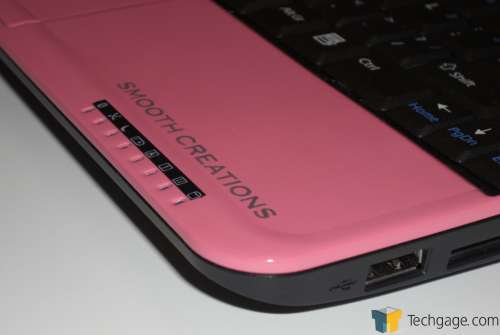 Next, take a look at the touchpad buttons, err… button. A partial holler at the MacBook, perhaps? It’s the same sort of system, you press the left side, you get a left click; you press the right, you get a right click. Unlike the MacBook, however, the touchpad is quite small. It really could have been wider, just by a smidgen. I actually found the unibutton to be a bit confusing, as did my friends who tried the netbook.