In the lower-right corner, you’ll see a familiar bit of silver text: “SMOOTH CREATIONS.” This is seen just above a series of LEDs, which actually tell you a lot more than most other notebook’s status indicators. From left to right: Bluetooth, WiFi, Sleep Mode, Battery, Caps Lock, Num Lock, Scroll Lock, and Hard Drive activity. I appreciate having all the status indicators in one place, but one question: where is the Power indicator? On the power button, of course. This might not seem like a big deal to most, but I find that it makes more sense than to have it anywhere else. This time, it’s in the upper-right corner of the netbook, just above the keyboard.

The keyboard is actually one of the better ones I’ve experienced on a netbook. It’s very comfortable for touch-typers, since everything is in a similar location as a regular notebook’s keyboard. Also, in a very Thinkpad-like fashion, the Fn button is where the Ctrl key should be. It’s the only peeve I’ve got about the keyboard.

The screen, with the regular anti-glare coating, is proportional to the keyboard, and fits very well in the chassis. The frame around it is adequate, but doesn’t make the screen seem smaller. As you look toward the top of the frame, you see a web cam. Unfortunately, the web cam probably doesn’t see you, since by default it is turned off. It’s easily turned on, but even so, it has a mild case of cataracts. The image is a bit grainy, choppy, and has a slight waviness to it, due to the warped plastic that protects the web cam’s own lens. The microphone is to the far right, in the corner of the frame. The camera activity light, instead of a soothing blue, or standard green, is an unappealing yellow.

The left edge of the Slice has two USB 2.0 ports, as well as the CPU vent, and the power jack. With the jack being on the side of the netbook, I expected a right-angled power adapter plug to match. This was not the case, and the plug was straight, which isn’t very convenient if you want the cable to be out of sight, or use a mouse if you are left handed. The other edge houses the last USB 2.0 port, card reader, microphone and headset inputs, VGA port, and Ethernet. 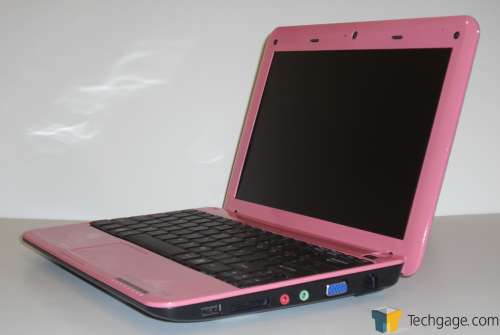 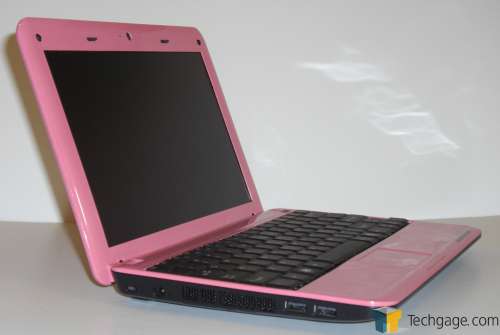 Unsurprisingly, there is no optical drive, which is actually a blessing for an on-the-go user. Optical drives are bulky energy-suckers, and have no place in a system that’s supposed to be portable and have a long battery life. Speaking of the battery, although difficult to remove, it’s 3-cell, 11.1v 2200mAh rating gives you about two hours of run time. This is a little bit on the low side, especially compared to the ASUS Eee PC 1000H’s nearly 7 hour battery time.

Although there is a larger 6 cell available, and rumors about an even larger 9 cell battery, the one provided does little to impress. The power adapter is unremarkable, and only different in its size. The “brick” is pretty small, compared to other laptop power adapters I’ve used. It’s approximately one-third the size of a regular adapter. The “brick” lacks a power indicator, though, which, if present, would really help in troubleshooting power issues.