Turning the Slice on for the first time, you get to see more branding on the screen that covers the POST. Afterwards, the BIOS entry options are shown, and then Windows XP begins to boot. I was surprised to see that Windows XP was already set up and waiting for me! This might be great for novice users, but at the same time, it doesn’t allow you to customize the things you would during a normal setup.

Next, the default user is “Smooth,” which, in my opinion, is really starting to cross the line. There’s a lot of branding all over the notebook, but I feel like the user name is one place that should be left to the user’s discretion. It’s relatively easy to change the username, but novice users may have trouble. For example, if your grandmother bought this laptop, would you really want her username to be “Smooth?”

Also, there was quite a bit of “stuff” left on the desktop. Lots of systematically named image files, setup files for 3D Asteroids and other applications, in addition to a populated Recycle Bin. Unfortunately, things a little more important than 3D Asteroids, like a competent anti-virus application, were not installed.

For a netbook, being on the Internet without virus protection could lead to some uncomfortable situations. Updates were also lacking, and upon the first few hours of usage nearly 16 Windows updates were needed. In addition, the XP color scheme that was left was a little less than appealing, with a very light shade of greenish-brown. Now, I’m no color expert, but the khaki-XP does very little to flatter the pink paint job.

While using the Slice, I found that a wireless signal was never quite completely connected. Although it was connected in some way, and I was able to surf the Internet, the Windows XP wireless configuration interface was always “Acquiring Network Address.” Also, the range on the wireless card was very disappointing. Places where I usually have an “Excellent” wireless signal were “Good” on the Slice. It almost feels as if the Slice needs a larger antenna, routed through the case. 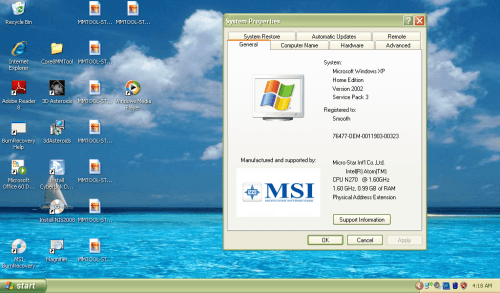 In addition, the wireless card provided was 802.11b/g, not n. If an n card had been used, the range would have most definitely been better, not to mention the data rate. Since the Slice lacks a PCMCIA or ExpressCard slot, adding an 802.11n network adapter without opening the laptop would have to be via USB. While speaking of opening the case, the warranty sticker was already pierced on the unit I had. This worries me, especially if I have to send the Slice in for service, and my warranty is voided. This could have been due to it being a review sample, however, and might not be representative of a retail unit.

The Intel Atom makes most applications pretty zippy, especially at only 1.6GHz. I was expecting a much slower experience, because of the relatively low frequency, and lack of two cores. The system has one gigabyte of RAM, and is actually more than enough. System performance gave me no trouble whatsoever. However, when looking at the system properties, it should be noted that the system is “Manufactured and supported by: Microstar International,” with a lovely MSI logo. 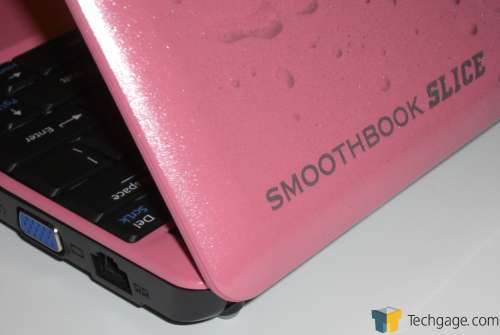 Back to the system’s performance. Even though the 120GB hard drive runs at 5400 RPM, booting into Windows XP was actually very quick, as was waking the netbook from sleep mode, and besides the network and web cam issues I’d mentioned earlier, the Slice does everything that’s needed by the user, and does it pretty well.

Overall, the Slice is a good product, for the correct user. I have a few moral issues, however, with the product. Smooth Creations did not manufacture this product, but do have their branding everywhere, but insinuate that they expect Microstar International to support their product. Also, the Microstar International product costs about $400, when properly researched, while the Smoothbook Slice costs $549.

The paint job most definitely does not justify the nearly $150 markup. In the end, this review is really about the MSI Wind. The MSI Wind works well, with a few issues. The Smoothbook Slice is a designer product, and changes the exterior to appeal to the consumer. If this is what the consumer wants, it’s a great selling-point. For those concerned with performance, the paint is unnecessary, and the markup is a waste of time. The latter individuals should purchase the MSI Wind.

Eventually, it all comes down to the paint: is it worth $149? For some it may be, for others not. The Smooth Creations Smoothbook Slice is definitely a luxury computer, like most of the computer products Smooth Creations sells. Owning the Slice is making a statement, like owning a Hummer. While you don’t need the unique appearance, you can pay for it, and you aren’t afraid to. With many different paint jobs, customized to the user’s personality, the Slice is more than the MSI Wind in that it shows who you are. For those who can do that without spending an extra $149, the MSI Wind is more down your alleyway.