It’s been far too long since the world has seen the release of a top-rate Sonic game – so is it going to be Sonic Generations that finally delivers the classic Sonic gameplay and charm that fans are looking for? With its vibrant world, fast-paced gameplay, many secrets to find and a collection of throw-backs to past Sonic games – it just might be.

Like so many other games today, Sonic Generations isn’t an especially lengthy game – about six hours overall start to finish. That six hours could easily turn into 20 or more, however, due to its design that begs you to replay levels over and over.

First, there’s the simple time attack. Sonic games have always catered to those who like to find the quickest way through a level, and Generations is no different. Even after ten runs through a given level, you’re bound to spot paths you managed to overlook – not especially difficult given Sonic’s super speed.

With online scoreboards for run-throughs, this game stands to be a competitive one for some time. Not into speed runs? Then you might be more interested in searching through each level for red rings that unlock artwork, audio tracks and other in-game collector items. Both classic and modern Sonic have 5 of these to find in their respective levels, and coupled with super speed and the many different path choices, finding all of them will not be easy. 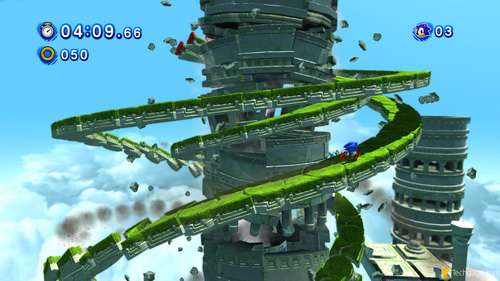 In addition to the levels themselves, there are also a few boss battles to tackle. None of these are particularly difficult, or complicated to figure out, but they’re fun nonetheless. The game is split into three sections, and after the three levels in one segment are cleared, many different level challenges will appear around the area that you can clear through – three in total are required in order to gain a key to unlock the boss.

Most of the challenges consist of reaching the end of the level within the time limit, with many different factors either helping or impeding your progress. Some challenges may see you bringing in the help of a friend, while others will simply require you to avoid anything that is going to slow you down. Some of these are much more challenging than the others, and while completing all of them isn’t required, each completed one will unlock a special collectable. 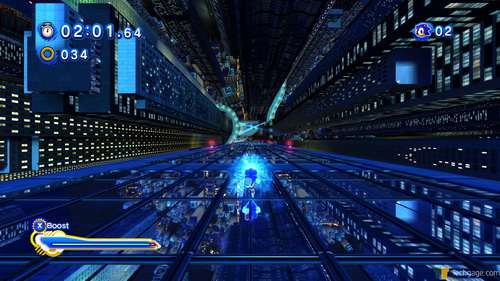 For those not familiar with Sonic, but are intrigued by the game, getting used to Sonic’s speed could be a challenge. Even for
veterans it can be, because as you are trying to avoid any obstacles in your way, you’re bound to miss many secrets or cool parts in the environment. Interestingly enough, it was only when I watched our gameplay video (found on the first page) that I truly had a chance to appreciate the art in some of the levels.

On a similar note, the graphics in Generations is just what we’d expect from a Sonic game. It’s vibrant, rich with more colors than you knew existed and is overall a visual treat. It doesn’t have the fidelity of, say, a Battlefield 3, but it’s not supposed to, and it shouldn’t. The levels are fun, colorful and very interesting. My non-Sonic fan brother even felt compelled enough to sit down to watch me play for an hour as he was hooked on seeing more of the wonderful-looking world. 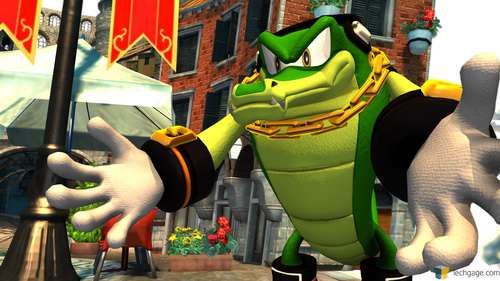 I have been a fan of Sonic games for as long as I can remember. Sonic was the reason I saved up with the help of a paper route to get the Genesis – and let me tell you, Sonic 1, 2, 3 and of course Sonic & Knuckles were certainly worth the cost of admission. My love for Sonic only grew stronger with Sonic Adventure in 1999. But after Sega pulled the plug on the Dreamcast, things began to go downhill. Rapidly.

I’m happy to say that Sonic Generations totally lives up to the hype I built up within myself for the game, and it finally feels like Sega “gets it”. We need more Sonic games like this one, because they’re a ton of fun, and pretty much define what a platformer game should be.

The following page has additional screenshots from the game for those interested, and we highly recommend checking out our gameplay video on the front page of this review as it can show you the game far better than still images can.