When Sony’s PS4 Pro was known as “Neo”, I had no idea that I’d feel so compelled to write about it after its official unveiling.

While Techgage primarily focuses on mobile and PC hardware, I’ve been an avid PS fan ever since the launch of the original console.

Despite that, I didn’t end up buying a PS4 until last December, but since then, I’ve put more hours into it than I’d like to admit. That being the case, it wasn’t hard to decide to pursue the upgrade.

However, just because that’s the case, there is a lot about the PS4 Pro that I don’t like. I ranted about the pros and cons after the announcement, and just last week, I detailed the differences between 1080p and 4K, 30 and 60 FPS, and which features which launch titles would support (to the best of my knowledge). 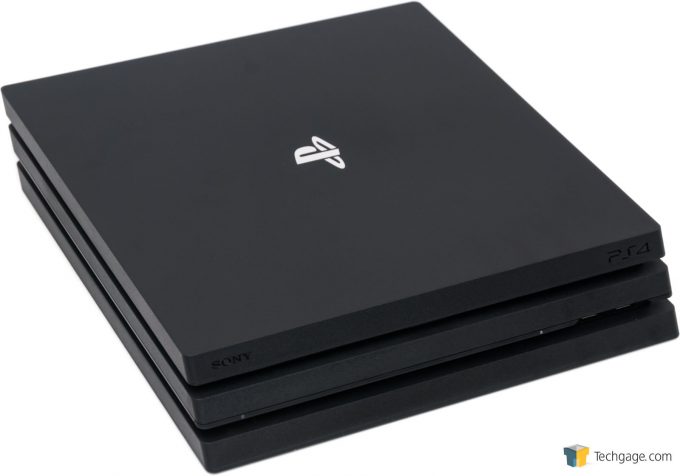 Now it’s time to take a real unit for a spin and see if those complaints remain when all is said and done. But first, there are a few things that should be made clear from the get-go: PS4 Pro does not replace the PS4, and all games optimized for it will still be playable on a regular model.

Beyond that, the Pro isn’t a revolutionary upgrade, but rather an evolutionary one – its upgrades might not even affect you. Who should consider upgrading are those who want to live on the bleeding-edge and don’t mind that the vast majority of the PS4 library doesn’t support the faster hardware, at least right now.

So, without further ado, let’s take a look at the Pro’s tech specs in comparison to the Slim, and then continue on with a hardware tour.

The PS4 Pro isn’t a major upgrade to the PS4 platform, which for compatibility’s sake is a good thing. To make that super-clear: the same exact firmware update file will work on either the PS4 or PS4 Pro. The operating system is also the same. When navigating the OS on a PS4 Pro, there’s almost no way to tell that the unit you’re using is a Pro; there’s no special branding anywhere. The Pro is still a PS4, through and through.

That might make the system seem lackluster, but it won’t be when games take advantage of the beefier hardware. And, while it’d be amazing if all current PS4 games would enjoy a free bump in detail, that’s not going to happen.

In order for a game to support the Pro, developers need to optimize the game as they see fit and then release a new patch. Like the firmware, these patches would be delivered to all PS4 units, which means owners of original PS4s might get updates that are irrelevant to them – at least for now. All future titles that support PS4 Pro will do so out-of-the-box (or cloud).

On the performance front, the PS4 Pro’s CPU is 31% more powerful, and the GPU, 227% more powerful. The memory subsystem has enjoyed a slight overhaul, as well, with 1GB of RAM now dedicated to the OS, and the overall bandwidth increased 24%. All-around, the Pro is a sweet upgrade over the original unit.

I should note that this table includes the PS4 Slim, and not the true original. That’s important to note because the Slim features some of the same upgrades that the Pro does, including USB 3.1 ports, ac wireless, and Bluetooth 4.0.

By contrast, the original PS4 had Bluetooth 2.1, n wireless, and 3.0 USB. It’s important to note also that while the Pro has a 1TB hard drive, it’s still mechanical storage, so load times shouldn’t improve much, if at all, despite the move to a modern SATA 3.0 bus.

At the moment, there is only so much I can comment on performance-wise, as I haven’t been able to spend a lot of time benchmarking. I am going to follow this article up with a look at performance between the two units, both with the original hard drives and after-market solid-state drives installed – so stay tuned.

A Tour Of The PS4 Pro

With the tech specs covered, it’s time to take a tour of the actual hardware. As seen below, the PS4 Pro packaging is standard fare; straight-up boring, in my opinion. A free game can be scored with ease if you’re to purchase a Slim unit, but the same can’t be said here. This makes me believe that this is targeted more at people wanting to upgrade, rather than at those who don’t own a PS4 at all.

Alongside the PS4 Pro in the box is the DualShock 4 controller, an HDMI cable, a micro-USB-to-USB cable, and earbuds for voice chat. As seen in the last shot in the slider above, the DS4 controller included with the Pro is identical to the one included with the regular console – except for the fact that the buttons are a different shade of gray (which is really hard to notice without it being pointed out).

Like the original PS4, this Pro is slanted in the front and back, and has three “tiers”, if you want to call it that, versus the two we saw on the original. I am not a fan of this design, but fortunately, it’s not what’s on the outside that matters in this case.

Whereas the original PS4 had touch buttons, and the pre-Slim model had hard buttons, the Pro has power and eject buttons that are almost invisible: they’re located right under the second tier (or lip). Also at the front are dual USB ports.

At the back, more connectivity can be found: power, HDMI, AUX, optical out, USB, and LAN. At the absolute right side of the back is a little slot cover that can be removed (the left side just needs to be pushed in towards the right slightly) to remove and replace the hard drive (with another, or an SSD).

Because comparisons are fun, here’s the original (well, first iteration) PS4 and the new PS4 Pro, stacked. The PS4 Pro is a wee bit wider and taller, and about 50% heavier. Because the Pro is spec’d with a much higher power draw, the power port has changed to one that most desktop computers use.

There is not too much else to say about the hardware, except for the fact that if you wish to stand yours up, you’ll need to purchase a stand separately. It will secure to the right side of the console via a hole most people will never even notice.