For me, the most familiar aspect of the SMP-N100 was the interface. Reusing the XMB of other Sony devices, most notably the PlayStation 3, the XMB (short for the absurdly spelled XrossMediaBar) should feel right at home for any PS3 or Bravia owner. Providing an organized layout of all the options, the XMB moves both laterally and vertically, grouping sets or options together.

Laid out like the other XMB devices, we start with setup on the far left. From here we can control everything about the SMP-N100. Here is where we will check for updates, downloadable from Sony. We can also setup the sound, screen and security settings. 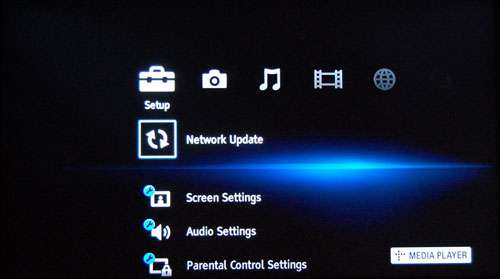 While pictures and music can be streamed, I spent the majority of our testing moving through the various video options offered by the SMP-N100. Starting with its UPnP capabilities, it quickly picked up my Synology NAS box and the other NAS box I have on my home network that’s clearly TwonkyMedia enabled. From there, you can drill down into your device and browse the shared file structure of whatever your source device might be using. 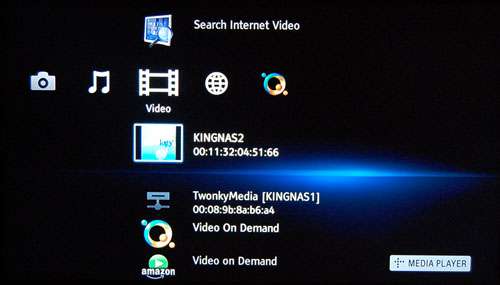 Sony also provides its own content alongside third party channels such as Wired, YouTube, Amazon Video on Demand and Netflix. Others include, curiously enough, a Michael Jackson channel and other topics of interest such as travel and food based channels.

As a subscriber of Wired, I was excited to poke around the channel. Once in however, I was disappointed. While the content was enjoyable, it was out-of-date, with one of the most recent videos being the deconstruction of Sprint HTC Evo, a phone that’s been out for quite some time. Many of the provided channels allow free access but there are a few that are account based. Netflix, Hulu and Amazon VoD all require an account to access their content. 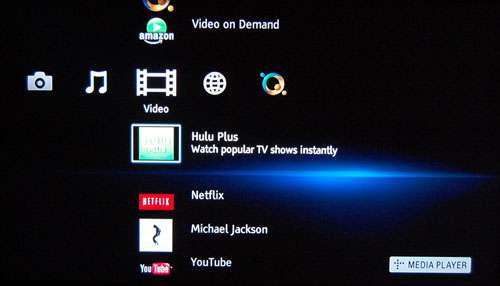 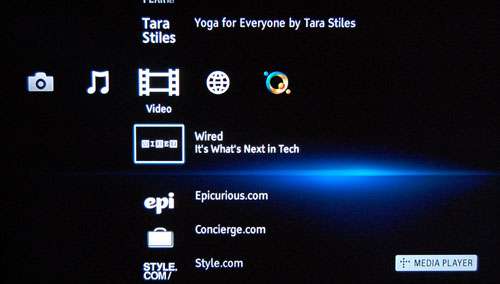 When you move into the account based services, you quickly notice that Sony has decided to go its own way with the interface. Both Hulu and Netflix use a custom look and while the look is carried over from one channel to the other, providing the user with the same feel, the images are small and the overall feel is rather underwhelming. The custom interface can certainly get the job done but after using Hulu and Netflix on both the Roku and the PS3, the SMP-N100 feels very uninspired. Seriously, the PS3 is a Sony device and uses a good interface – why can’t the SMP-N100? Kind of lame, really. 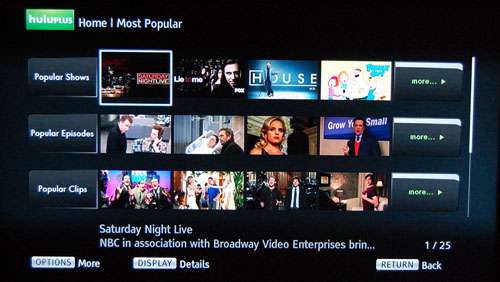 Performance of the SMP-N100 was solid. We didn’t run into any major issue when streaming, be it from another network location or locally through an attached USB drive. Depending on the method of pulling content however, the player determines what you can and cannot watch.

As an example, the .mkv video container is a very popular format. If you are reading this review, it’s safe to assume that you are doing so for the streaming capabilities of the SMP-N100. If you want to watch your Matroska video files, you can only do so when reading from an attached USB hard drive. This is the same for AAC (M4A), AVC-HD, DivX (JPG and JPEG), MPEG-1 VOB, VRO, MPG, MPEG, m2ts, MTS), Simple MPEG (MKV, MP4, M4V, m2ts, MTS) and WMV. Conversely, you can play the above mentioned and MP3, WAV, JPG, JPEG, XviD, VOB, VRO, MPG, MPEG, m2ts, MTS and WMA from a DLNA supported device as long as the SMP-N100 is on the same network as the host.

Playback was smooth on the videos we tested. For steaming media, we conducted everything wirelessly. To start out with, we fired up Hulu. It should be stated that Hulu does not provide 1080p content. However, on the highest setting allowed, the picture still looks great and the SMP-N100 handled the task without hiccup. The 802.11n wireless that the SMP-N100 sports was more than up to the task and providing you have enough bandwidth coming into your home to allow HD streaming, the Sony SMP-N100 will not be your performance bottleneck.

With Internet-based content tested, next came the personal media. For this I took a Religulous .mkv file that I had and converted it to .avi. From there I dropped it into the appropriate directory on the Synology device and began to stream. Again, the performance was flawless. The picture never offered to stutter and the experience remained smooth from beginning to end. Watching the same video in its native .mkv format via USB produced the same results. 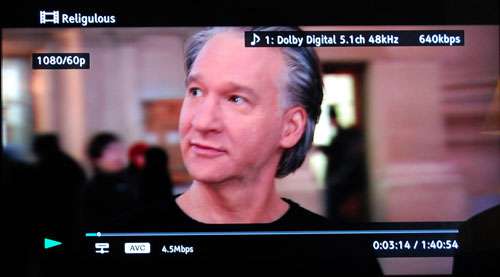 On to a look at the extras!