When overclocking is concerned, I can say I was honestly impressed with this card. As pointed out in the introduction, a stock 8500GT card has frequencies of 450MHz on the Core and 400MHz on the memory. This Calibre card ups that to 650MHz and 720MHz, respectively. That, in itself, is impressive. However, after a little bit of playing around, I found 735MHz/750MHz to be the max stable overclock that this card could handle.

Compared to a stock 8500GT, this card hit almost +300MHz on the Core and +350MHz on the memory. That’s pretty exciting for any graphics card.

That said, this is the first Sparkle card we’ve reviewed, and so far we are impressed. Will it be the last? It’s hard to say, since at this point in time it’s difficult to find their cards for sales in NA. They are working towards getting their products listed at our popular e-tailers, but the process can’t happen quickly enough, it seems. Considering the fact that we have a lot of European visitors however, this review applies to you. 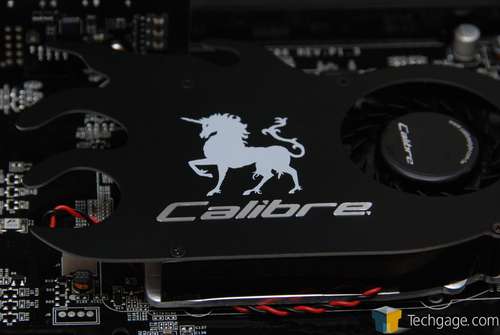 After looking through a couple UK-based e-tailers, I found the price for the card to sit at approximately £45 (~$93USD). At that point, it’s about $13USD higher than the rest of the competition over here. In lieu of that fact, I am going to award the card an eight out of ten, for a few different reasons. First, this card is the highest stock-clocked 8500GT on the market. Second, it’s overclocking ability is top-rate. Lastly, the card itself looks fantastic. Sparkle knows who they are catering to with their Calibre series.

If you are in the market for a budget GPU and are unwilling to spend more than $100, then any 8500GT will serve you well. It doesn’t offer advanced performance, but most games ran nicely at 1280×1024. To go higher, however, I’d recommend at least an 8600GTS.