Spinning Some Tunes with the Revamped Grooveshark

by Rob Williams on November 13, 2012 in Audio & Media, Editorials & Interviews

With promises of free, convenient music listening, and not to mention a massive catalog, I couldn’t help but give Grooveshark a test when its overhaul was rolled-out earlier this month. In a world where music-streaming services seem to be a dime a dozen, does Grooveshark do enough to stand out? Let’s find out.

When I received an e-mail from Grooveshark last month regarding an upcoming update, I did something I don’t often do: I decided to check it out. The reason I normally don’t boils down to being a Canadian – yes, living in the Great White North can at times be a little frustrating when it comes to online services. Up here, we can’t use Hulu, Spotify or Pandora. “Sign up to be the first in line when (example service) never launches in your country!”.

Thanks to the fact that my options are rather slim, and also the fact that it’s a great service, I’ve relied on Last.fm (my profile) for most of my online music needs lately. A downside, though, is that I can’t simply pick an album and listen to it. Instead, I pick an artist or genre and then listen to the randomly-chosen music that the system decides to give me. While this has helped me discover new artists, it’s useless when I’m wanting to listen through a specific album.

Given the fact that this article exists, you’ve probably already surmised that Grooveshark remedies both of the aforementioned issues. As finding a list of supported countries is just about impossible (at least within the time-limit I’m willing to dedicate to it), you can simply head on over to the website and see if it works for you.

To simply listen to music, Grooveshark doesn’t require you to sign up for an account (a great perk if there ever was one). Signing up will net you things such as a profile, the ability to like and dislike tracks, tie the account to other services (Last.fm, Facebook, et cetera), store playlists and so forth. A $5/mo subscription will remove all ads from the website (of which are few to begin with), allow you to upload and share your own music, tweak additional customization options, store music for offline use along with a couple of other perks. 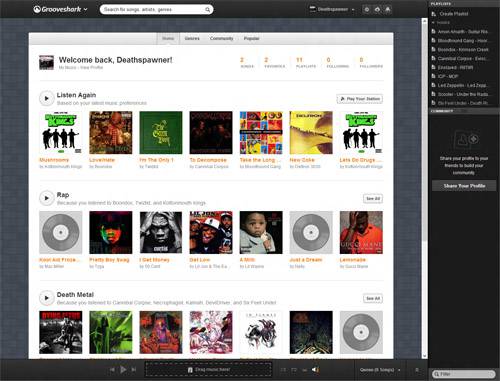 Above all else, Grooveshark’s goal is to deliver the best and most accessible music collection on the planet – and it shows. It’s not an information-heavy website like Last.fm is, so you won’t come here for band info (bio, tour, photos). What you do  come here for is to listen to your favorite music, discover more and engage in simple community activities.

The first time I sat down to use Grooveshark, I quickly found myself blown away. First, there was the ease. I click play on a song and it begins playing instantly. Second, there was the sheer selection. After sharing the website with a couple of friends, we actually had a hard time finding a track not on the service. After all of the searching I did, there are only a couple of obscure artists that can’t be found.

I think this point needs more emphasizing. After I began using the service, I told my brother about it, as he’s often on the lookout for obscure artists and special edits of certain tracks that are seemingly impossible to locate. When I recommended he check out the site, he gave me a begrudging “yeah, maybe”. About 10 minutes later, he followed up: “You’re my hero.”

One of the reasons that Grooveshark’s selection is so epic ties into the legalities surrounding the company. Users are free to upload whatever music they choose, which then becomes visible from the search engines. This could mean that music uploaded to the service might not be sourced from the record label itself, but rather a regular user. This is something that’s outside of Grooveshark’s immediate control. Anyone who uploads music has to agree that they have the right to, making the procedure no different than uploading a song to YouTube.  Grooveshark is currently embroiled in lawsuits from much of the music industry, though the company remains adamant that its business is completely legal.

As a result of the ongoing lawsuits, Google, Apple and Facebook pulled Grooveshark’s app from their respective stores, meaning that getting a hold of them is made a little more complicated. You can head on over to the mobile app site to download an installer manually for your respective phone. iOS users must have a jailbroken phone in order to install the app.

In lieu of using one of these apps, Grooveshark also offers an HTML 5 site that allows anyone to use the service without having to jump through hoops. However, whether or not it will work ideally for you depends on a few factors, the main one being that you’ll need to use the first-party Web browser that ships with your phone. Further, the browser needs to remain active for playback. 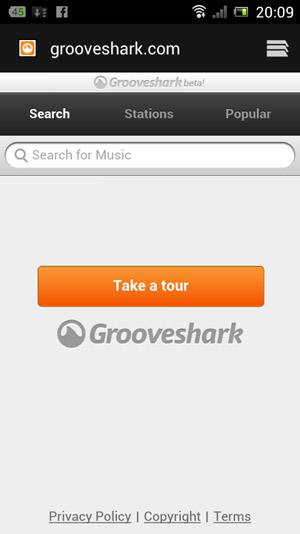 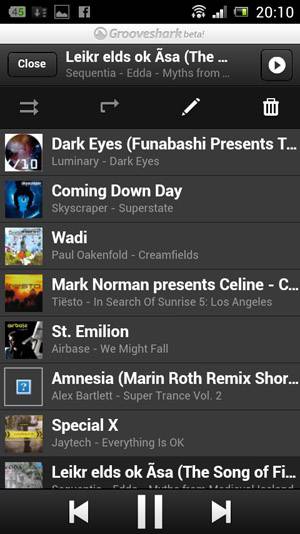 On an Android 4.1 tablet, the HTML 5 player was too unreliable to be used for too long. While I could get music to play, the pause and volume buttons didn’t do anything. On an Android 4.0 phone, the situation was very different. There, things were perfect, and overall, the app is quite nice. A rather significant downside, however, is that you cannot log into your account with this app, so playlists will not be available.

Because of the caveats that the HTML 5 player brings, I couldn’t imagine not just using the mobile app that Grooveshark provides. While it’s not a major focus of the company with the HTML 5 player still being in beta testing, it’s proven extremely reliable for me. Here’s the main screen: 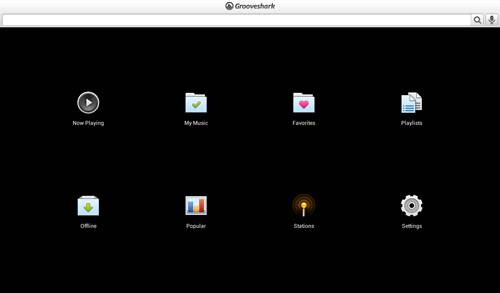 Some features won’t be available unless you have a paid subscription. You can head up the Stations section if you just want to choose a top-level genre, or use the search bar up top to find a specific artist. If you’ve made any music available offline, it’ll appear in that option here.

Below, you can see how a search comes up and also what the player itself looks like. For the sake of ease, I took these screenshots on my tablet. The orientation would obviously be different on your phone. 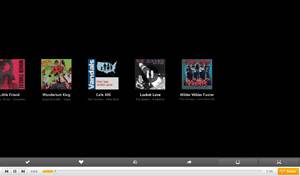 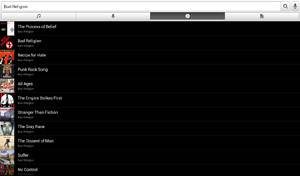 In the app and on the website, you’re able to “love” a track so that it can be easily referenced later (or if you want to share the list), while you’re also able to smile or frown a song to help the system understand what it should play you next. That leads me to another thing I like about Grooveshark: the accuracy of its radio.

At Last.fm, I began to find that the radio just wasn’t as appealling to me as it was at first. I ended up hearing the same songs over often, and a lot of songs would come up that were plain garbage. At Grooveshark, I do have the same song play on occasion (once, seven songs apart), but the songs that play are way more to my tastes than what Last.fm has always chosen for me. Grooveshark just has a knack of choosing good songs.

Grooveshark has proven something to me: I can get off my high horse and set aside my FLAC collection and just listen to music conveniently online. Since joining the service, I’ve found myself going to the site to listen to music before I open up my usual audio player. The songs being streamed range from 256~512Kbit/s, so the quality is quite high, and across the 500+ songs I’ve streamed so far, I haven’t encountered any that had a quality problem. In fact, sometimes I’d forget I was actually streaming an album and not listening to my lossless version. I’m no audiophile, but with a good pair of cans and a higher-end audio card, I can sure as heck tell when the bitrate is suffering.

As you can likely tell, I’m pretty excited about having an option like Grooveshark available to me, when almost no “cool” services are. But there are a couple of things that I feel Grooveshark could fix, to make the experience just a bit better. Finding specific information on something can really prove to be an exercise of patience. Finding out exactly what a paid subscription gives you, for example, left me confused. Everything I was being told I couldn’t do without a paid subscription, I could (such as being able to stream with the mobile app).

Over the course of the past couple of weeks, I found myself having to go to Google way too often in order to find something on Grooveshark’s own site. A perfect example is when I tried to find the downloads for the mobile apps. While I understand Grooveshark prefers to push its HTML 5 player, its downsides prevent me from wanting to use it. In searching the site for the apps, I landed on a massive page explaining the options – without a single download link to be found! Instead, that’s where Google came to the rescue.

Fortunately, these issues don’t devalue the service much, as the fact of me now being a Grooveshark addict (my profile) can verify. Record companies may be hassling the company, but there’s something to be said about the sheer level of convenience here. Grooveshark already works with “thousands” of labels and artists, so it’d be nice to see if the “Big Four” would get on board as well and help make the service even better.