Summertime. We can’t get enough of it, but our computers absolutely hate it. So, we have another Spire cooler on the test bench, and this one looks promising. However, though it did a good job at what it was sent out to do, the installation hassle really holds back from this being a favorable cooler.

Before we get into the guts of the review, let’s review my test PC. The specs are as follows:

It’s not a bleeding edge PC by any stretch of the imagination but it serves me well. This is the same. I will record temperatures of the CPU using the ever popular ITE SmartGuardian monitoring program. Idle temps will be recorded under normal usage such as internet browsing or just sitting. Load temps will be recorded while running CPU burn in as well as running a 32 million Pi calculation. This should sufficiently keep the CPU at 100% for some time and this will give us a good example of how the VertiCool II will perform under serious gaming or whatever you do with your PC.
On with the results’

As you can see here, the VertiCool II hangs with the big name coolers and then some. The idle temps were a bit higher than the other coolers but still in an acceptable range. When we look at the load numbers, the Spire continues to hang with the big boys as well. While these are higher, one degree is almost nothing, they are wonderful numbers.

In conclusion, the VertiCool II is a capable cooler for an AMD system. My results were nice to see. There are some negatives to this cooler as well. Some are petty and one is a very big one. My problems with the mounting of the cooler on my motherboard were unforgivable. This cooler appears to have been made for Intel PCs and users using AMD PCs were an afterthought. The fact that I had to physically cut the bottom of the cooler’s fan guard is something that no one should have to do when they purchase a cooler. 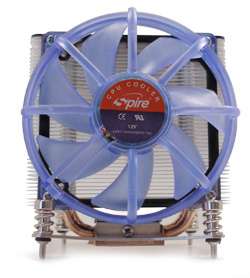 After all is said and done, this cooler is a good cooler. The problems I had with the install of this cooler can be forgiven if Spire takes the time to redesign the fan guard so an AMD user can easily install this cooler. As it stands now though I cannot recommend this cooler to anyone using an AMD cooler. The hassle to either physically alter the fan guard or remove the fan all together is something that the end user should never have to do. With all this said, I am giving this cooler a 6 out of 10 on the Techgage labs scale. Please note though that this cooler is a good performer, but the design of it needs to be tweaked just a bit to make AMD user’s installation easier.

Thanks go out to Spire for allowing us to take a look at the VertiCool II cooler. Their support of the PC community and tech sites such as Techgage helps keep sites like us in the position we are in.

If you wish to discuss this review, feel free to jump into our related thread. You do not need to register in order to reply to our content threads.