It be a glorious day for many people around the world, and I’m not just talking about Christmas here. A game that many have been waiting for has finally arrived, from a galaxy far far away… Star Wars: The Old Republic. The game marks a pivotal moment for BioWare as its first MMORPG, so read on for our initial review.

Star Wars as a franchise should need little introduction; Jedi’s, Lightsabers and using the Force, be it for the Light or Dark side. BioWare should need little introduction, too, as it’s responsible for such epic stories and games as Mass Effect, Dragon Age and the original Star Wars: Knights of the Old Republic. So when BioWare and Lucas Arts team up again for another Star Wars game, the world takes notice. This time, things are a little different – The Old Republic is BioWare’s first foray into the world of Massively Mulltiplayer Online Role Playing Games. That’s right, Star Wars is back online!

The Old Republic’s events takes place centuries before the fall of the Sith Empire, so there’s no Darth Vader, Yoda or Obi-Wan to worry about here. Those who have played the original single-player games of KotOR will find the setting very familiar, as TOR is based some 300 years later (the bombing of Taris to find Bastila is a distant memory). War wages on between the Republic and the Imperials (Sith Empire); how you go about this war is entirely up to you.

Creating your first character will be a somewhat experimental affair, and it pays to read up on each one before you decide, although hints are given in-game as to how each class breaks down. While there are 8 classes in total (4 for each faction), each with 2 sub-classes, the game comes down to the big 3 roles, Tank, Healer and Damage; how you go about that role is up to each classes mechanics and specialities. Ultimately, this generalization of 3 roles is a little disappointing, especially coming from Rift and other MMOs where there was at least a dedicated support role (buffs and debuffs). 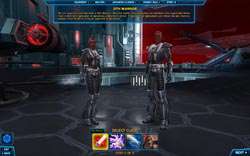 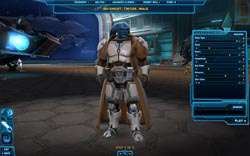 While creating your character, and before you even take control of him/her, there are a good 20 minutes of cinematics to sit through. The epic opening intro, the glorious faction intro, then the in-game cutscenes of story relating to your class. Story was first and foremost on BioWare’s mind, and it is a key strength of the game. For the number of races that are available in Star Wars, though, most don’t make it to the character creation screen, listing pretty much only humans – some just have extra appendages and/or face-paint.

Every character you talk to is voice acted (some 270 hours of voice-overs in total); all quests, from simple go to X and kill Y, are cutscenes with multiple choice answers. The world is engaging and for the first time in any MMO I’ve played, this is actually the first that takes the story to a fully engaging level, your character feels like a part of the universe, not just one of many. 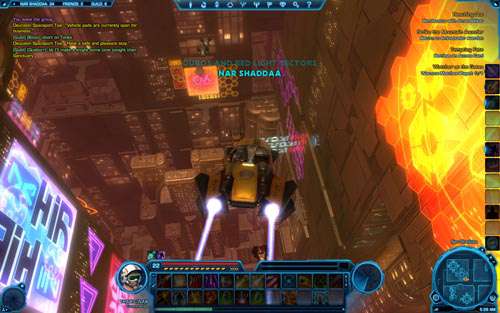 This onslaught of cutscenes and voice acting has and will drive some people insane, there are very few short conversations, although you can at least skip most dialogue. For those that enjoy story, and want to know why we’re killing everything in sight, this is a welcome change. If you just want to kill-loot-kill, then you will tire of this rather quickly. 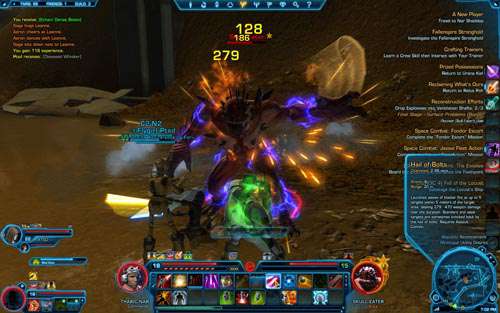 There is an up-side to the conversations though, especially when it comes to handing in quests, you are often presented with multiple choices, light and dark side actions. BioWare is not afraid to throw morally ambiguous situations at you too, deliberately putting you in a tough spot.

Some refugees have no credits, the older gentleman would normally go scavenge for powercells and sell them on to make money to feed his family. He is now injured and can not provide; he asks you for help. You go forth and collect the powercells and enter a station to recharge them, only to be stopped by one of the workers. He explains to you that if you continue, the workers family will be killed for his incompetence by allowing people to steal from that station. So, let the refugees starve and save the workers family, or recharge the power cells and let the worker’s family die… choices, choices.

The reality of the actions probably has little impact on the world, or even further down the story (except for certain class specific quests), but this is a great change from the normal hand-in and profit quests. There are even chances to squeeze a few more credits out of people, either through persuasion or threats. Treat people right, and they may even send you mail with complementary items and/or credits.

The ambiguity of these choices has even deeper routes as it’s possible to make a Light side Sith, or a Dark Jedi. You are still bound to your faction, but your disposition may be somewhat ‘against the grain’. 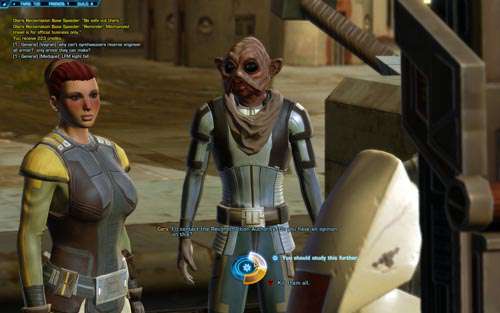 The involvement of the story, all the conversations, voice acting and so forth, can lead to a somewhat odd feeling. This feels like a single player game. Everything you do and who you talk to, it’s directed at you specifically. I even found myself looking for the save button before jumping into a conversation, wishing to experiment with dialogue options. When you team up with someone and play the game with them, doing the same quests and such, then it becomes different.

The game encourages social behavior with social points, earned by partaking in quest dialogues with other people. When you engage in a conversation with a party member, you are both given dialogue choices, sometimes the same, sometimes different. When you select an option, it rolls a random number, the highest score becomes the answer. If you both select the same answer, you get more points. You still get points if you select different answers too, and it even lets you see the result of actions you had no access to, like ‘Flirt’.

Yes, you read that correctly, it’s possible to flirt with NPCs, and even partake in romantic relationships with your companions (personal allies you pick up along the story), complete with ‘fade to black moments’. The usual BioWare stuff. 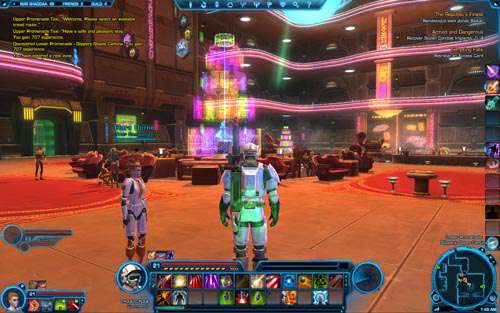 Speaking of companions, as you progress through the story, NPCs join you in your adventure, lending a helping hand in fights (as another damage, tank or healer). This kind of mechanic reenforces the single player feeling further, since you don’t always need another person to play with, your companion will do. But companions go deeper than that, they also provide access to the crafting system as well. Sending them off on missions to gather materials and such. The more you interact with them, the more effective they become in combat. While it’s possible to get them into a bad mood with you, I doubt it’s possible for them to leave your service, which seems odd.

Combat is a little more energetic than your standard MMO. You very rarely come across a single target pull, and if you do, it’s usually an Elite or Champion. This greater number of opponents does mean you have to think a little before jumping into combat; who to prioritize first, is there cover available for characters that can make use of it, any environmental objects a Jedi can throw at things, what’s the best way to group them up and Area-Effect them down. Fights can be over very quickly too, adding to the energy of the game as you keep on rolling to your destination. 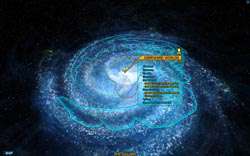 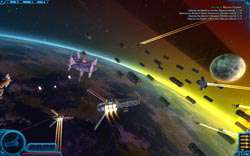 Later on, you will acquire a personal spaceship as your means of transportation and safe-haven for your companions. It’s also possible to get into dogfights in space, while it acts like you’re on a rollercoaster (you are constantly moving forward, with the only controls being minor movement, rolling and shooting), it’s still a very fun experience.