It be a glorious day for many people around the world, and I’m not just talking about Christmas here. A game that many have been waiting for has finally arrived, from a galaxy far far away… Star Wars: The Old Republic. The game marks a pivotal moment for BioWare as its first MMORPG, so read on for our initial review.

Problems arise with combat later as you are given more and more abilities to play with, each on different cooldowns, some reactive and such, and there are no macros in-game. In fact, SWTOR is very much against macros, even so much as spelling it out as a bannable offence in the EULA (ironic, given the number of macro-centric gaming peripherals out there, some specifically targeted towards SWTOR).

That results in your toolbars filling up with abilities, with no way of stacking them (placing cooldowns on your spam friendly keys). The thing is, there are more skills and objects to use than there are action-slots available, leading to a lot of clutter as you struggle to find the ability you want. However, macro support will supposedly come later, but how much later is anyone’s guess.

The other problem as well (although some may be fine with it) is the complete lack of user interface adjustment. Only a handful of elements can be moved around. But the action bars are fixed where they are, and you can add 1 more row to your bottom bar, and 1 column either side of the screen, not within easy reach. As a personal issue, the size of the health bar is incredibly small and thin compared to its importance. It’s also tied into the actionbar, adding yet more clutter with no way to move it. As it stands, it’s not very ‘glance’ friendly due to its size.

Other issues crop up as well, such as gear comparison. When you hover over an item, it will very clearly compare it to your currently equipped item, even listing the total point improvement it will provide, but when trying to compare a companions gear, it will still list your personal gear as the comparison.

While it is still early days, I’ve tried my hand at as many activities as possible. Flashpoints are the equivalent of dungeon instances in any other game, providing an opportunity to test your skills with friends on some of the more challenging experiences of the game, introducing mechanics and playing your role as a tank or healer. Heroic zones are areas in the main quest zones that provide more of a challenge than the usual riffraff running around and give the more casual players something challenging to fight (coming in 2 and 4 man flavors). Get enough people together to form an operation (20 man raid), then there are world bosses to take down for each leveling zone. 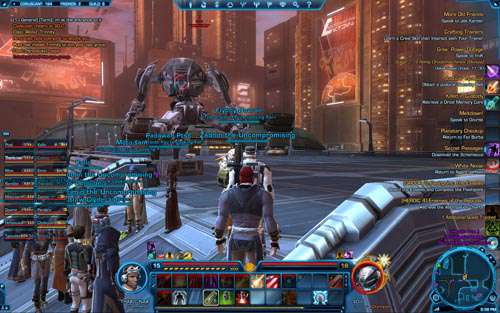 Speaking of large groups, there is a very interesting system in place on each server to alleviate the all too common overcrowding issue in leveling zones. SWTOR takes instancing to a new extreme. Each server can have multiple instances for each zone, allowing people to move between them to a less populated area.

All class story scenes are in their own instance, as well as story quest zones, preventing you from tripping up over someone else and waiting 10 minutes for a boss to respawn (although, waiting for respawns is still an issue for common quests). Every player has their own spaceship later too, which is another instance, space-fights are instanced too. Thousands of people on a given server, yet you will only see a handful running around at a given time.

Another major benefit is the fact the game is international, meaning people in Europe can play on the US servers, and vice versa, no region locking going on here (though keep an eye on ping times, from here in the UK to the US server, pings average between 140-180ms). 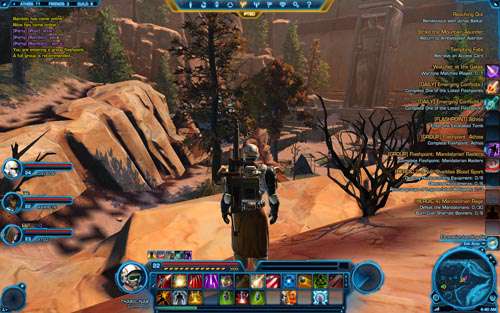 Graphically, SWTOR isn’t your usual AAA, super cinematic, ultra realistic monster. This is an MMO after all, and it needs to account for a large number of people on the screen, in different equipment, with lots of effects going off at the same time. As such, much of the game is subdued to make it as friendly as possible. This isn’t to say that it’s graphically poor, in fact, it’s extremely well done. The environments are beautifully varied and very well styled; a very dynamic game, especially in cities and clubs (holo-dancers on tables, neon signs and such).

One major consideration should be taken into account with this game; it takes up a whopping 20GB and comes on 3 DVD9s. Those with bandwidth or speed restrictions should seriously consider the retail version.

Ultimately, the $60 price for the game comes down to whether you think it’s worth it. Currently, there is no free trial (not surprising, given the size of the game), so it’s a little difficult to judge. Since this is still early days, I can’t give a definitive answer. But first impressions are extremely positive, it’s new, it’s exciting, and there’s a story to back everything up. When the endgame starts at level 50, we’ll see how it fares, since that will be where everyone ends up and when the real game begins. For now, I’ll try and break it down as best I can… 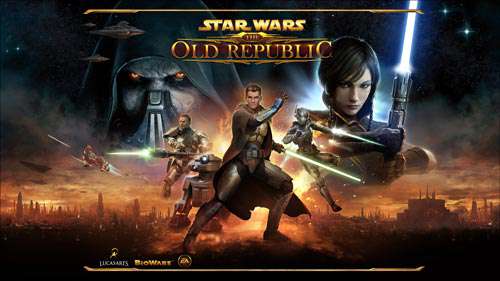 If you are a BioWare fan who has played and enjoyed the original Knights of the Old Republic, SWTOR is a fine addition despite being an MMO. If you are a Star Wars fan, then you have probably already bought the game and hit level 50. For sci-fi fans who are not majorly into Star Wars or don’t know much about the universe, you shouldn’t need to worry as it’s very easy to jump right in and immerse yourself in the story. For everyone else, it may be best to wait for a trial, as the up-front fee will be very off-putting.

I’ll be sticking with it for the next couple months and will provide additional feedback in the future. Feel free to ask questions in our forum and I will do my best to answer them, otherwise, you can head on over to the SWTOR forum and browse there for more information (just try avoid reading too many rants and trolls).