The way the gaming keyboard market has been lately, you’d almost have to guess that rubber-domed models simply no longer existed. In fact, we haven’t taken a look at a non-mechanical keyboard in over two-and-a-half years. Believe it or not though, non-mechs still exist, and as SteelSeries’ Apex proves, they can still be very good.

Of all of the editors on Techgage’s roster, I’m probably the last hold out when it comes to switching over to a mechanical keyboard. I’ve tested them before, and I can see why some people like to use them exclusively, but I just don’t see the need, personally.

Mechanical keyboards that have the features I want tend to be more expensive, but most of all they generate more noise when typing, which is no-no when there’s a sleeping family nearby. Sure, you can buy a set of rubber o-rings to dampen the shock when the key bottoms out, but that’s another $20 on top of what was already spent, and I’m a notorious cheapskate.

Fear not like-minded, quiet-loving misers! SteelSeries has you covered with the Apex gaming keyboard. It features the tried-and-true rubber dome technology, but doesn’t skimp on features, functionality, or build quality. Let’s have a look.

It might be hard to tell from the initial top-down view, but the Apex is quite large due to the extra keys and non-removable wrist rest. Something else that’s not immediately apparent are some of the under-the-hood features such as N-Key roll over (aka anti-ghosting), a 1000Hz polling rate, and the ability to set each of the different key zones on each of the layers to one of any 16.8 million colours.

What’s a layer? Think of it as a profile within a profile (Yo Dawg). The Apex has four layer buttons (L1-L4) that allow for on-the-fly switching between custom layouts. Below the layer keys are two rows of macro keys (MX1-MX10). Over on the W key are two small bumps that are designed to make it easier to return to the typical WASD home position if your hand happens to stray. 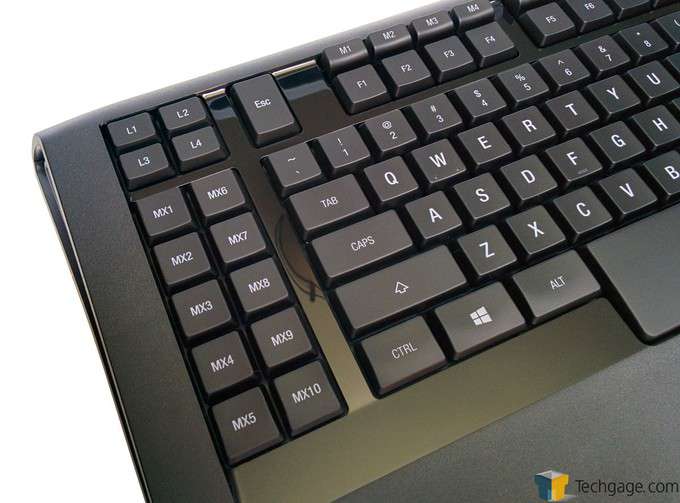 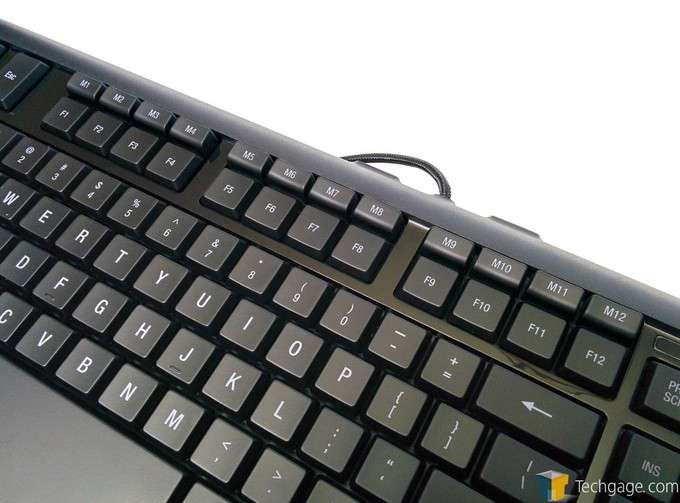 Things look a bit more standard on the right, but with the addition of two new arrow keys. SteelSeries has provided a diagonal left and diagonal right key to help with controlling your on-screen alter ego. Rounding out the available keys are the usual number pad, and a row of multimedia keys over on the far right. 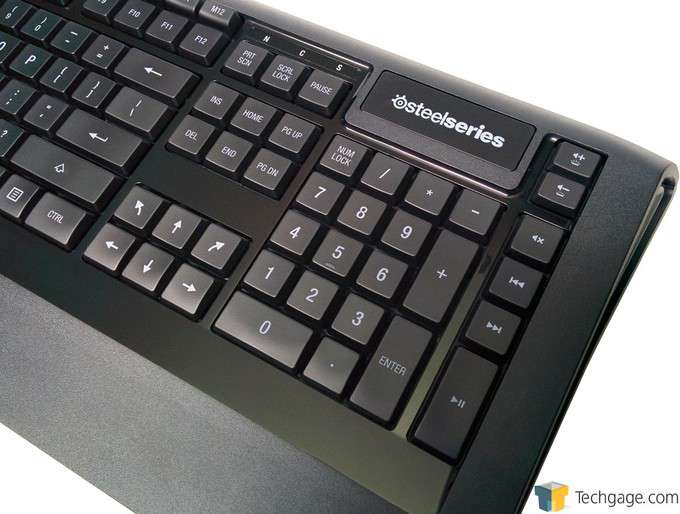 Both sides of the Apex sport a translucent plastic accent that runs towards the front and wraps around the corners. This provides a little bit of extra style, and, if you’re like me, doubles as a light to find the pen that you lost while writing a certain keyboard review in the dark. 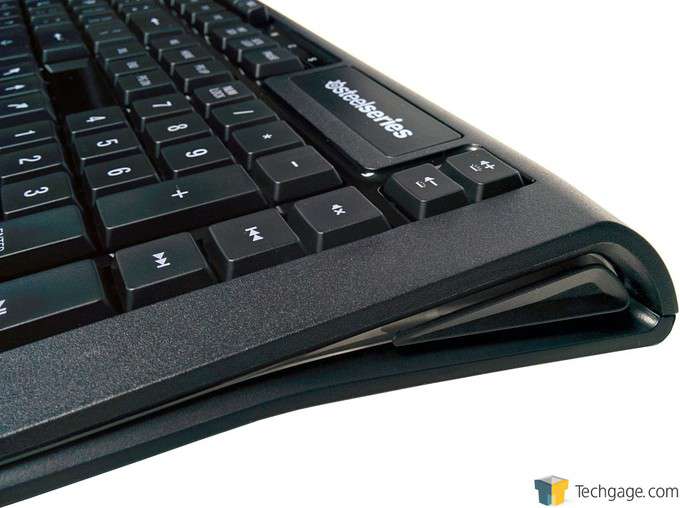 Flanking the braided cable are two integrated USB ports that can be used to run standard devices such as a headset, or to access flash drives provided the proper connections are made. 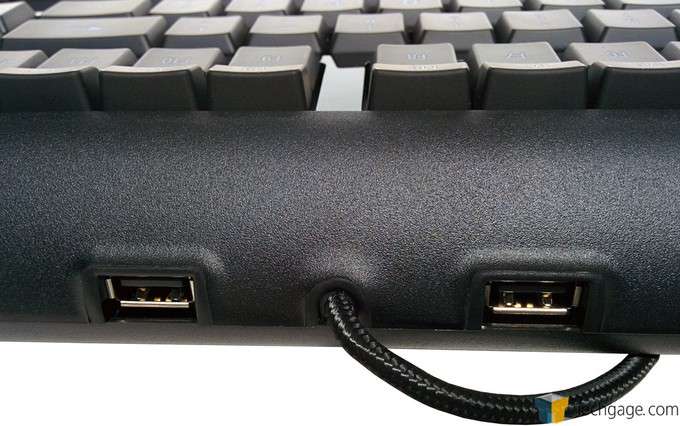 Flipping the Apex upside down shows the removable rubber feet. The Apex already has a mild profile due to the wedge design, but for those who like their keyboard to tip up even further, SteelSeries has included two high-profile feet that replace the standard rear ones. Also shown are the USB connections, one for the keyboard itself, and one for the two on-board ports. 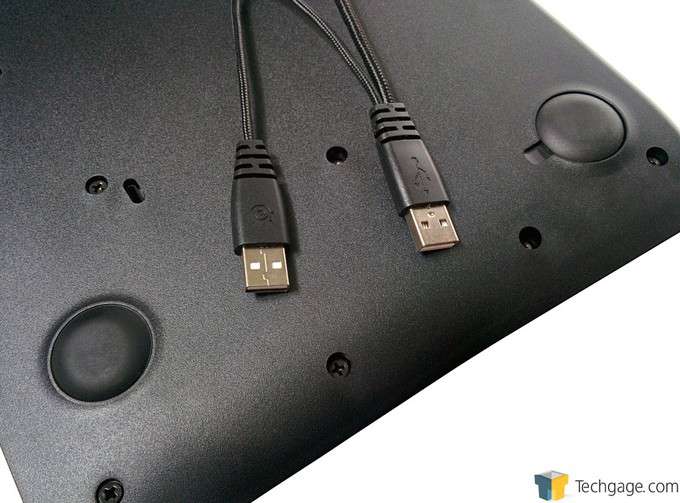 Included with the Apex are the high-profile rubber feet mentioned above, a quick start guide, and a SteelSeries sticker. The SteelSeries Engine software is needed to make full use of the Apex, but it will need to be downloaded first. 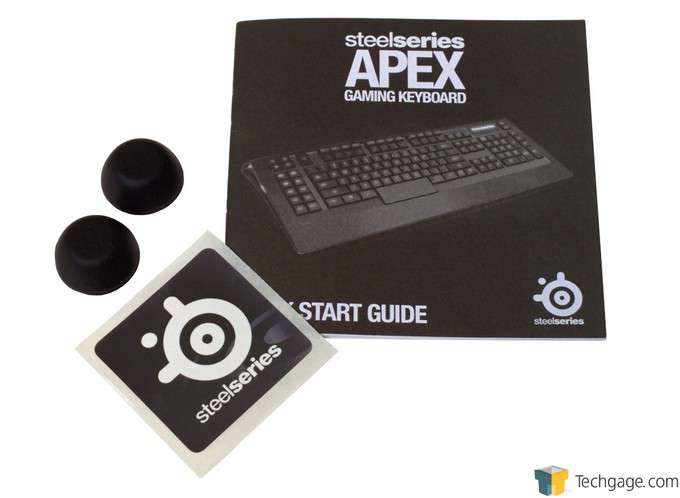 Once installed, the SteelSeries Engine 2 software displays everything in an easy to understand layout. The top left corner shows any devices that use the software, and below that is where the profile information is displayed. On the other side is where any current macros, or single key actions are listed, along with a handy tips section at the bottom that displays information based on what the mouse is hovering over.

The main section of the screen is where the meaty bits of the customization is found. On the buttons screen users can select any of the keys to set a macro, launch an application, set a text macro, or disable the key all together. To set one of these on a different layer, simply select the appropriate radio button at the bottom. 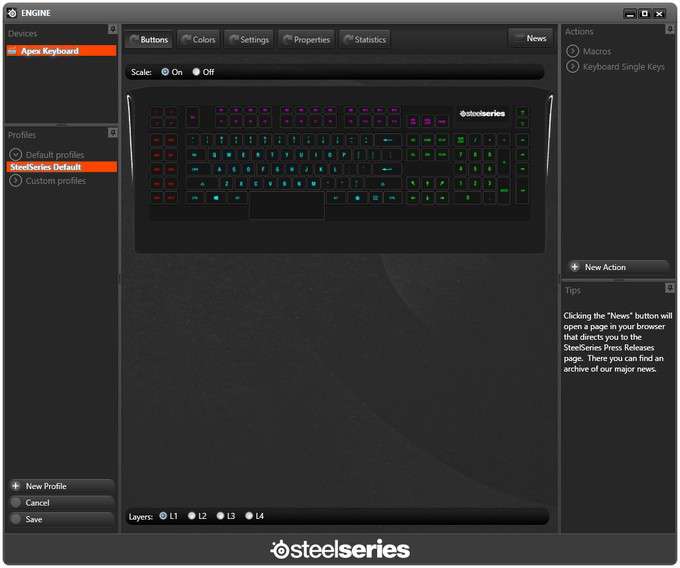 The Color section is where any of the zones can be set to a specific colour. The different layers already have some preset colours, but changing them is as easy as clicking on a zone and using the colour picker. There’s a slider that allows users to change the brightness level across the entire keyboard, or check the box to control each zone individually. 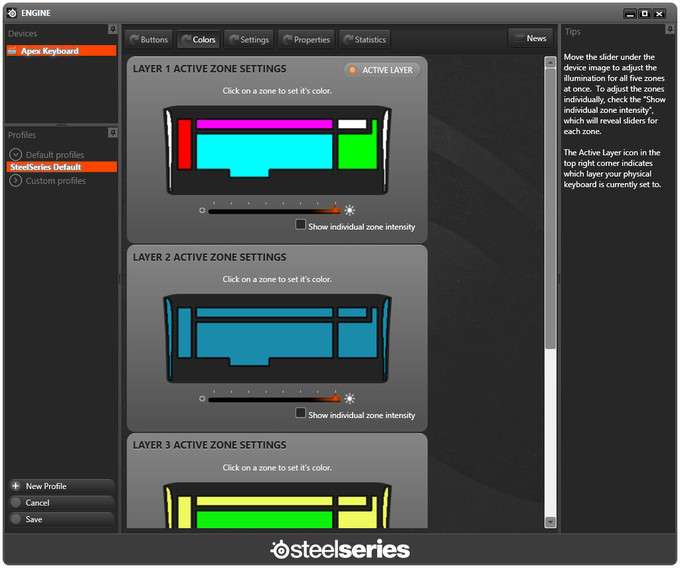 Settings is where the polling interval can be modified from the 1000Hz default, and the Properties screen allows for a profile to be loaded when an application launches. The final screen is Statistics, which will colour code how often certain keys are pressed to help users create new macros that might improve performance. 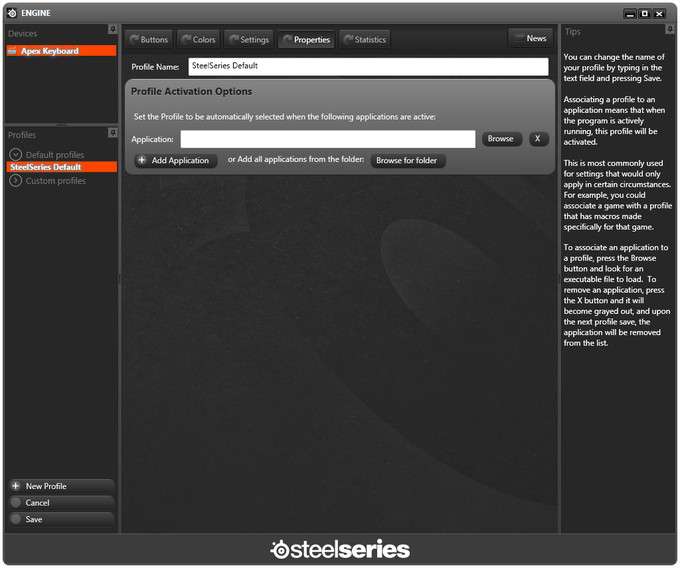 The software and firmware upgrade features aren’t listed anywhere in the UI, but can be accessed by right clicking on the SteelSeries Engine icon in the system tray. Rather that show all of that, we’ve decided to take the Apex for a test run instead.