I downloaded the latest drivers from SteelSeries’ website and installed them. The driver was a light 5.57mb file, the installation folder is a lighter 3.74mb, and the driver does not run in the background, and thus does not consume any system resources unless the user specifically opens the driver software to make changes. Bravo, SteelSeries! 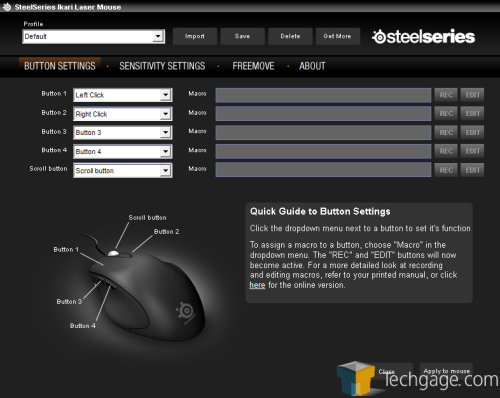 Here we have the main driver window, which has several tabs across the top to perform various functions. Profiles can always be saved, imported or deleted using the menu at the top of the screen. Any number of profiles can be saved to the user’s hard drive and loaded via the driver software, but the mouse’s onboard memory can only store one profile for use on any computer without drivers.

This is one of the better driver implementations I’ve seen, allowing easy profile switching via the driver as well as a degree of portability. The only thing some users might want is the ability to switch profiles without leaving a game – but there are probably a lot more users who are happy to not have drivers constantly using system resources. 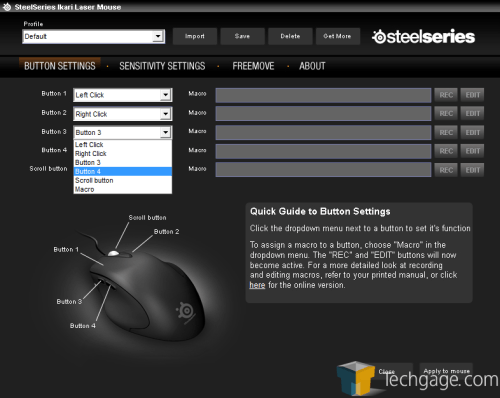 The button settings tab is where button functions are assigned. Note that the 5 main buttons can all be programmed as the user pleases – only the CPI switching button cannot be programmed. SteelSeries’ manual suggests that buttons can be assigned to things like ‘Internet forward/back’, single key-presses, macros, and possibly other functions.

Unfortunately, this drop-down menu appears to be all there is; looks like the only options are assigning other mouse buttons or a macro – I still haven’t been able to assign a single key-press to any button. For instance, I generally like to program the thumb buttons to lean left [Q] and lean right [E] or possibly to another key assigned to transmit voice, but the drop-down menu doesn’t provide an obvious way to simply assign a single keystroke.

I thought to myself that maybe a macro with a single command would work – only the button shouldn’t be released after a pre-determined delay, it should be released when the button is released, so maybe I should only record the Q <dn> and E <dn> actions and omit the <up> actions. What could possibly go wrong? They wouldn’t let the button continue to repeat indefinitely after the key was released, would they? Yes, they would.

Programming a single key with both <dn> and <up> commands as a macro allows me to lean in Call of Duty 4, but not FEAR, and I haven’t been able to transmit voice with this method either. So, it looks like the only useful way to program a single key to a given mouse button is via game setup menus, which is unfortunate considering how basic this functionality is.

Setting up actual macros, on the other hand, is a breeze. 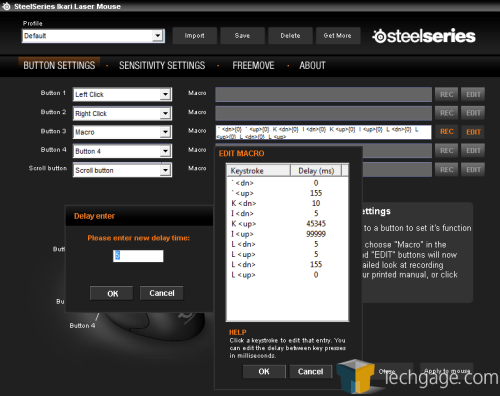 While there isn’t any way to record a macro exactly as it’s entered including timing, up to five buttons (technically ten commands, with <dn> and <up> for each button) can be programmed and timed by recording the keystrokes and then opening the edit menu. The delay that corresponds to an action is applied after the action. Delays can be anywhere from 0ms to 100 seconds. 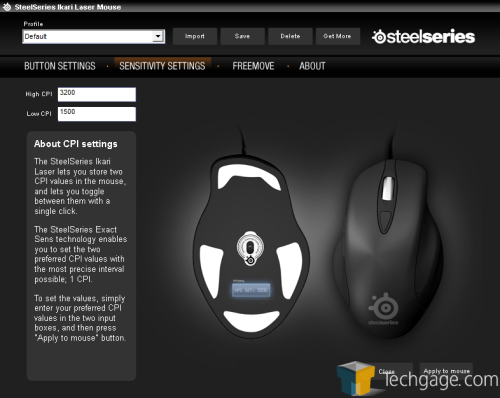 The sensitivity settings tab is where users can set their upper and lower CPI settings from 1 to 3200 in increments of 1. The ability to set up custom CPIs and toggle between them with a single button-press (instead of cycling through four to six DPI settings) is one of the most useful features I’ve ever seen on a mouse. It’s enough to make one wonder why no one else has done this yet.

The idea is so elemental – allow users to quickly switch between the sensitivities they use, and omit the ones they don’t. SteelSeries has taken this idea to it’s most elegant extreme with very fine sensitivity adjustment and minimal action required to toggle to the desired sensitivity. 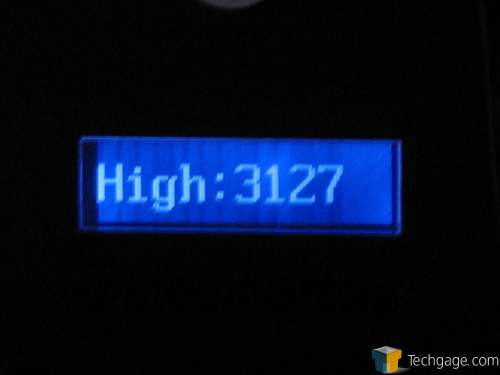 SteelSeries suggests that users should use the Ikari’s fine sensitivity adjustment to eliminate software interpolation by the operating system and/or game. Apparently, setting the software such that exactly one pixel is moved per count can reduce latency. I’m not sure if such small latencies would be noticed by anyone, but changing the settings is very easy. this link gives an easy way to get a recommended CPI, and the windows settings can be found in the control panel. 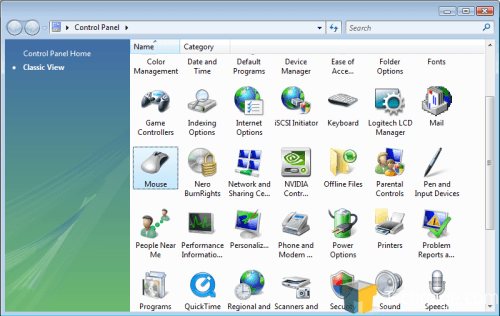 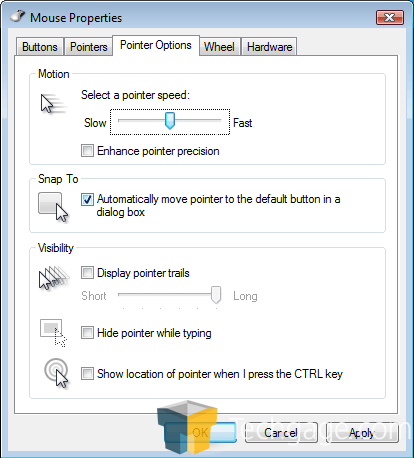 Simply set the sensitivity to the 5th tick on the scale (dead center) and turn off enhanced precision.

The CPI settings can also be adjusted on the mouse itself without the driver software. Simply toggle to the CPI setting you want to change, flip the mouse over to view the LCD screen, hold the CPI switch button for two seconds, adjust the CPI up or down using the scroll wheel and press the CPI switch button again when the desired CPI is reached. It doesn’t take long to cycle through the settings, either. Using quick flicks of the wheel, I was able to scroll from 1 to 3200 CPI in ~7 seconds. 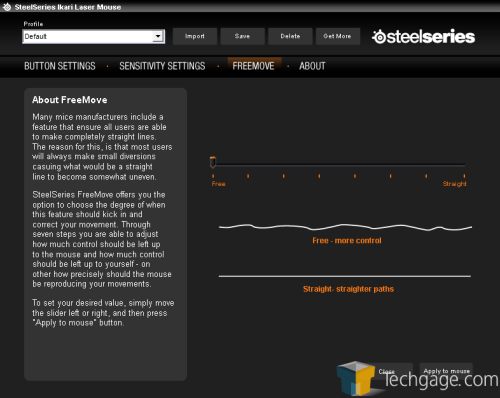 The FreeMove tab is where users can take advantage of another wonderfully simple yet revolutionary feature of the Ikari – FreeMove gives users complete control over corrective adjustments made by the mouse to their movements. SteelSeries’ explanation is better than I could write, so I’ll quote them.

“Let’s say you’re trying to make a horizontal movement. Of course your hand isn’t 100% steady, so your line will have slight diversions and wouldn’t be completely straight. Back in the day, the manufacturers of mouse sensors decided to include a feature in the optical sensors of their mice, that would help people draw straight lines. It would “remove” the small diversions, if the diversion was less than a certain angle and instead just draw a perfectly straight line.“

Since gamers never have to worry about drawing straight lines, the ability to control how much “correction” (read: “reduced precision”) is very much appreciated.

Finally, the ‘get more’ option on the top left links to SteelSeries’ website where users are supposed to be able to download profiles for various games. The linked page indicates that profiles are available for five games: Counterstrike 1.6, Counterstrike: Source, World of Warcraft, Warcraft 3, and Quake 4. As of this review, the profile list is completely pathetic. There are only two profiles there for Warcraft III (both of which use macros) and a whopping 15 profiles available for Counterstrike 1.6 – NONE of which have anything programmed to buttons 3 or 4. The only difference between these 15 profiles is the CPI settings! Profiles for the other 3 games are nowhere to be seen – there are literally only 17 profiles for two different games available via the ‘get more’ link.

(Also notice that none of the available profiles has any single key-press assigned to a button. Not too surprising since leaning is not possible in Counterstrike 1.6)

What SteelSeries needs to do is link to a forum where real users (not just sponsored gamers) can upload and share profiles that are actually useful. The current implementation is not only laughable, but makes SteelSeries look bad. Users go to their site to find good profiles and are left with the impression that SteelSeries’ sponsored gamers teams don’t play Call of Duty 4, F.E.A.R., Crysis, Counterstrike: Source, Bioshock, etc., etc. enough to have spent 5 minutes to make a profile.

Considering that there are only ~3 buttons most users will want to program, the uselessness of the ‘get more’ link isn’t a big deal, but it has the potential to be much more useful.

Overall, the drivers are useful and easy to navigate, but appear to be missing some basic key programming functionality at this time. The inability to program a single key to a mouse button is one of the most basic of mouse driver functions, and there is no excuse for its absence. 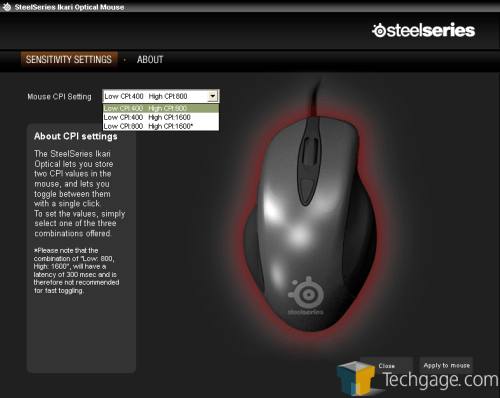