The Sensei is a mouse that’s meant to be used with or without its Windows software – that’s up to the user. However, the software gives far more flexibility than the mouse menu alone (and well, it’s far more sane than looking at a 128×32 screen). Our mouse didn’t include the software (which could be due to it being an earlier sample), so we grabbed the latest version off of SteelSeries’ website.

Most mouse software I’ve worked with has been horrible in almost all respects. It’s either been hard to use, gaudy – or both. SteelSeries’ software is neither of those. It looks great and is simple to understand. The one caveat is that you will lose your cursor for a moment whenever applying a new setting. This becomes rather frustrating after a long tweaking session.

The first tab in the software is for the button configuration. Most of this will be left default for most gamers, but the two right thumb buttons have the odd default action of acting as volume change. In this state, they cannot be configured inside of a game. For that, each button will need to be configured as a macro – even if it’s just a simple function. 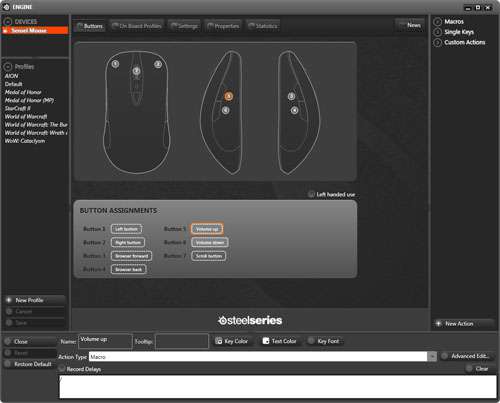 In essence, in doing this you will be applying regular keyboard keys to each button. For one of mine, I used “/” since I never use that button in any game. This way, you can tie functions to that button inside of a game and use it on the mouse. It also means that if you are in a text editor, hitting these buttons will type whatever key they are tied to. Case in point: /–/-//-/. That was all the Sensei.

This design is clunky, because I expected to be able to use those thumb buttons out-of-the-box. This is a gaming mouse, after all… not a “media mouse”.

Next up is the “On Board Profiles”. Here, the profiles stored on the PC can be dragged over to the mouse, and vice versa. Though as mentioned earlier, I didn’t personally have luck with the latter. 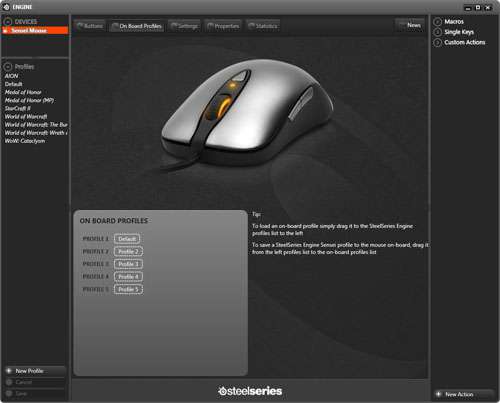 “Settings” is where all the good stuff happens. Here, features like ExactSens, Freemove, ExactAccel and others can be configured, along with the LED lights, the LCD brightness, custom logo and so forth. In the event that you want to start fresh, a restore function is also available. 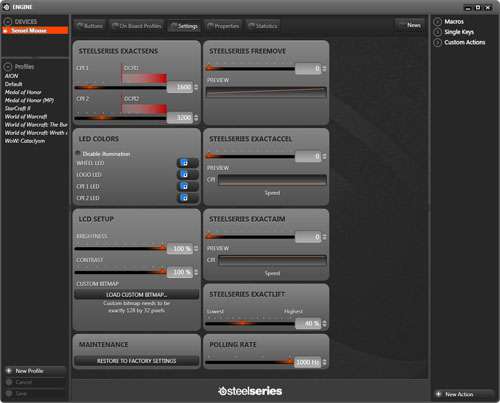 Most of the features found here won’t appeal to most people, and don’t to me. CPI is the main exception since that does have a use in most games I play, but the others are for those who really don’t mind spending the time tweaking their mouse to give them the best possible response. ExactAim is one feature some will want to look at, as it will make attempting headshots a lot easier by lowering your CPI when needed.

The three LEDs can be color-customized on this screen also, with a touted 16.8 million colors to choose from. Given such a wide range of color, I had hoped that picking the perfect shade would be simple, but it’s not. There are 10 pre-defined colors to choose from, but others can be chosen via clicking on an area in the color chart:. 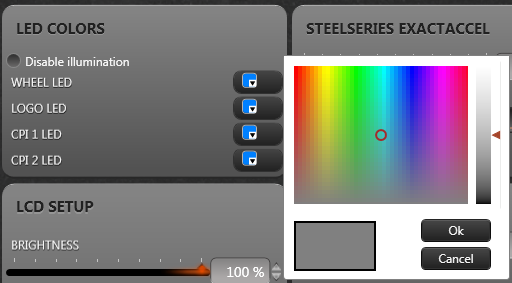 For the most part, this is suitable, but in the event you want all three LEDs to share the same shade, it’s just not going to happen – or at least be exact. Ideally, the color-chooser should accept RGB and Hex values for the colors, because that would rid that problem.

That aside, the touting of “16.8 million” colors is a bit generous, as it’s not true. Unless the color is dark, the result is going to be nothing like what’s chosen. Dark red, orange, blue and so on look fine, but lighter colors that don’t fall under those pre-defined base colors will look pink. White looks pink, light and dark brown look pink, and even dark gray looks pink.

I like darker colors, especially blue, so this issue doesn’t bother me per se. But when the mouse is claimed to support 16.8 million colors when it clearly doesn’t, it leaves a bit of a bad taste in my mouth. On top of that, some colors aren’t quite “solid”, either. Regardless of which color is chosen, the LED behind the logo will not be flush; rather darker in the middle and lighter towards the outer edges. 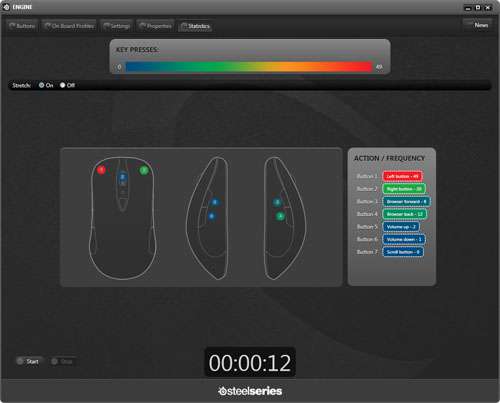 Past the colors, there’s a “Properties” tab for launching a particular profile whenever a certain game is launched, and then “Statistics” as seen above. This tool is rather fun because it allows you to record all of your mouse usage during a gaming session. This isn’t useful, but it’s cool.

Though I do think the software here has a couple of niggles, nothing is major. That says a lot, given that most mouse software I’ve used in the past I would have paid to not use. This looks great and is simple to understand. If I could change one thing, it’d be easier configuration of the right thumb buttons. Needing a macro to pull it off is a little bizarre.