by Jamie Fletcher on November 7, 2011 in Peripherals

If you’re the type gamer who spends more than the normal amount of time tweaking your peripherals, then the Shift keyboard from SteelSeries deserves your consideration. Not only does it allow you to configure every single key, it also enables you to record macros on-the-fly and even switch out the entire keyset for another.

With the Shift and ZBoard, the hardware was certainly unique, but it was the software that really drove home the point about the sheer flexibility of these keyboards. The ability to redefine the function of every single key would have many scratching their heads – who needs that kind of functionality? Well there are certainly people out there and the most common reasons comes down to multiplayer and strategy gaming.

While within a single player first person shooter environment, your left hand stays firmly attached to the WASD keys with your index flicking between F, R, E, G and the odd number… nothing particularly complex is going on. Step things up into a multiplayer game and you have different commands you can enable, chat windows, team command shortcuts and so forth, and you suddenly find yourself spending more time organizing than actually playing. Enter macros.

While many may see macros as cheating, providing people an unfair advantage, they will not play a game for you. Instead, they are designed to make repetitive tasks faster and easier. Keep flicking between /raid and /guild chat? Make them a macro. People not using a voice client and you need to put up event warnings? Save it to a macro.

Companies such as SteelSeries cater to the gaming masses, but the hardware can be used for more than just gaming. 3D and graphic design can both benefit from the flexibility, since the drivers can be setup to be application-sensitive (only use certain macro layouts for certain games/applications). So peripherals such as this can be used to help you work and play. 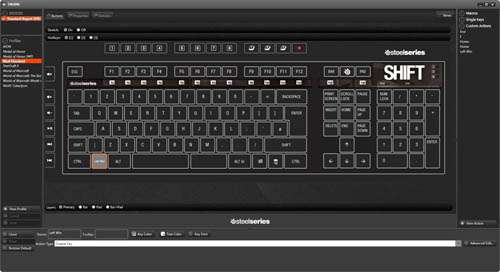 As is more common these days, there is no driver CD for you to install from; you must head on over to SteelSeries’ website to download them. While an inconvenience, it ensures that the latest version is used – often a second nature practice amongst gamers. Once installed and loaded, you are presented with a large interface to configure the keyboard.

While initially overwhelming, the interface is rather simple and intuitive to use. The keyboard is laid out in front of you, and selecting a key on screen will pull up the macro edit window below where you can redefine it. Each has one of three major functions; macro (default), application launcher, or disabled. There are also 4 layers for each key, controlled via the Bar and Pad modifier keys; found where the print/scroll/pause keys are normally placed. With these modifiers in place, it’s possible to configure the keyboard with over 400 macros… per profile. Yes, I’m completely bewildered by that number too. 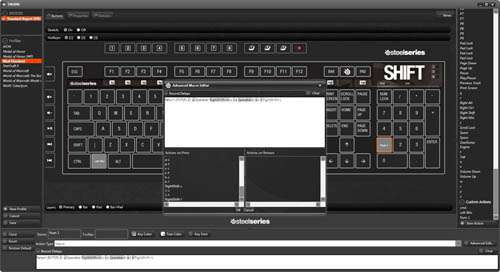 More complex macros can be made or edited via the advanced editor panel, allowing for the insertion of delays, mouse actions and non-standard key functions. With the profile saved, you can then assign it an application trigger in the properties panel if desired. Multiple application triggers can be used if required. Each key can also be color and font-coded, to make it easier to see important keys. 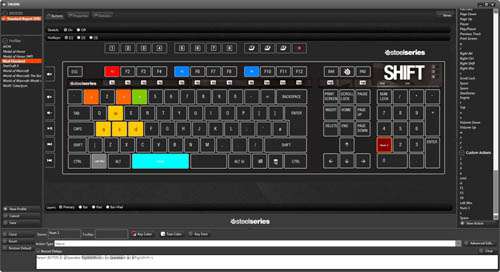 If you purchase one of the additional game specific keysets available, switching it out will result in the editor interface changing too, matching the game selected. The numpad is replaced with an array of new game-specific functions. In addition, certain standard keys will have new Bar and Pad modifier options; such as extended emote functions along the F keys.

Built into the editor is a key press analyzer, which is a glorified ‘Actions Per Minute’ counter. It’s also useful for spotting certain keys that are used frequently, allowing them to be remapped to more easily accessible locations.