by Jamie Fletcher on November 7, 2011 in Peripherals

If you’re the type gamer who spends more than the normal amount of time tweaking your peripherals, then the Shift keyboard from SteelSeries deserves your consideration. Not only does it allow you to configure every single key, it also enables you to record macros on-the-fly and even switch out the entire keyset for another.

To call this review long-term would be somewhat of an understatement as the keyboard has been in use for several months, providing ample opportunity to test its features and to become accustomed to its layout.

The standard keyset has some alterations to accommodate the extra buttons and to take gamer preferences into consideration. The Win key on the left side is on the small side, minimizing accidental pressing in-game (although the key can be disabled via software). While the space bar may be split, it rarely interferes with typing.

With the inclusion of three new keys; Bar, Pad and SteelSeries (opens the software editor), the Print Screen, Scroll Lock and Pause keys have been pushed down and are part of the Insert, Home and Page-up block. This does push the keys down against the Arrow keys, but shouldn’t interfere with normal use.

Key spacing is a little bit wide, providing a better feel for key placement, but due to the fact that the keys themselves are not actually attached to the keyboard, they do wobble a fair bit on the rubber domes below. This results in a sort of ‘squishy’ and spongy feeling to the keys. Key travel is still normal for a full height key, but with the usual rubber bounce for feedback. 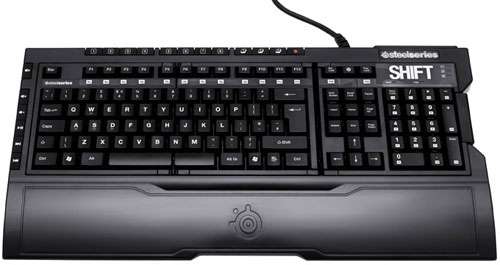 When the keyset is replaced with one of the game-specific ones, the numpad and arrow keys are completely replaced with a different style and shape. Most of the keys become circular and the arrow keys are larger with rounded edges. The rounded edges actually proved to be quite a problem for me as it became extremely difficult to determine which key I was pressing due to the tight spacing and no sharp edges to feel for.

With new keys placed around the arrows too, blind navigation became extremely problematic since my hand rested on a whole bunch of keys with no easy way to distinguish which was which. Depending on the game set in use, key placement can also be all over the place too. Print Screen is often used by games to take screenshots (although some will use other keys), but with the 3 different key sets reviewed (Standard, MoH and WoW Cataclysm), the print screen key is in 3 different places. This makes switching from one keyset set to another a little more challenging due to a lack of consistency.

While all keys can be re-programmed, the different game sets make use of a different number of keys, so it would be best to stick with a single layout – if you can manage without the numpad of course.

Though much of the layout issues will be subjective, a number of issues did crop up as a result of the software – the make or break element of any gaming peripheral. While extremely flexible with regard to programmability, two separate keys proved to be consistently problematic, even through multiple updates. The Left Shift key and the B key.

For some unknown reason, the Left Shift key didn’t always act as a shift key, it was either completely ignored or performed as Volume Up. This was not just a problem with the software, but the hardware, as the key was completely ignored under multiple Linux OS distros and behaved inconsistently under Windows 7 and XP on different PCs. Majority of testing was done through Windows 7.

The B key simply failed to capitalise correctly when typing quickly, resulting in ‘Gb’ or Tb’ instead of ‘GB’ or ‘TB’ (important distinctions for us geeks). When recorded through the macro software, the issue became a little clearer. When typing slowly, ‘GB’ would be recorded [Shift+g+b]; when typed quickly, it would be recorded as [Shift+g b+Shift] – meaning that the B key was interrupting the shift somehow.

These two issues did become somewhat infuriating after a while, with the only solution being to change typing habits (using the right shift key and slowing down when typing a B).

When the keyboard was initially received, the drivers at the time suffered from some serious memory issues. Swapping key sets would continuously increase memory usage with each swap, resulting in memory consumption going from 80MB to over 300MB. This has since been corrected, but now replaced with a different issue – BSOD. After multiple key set swaps, the PC would lockup with a blue screen indicating that a device was trying to write to a read only section of memory. So, SteelSeries still has some memory issues to address with the software, especially since the engine.exe can sit in the background consuming 130MB of RAM.

These issues certainly tarnish an otherwise very useful and extremely flexible product. The problem is that the Shift has been for sale for quite some time and driver updates come out every few months, so it would have been nice to see these issues corrected already.

While the issues mentioned are annoying, they can be fixed – given enough time. The problem remains that nearly every peripheral has some kind of software issue. It is unfortunate that the Shift follows suit. It can not detract from the fact that the engine is extremely easy to use, which is quite refreshing, and does extended the functionality of the keyboard substantially. The keysets themselves are a bit of a gimmick, but are not outrageously expensive either. It is the software that makes the keysets useful.

The SteelSeries Shift is definitely a keyboard to take note of if you are heavily into customizing and macros. The keysets are a nice touch but are only part of what makes the keyboard great. If the software can be polished up, then we would have quite the piece of equipment. As it stands though, there are issues that still need addressing.