by Rob Williams on April 18, 2006 in Miscellaneous

Most people have not even heard of Super Talent, but they are not new to the memory market. They are however new to the enthusiast side of things. It looks like they know what they are doing, because these modules are FAST. Let’s take a deep look and see just how impressive they are.

When you look to purchase new memory, there is a plethora of company names that instantly come to mind. Then there are some others that you rarely hear about, and because of this they usually get overlooked. Until the enthusiast market get’s ahold of them, that is. Super Talent has been around for a while, but have only recently started delivering modules to the enthusiast and gamer market. What classifies the modules as being made for the enthusiast? High speeds and tight timings to name a few. The best chips from Micron and Samsung don’t hurt either.

The modules I am taking a look at today are for the DDR2 crowd, so if you want to beef up your Intel, don’t leave this review. Of course, it’s only a matter of another 6 weeks before the consumer can utilize DDR2 with their AMD systems, once the AM2 socket launches. Because of this, even if you have no interest in DDR2 right now, you should still read up on it because it is going to be the common standard by the summer.

Let’s take a look at what we are dealing with today.

Let’s begin with the packaging. It’s hard to tell from looking at the pictures, but this is by far the smallest blister pack I have seen modules come in. They don’t leave much room for anything else, but the modules are still quite secure when sealed up. One thing you may notice immediately is that the packaging has very little info about the modules inside, except that this is a 2 * 1GB kit. The lack of information surprised me actually. There is no note of the speed, timings or required voltages. You could split up the model number to figure some of it out, though: T800UX2GC4. Obviously this represents DDR2-800 speeds, and I assume the U has something to do with the low latency. C4 is likely the CL (CAS Latency), which is 4. X2 is for two modules, G for gaming enthusiast and T represents a DDR2 module. 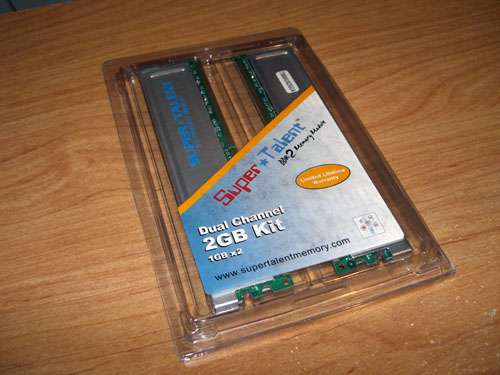 To get the timings information, you will have to hit up their web site, but even then, there are no mention of voltages. As per JEDEC standard, I assume that at DDR2-800 speeds and stock timings, these modules should work flawlessly on 1.8v or 1.9v.

Back to the modules themselves. Heat spreaders are pretty much a standard now, and Super Talent realizes this. These modules are equipped with a very light aluminum spreader that’s indented to press against all 16 chips on each module. Nothing innovative here, but I am happy to see them be as light as they are. Generally, the lighter the heat spreader is, the easier the modules are to cool, especially with lots of overclocking. The spreaders are glued on, so if you wish to remove them you will want to have the proper glue to re-apply, or perform the task quickly. Removing the heat spreaders are generally not advised with BGA chips, due to the fact that they can come off the PCB far easier than TSOP ones.