Its been quite a while since I’ve had the opportunity to play with some Super Talent modules, so I was looking forward to seeing what I could muster with their latest DDR2-1000 sticks. When I reviewed their PC2-6400 kit this past April, I was absolutely blown away by their potential. Those specifically could have been the modules that helped Super Talent become a small stature in the enthusiast community. They are now trying to continue with their growth in that area, so we can hope to have some great tweaking ability with these modules today.

As we are all well aware, buying such a fast kit does not come cheap. Quickly checking a popular e-tailer I found these modules for $419.99. Surprisingly enough, this price is actually a deal after taking a look at the other PC2-8000 kits. This one we are taking a look at today has the benefit of a 4 CAS latency, while most others have straight 5-5-5-15 timings.

Since April, Super Talent has been making some headway into e-tailer placement. Back then, it was difficult to find their modules anywhere, but as I have found out, quick searches through a few of the popular e-tailers should bring up a couple listings now. Not only has that fact changed since our last review, but the packaging and heatspreaders have also been redesigned. Without further ado, let’s take a look at the modules themselves and then move onto testing.

The packaging this time around has been improved. The original version was a simple clamshell, which wasn’t too bad to begin with but was unpleasing to the eyes. This packaging is more colorful and uses the more standard package design that most memory manufacturers use. 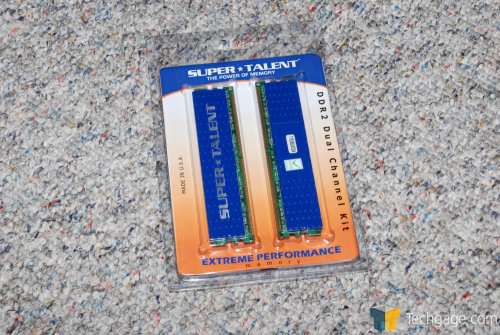 No more plain Jane silver heatspreaders here! Super Talent now uses these dark blue colored spreaders which are designed to dissipate heat better than the prior version. What makes the spreaders stand out is the huge Super Talent logo that stretches across the front. At first I wasn’t impressed by these spreaders at all, but after using them for a bit they have grown on me. Not the best looking spreaders out there, but the main thing is heat dissipation, which these should easily handle well. 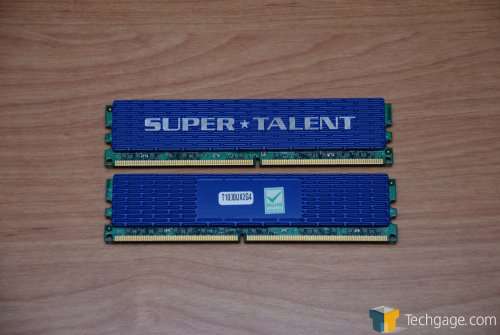 One complaint I had with the original performance modules from these guys is that there was no information on the packaging or the modules themselves. Unless you are a memory enthusiast, you will probably not have a sweet clue what speeds or frequencies these modules are. Even as an enthusiast, all you can decipher is that these are rated for DDR2-1000 and have a CAS latency of 4. You can easily hit up their website to find out that the timings are 4-5-4-15, but you will have to figure out the voltage on your own. 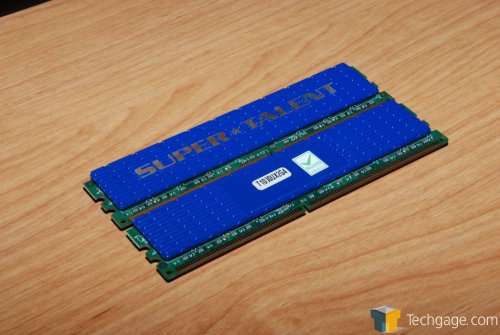 These are nice looking modules. What I liked most though, is that they felt solid to hold… it’s one tough spreader.