I have already referred to the Super Talent PC2-6400 that I reviewed this past April, and I will do so again because both of these kits have a lot of similarities. Primarily the chips that they both use, which is Micron D9GKX. That’s not to say you should run out and purchase one of the previously mentioned kits, because shortly after our review the modules were converted over to use D9GMH chips instead. Those are still excellent, but GKX is really the cream of the crop.

GKX actually come from Micron with the recommended CAS latency of 5, but that’s foolish for such a high-end chip, and -really- playing it safe. There’s little doubt that these chips are being used in most of the top-end memory kits available right now, and to earn that rating most will have a CL of 4.

Chips aside, these modules as mentioned include stock timings of 4-5-4-15, which I find a little odd. These modules had absolutely no problem handling 4-4-4-15 at stock voltage, so they could have easily considered that to be the actual timings. However, that’s not to say that 4-4-4 will work on all systems, so perhaps tRCD of 5 is a wise move.

One point of interest is that these modules actually include a 500MHz setting in the SPD, which not all DDR2-1000 modules include for whatever reason. Everything is in check, except tRC which they have at 27. This is not a problem, but I wasn’t even aware you could go beyond a tRC of 26 on any system. At least on my past two AM2 motherboards I could not.

That said, I did have some fun overclocking with these modules, but due to a CPU bottleneck I was unable to push them as far as I’d like to. My X2 4600+ maxes out at 2.75GHz, and even that is not 100% reliable. I have a Core 2 Duo machine arriving in a few weeks which should better cater to reaching maximum overclocks. So bare in mind, even though I max out at DDR2-1100, chances are good that they can reach DDR2-1200 and beyond since that’s not uncommon for neither D9GMH nor D9GKX. 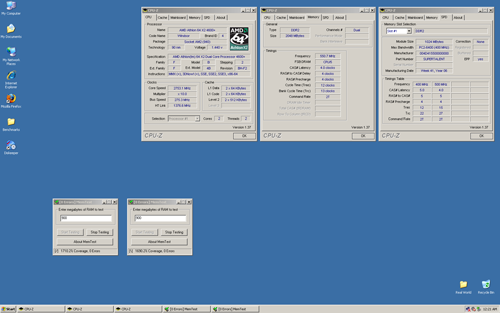 Regardless of what product we are benchmarking, our testing machine goes through optimizations before we begin. All testing is performed on a stand-alone version of Windows XP Professional with SP2. System services not needed are closed down, in addition to unwanted programs in the system tray. Computer is cleaned up of scrap files, which includes emptying of the recycle bin. Directly before any testing occurs, the OS hard drive is defragged using Diskeeper 10 Pro Premier. Finally, we assure that the computer has adequate cooling and airflow.

For comparison sake, I am also benchmarking Kingstons 2GB HyperX kit, which also has a stock speed of DDR2-1000 and uses Micron D9GKX chips. While we don’t expect one kit to be a better performer (they are the same price and specs), we like to see if the Super Talent kit can keep up to the competiton. If it fails to do so, then somethings wrong. During the afternoon of testing, the room temperature hovered between 79°F and 80°F. Yes, it still gets that warm in this room in December with a window open. As sad as that is.