by Jamie Fletcher on January 7, 2013 in Miscellaneous

It’s not often we get to review cameras here at Techgage, but this particular one caught our attention. A self-contained, rugged, water-proof, infrared, long-life, external camera for keeping an eye on those distant locations, without having to worry about trailing cables and storage. With a “set it and forget it” attitude, the OutbackCam from Swann has a lot going for it, so let’s see what it’s capable of.

The OutbackCam packs a fair bit of tech and features into a small package, suitable for hiding away from prying eyes. Under the water-proof exterior is a 5 megapixel camera which can take pictures at 2560×1920 and record video at 640×480, both of which are in color during the day and monochrome infrared during the night. The camera uses a Passive Infrared (PIR) detector for motion-detection to save power. All images are time-stamped, complete with lunar cycle. The camera has auto-exposure and white-balance. All media is stored on the supplied 4GB SD card, and the whole thing runs off of 4x AA batteries, lasting up to a month of unattended use. Quite the package. 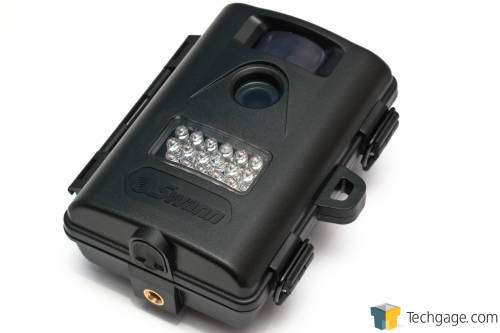 The exterior is of a very rugged design. Thick plastics, padlock loop, clasp locks, wide hinge; it’s all here to keep the elements out and your data in. 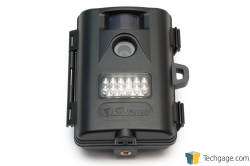 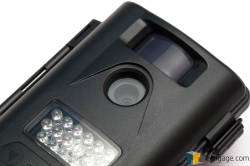 From top to bottom is the wide-angle PIR motion detector, 5MP camera, and an infrared LED array for additional illumination at night. 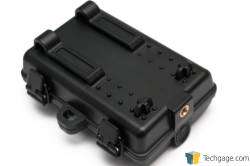 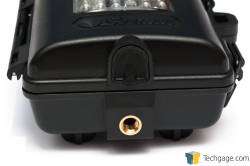 Flipping the unit over and looking at the back, we can see the two grooves for the nylon webbing… and that’s about it. The brass ring that you can just about see is a standard camera screw, allowing it to be mounted on nearly all tripods and camera gear. 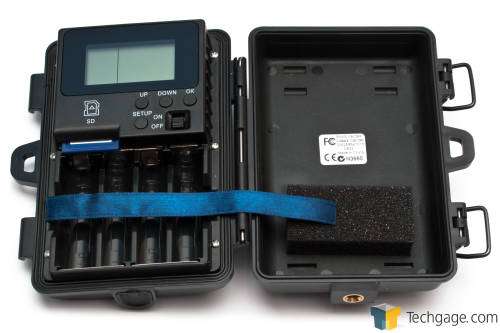 Popping the lid open reveals a double seal, rubberized groove the goes around the entire perimeter, keeping both water and dust away from the electronics inside. The 4x AA batteries take prime position with the interface module above. There is a small slot for the full-sized SD card. There is also a USB port to access the SD card without unplugging. 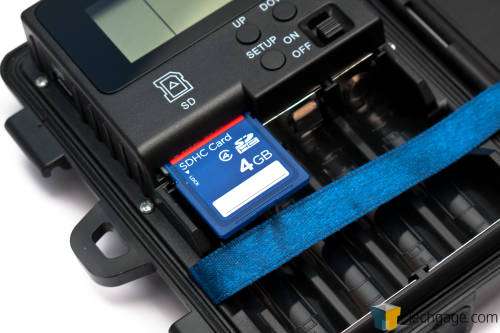 The interface is very simple but not the most intuitive, requiring diligent reading of the manual for proper configuration (setting the date/time was not straightforward). There are numerous options for controlling how and when pictures/movies should be taken, such as picture quality, single or multiple shots, minimum delay between shots, a time-lapse mode to take pictures on a regular basis, as well as when triggered by the motion sensor. 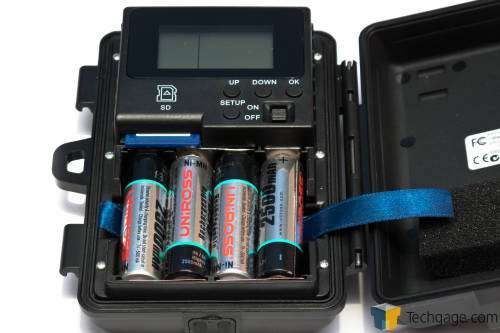 With rechargeable batteries installed, we’re ready to take the OutbackCam outside and put it through some of the craziest weather known to man… British.