by Jamie Fletcher on January 7, 2013 in Miscellaneous

It’s winter time here in the UK, and in traditional style, the weather is unpredictable. Half the country is flooded, has high winds, and temperatures are rapidly fluctuating between -7ºC to 15ºC… the perfect opportunity to place a $100 camera outside to brave the elements for a month. Torrential downpours of rain, followed by nights of high winds and bitter cold. Ice on the roads, hail from the heavens, more rain, then a week of silent nights and a lightning storm. This camera has certainly been put through its paces.

Two locations in my garden were used, with the majority of the time spent hanging from an air dryer (clothes line), looking out for anything that may cross the path or garden (and being British, the garden is small). However, the content of the shots is not important, but the quality. The garden is south-facing, with the camera facing northwest and down towards the ground, so it is not taking shots with the sun directly in view.

For the photographers out there, each photo taken has some meta information stored with it. The aperture size and ISO levels are both fixed to f/2.8 and ISO 100; the only thing that changes between shots is the exposure time. 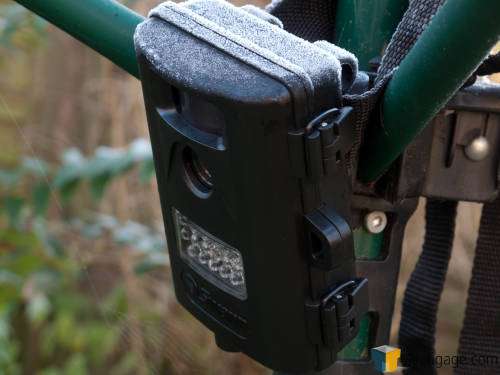 Since it is winter, and cold, the only real activity captured was of neighbor’s cats and the odd person shuffling back and forth, but there was a little (if blurry) surprise too.

Disclaimer: Images taken with this camera have not been edited beyond resizing and watermarking for publishing. Full-size versions of these images will be in PNG format to prevent additional JPG compression artifacts, and as such, will be significantly larger.

With all this in mind, I’ll start with the coolest aspect of the camera, night vision via infrared. 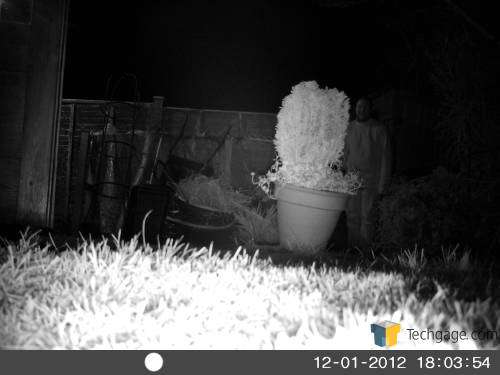 That monstrosity in the background behind the potted conifer, giving you the evil eye, is me (waves sinisterly). The OutbackCam was originally at ground level as a quick test to check range. The PIR sensor is capable of detecting movement of up to 10 meters away, but does include a blind-spot dead-center of the sensor (and is documented in the manual). This may introduce some difficulties for certain scenarios and careful positioning will be required.

Typically when we look at an infrared image we also think thermal imaging; black is cold and white is hot (relatively speaking), however, neither the plant or grass is hot in this case. So what’s going on? When the PIR sensor triggers the camera at night, it also triggers the IR-LED array which creates a spotlight; the plants are just reflecting back the IR from the LEDs. Thermal radiation can be seen in both infrared and visible wavelengths of light, but this does not mean that all IR is hot.

Looking beyond the plants and out-of-range of the LED array, is me, happily glowing away at the brighter end of the spectrum. I’ll point out now that my trousers (pants) are dark brown and the jumper (sweater) is a dark navy-blue… hooray for poor color coordination. Due to the magic of ambient IR and my internal body-heat, I’m quite clearly visible – perfect for keeping an eye on would-be trespassers.

The problem though is with subtlety; when in IR mode, the LED array is faintly visible during exposure. I could not accurately take a picture of the LED array in operation, but it gives off a red glow from each LED. This may alarm someone (or something) if in clear view, so it’s something to watch out for, but only at night. 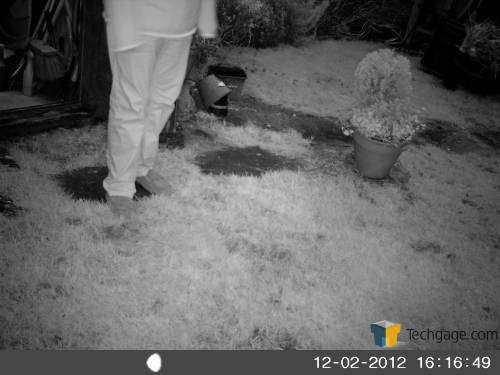 The camera was moved and setup to record the path leading to the house, perched on the air-dryer as seen in an earlier photo. While the above photo is not of any major significance, those with acute eyes may notice something. Look at the time of day. At 16:16, it’s not night time just yet, yet the IR sensor is kicking in. This is a very good example of the camera’s ability to tell when things are too dark for a color photo, instead of relying on a time of day to switch modes. 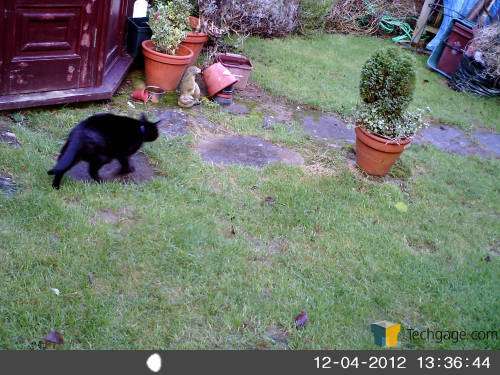 Moving into the realm of color, a neighbor’s cat trips the sensor and is caught scuttling across the lawn, probably to commit some nefarious deed. There is blurring around the cat and this is due to the exposure time of 1/35s. This is all automated and the user has no control over these settings. This blur will be rather consistent throughout most of the shots taken. Out of some 120 photos taken, the slowest exposure was 1/13s and the highest 1/115s. 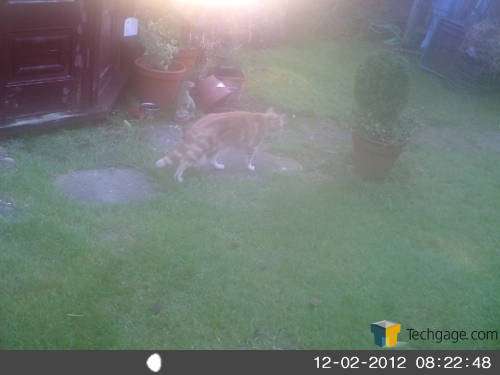 Another moggy caught in the act, but what’s going on this time? This is where I noticed a slight problem with the lens; it’s not completely sealed against the elements and has suffered at the hands of condensation. I noticed this at the end of testing when I brought the camera inside. When outside, the lens was clear; when brought inside, the lens was covered with condensation. Wiping it off with a cloth had no effect, thus it was on the inside of the camera. Popping the clasps open confirmed this, as the batteries had small water droplets forming on them. 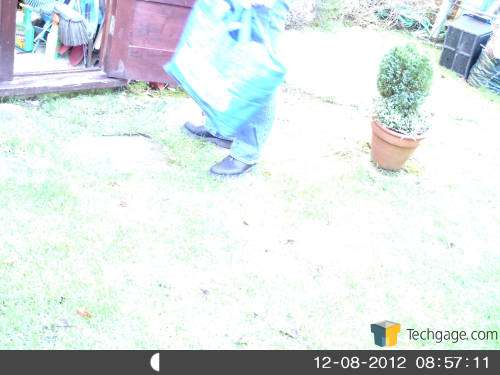 Yup, this isn’t quite so good, and it’s a little hard to figure out why. It’s taken at roughly the same time as the previous photo, but a different day. The previous was 1/35 and this one is 1/13, so there appears to be a problem with the way the camera calculates exposure times. Perhaps a mix of IR and color modes interfering. 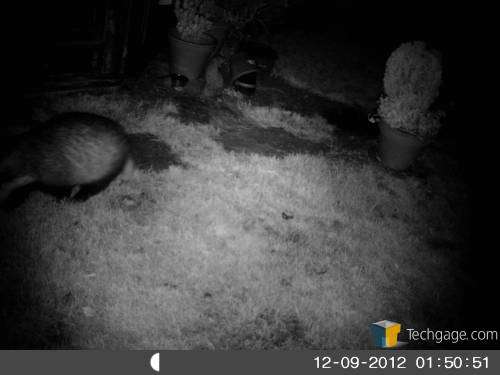 During the month that the OutbackCam was in place, did I capture anything of interest in a sprawling rural British home? Well actually, yes. It’s not completely obvious, but look to the blob, middle-left, and be in awe at the site of a wild badger. Unlike many wild animals in winter, badgers do not hibernate. For local residents such as myself, this causes havoc on garbage collection days; it’s not uncommon to find litter dotting the street the following day when the badgers have been out to play. 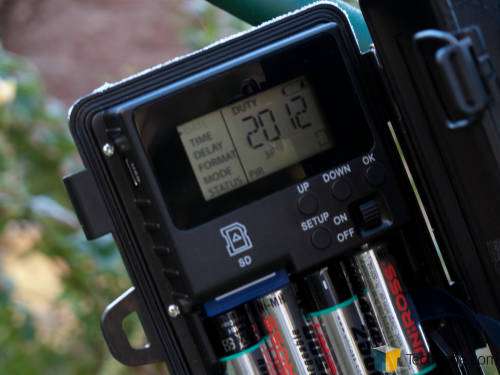 So after a long stint outside, cracking open the case we can see that the camera is still operational through some hellish weather, albeit with low batteries. It’s worth pointing out that the batteries you end up using have to be able to cope with whatever weather thrown at them. If you live in a hot environment, it would probably be a bad idea to use lithium batteries, same again in extreme cold.

In terms of image quality, it’s a mixed bag. Exposure calculations are a little rough and this can result in unpredictable image quality, either with over-exposure or blurry movement. White balance tends to favor warmer tones. Zooming in on a few shots, you can see an aggressive amount of noise correction and sharpening artifacts. Under low-light conditions, the camera is quick to switch to IR mode and this does help keep clearer images, even if they are monochromatic. The IR-LED array can be a bit too powerful at close range, but quickly fades with distant objects. At the 10m mark, the LED spotlight is almost useless.

One problem that was made apparent after such an extended period is just how few pictures were taken. Despite walking in front of the sensor on numerous occasions, the camera failed to trigger. This could be in part to do with the placement and the blind-spot of the PIR sensor being centered on the door, or perhaps the sensor is too aggressive with dismissing false positives to conserve storage on the SD card.

For £70 or $100, the Swann OutbackCam is a nice bit of kit, the IR mode being very useful. The batteries last a long time, it can support a 32GB SD card for lots of footage and photos. The support for time-lapse in a rugged package would be rather appealing too for a number of photographers. However, image quality and sensitivity is a little too unpredictable. In terms of security, I doubt the camera could take an ‘identifiable’ photo of a perpetrator due to the long exposure times creating blur, as well as the aggressive noise reduction and sharpening, distorting the image.

For a reasonably cheap, long life, external security camera, the OutbackCam isn’t too bad, but you may find yourself wanting in image quality. It’s a good trade-off between features and image quality, since finding an alternative would probably cost significantly more.