I tested the Ramcool combined with the MCW60 GPU block versus the stock air cooling, no I didn’t bother with ramsinks as the stock cooling is pretty healthy. The GPU temp never got above 56*C and the cooler is solid copper with large thin fins all the way over the ram. It wasn’t GPU only with no cooling on the ram.

Note that my ram Mhz is in actual Mhz rather than in double data rate as that’s only effective clock speed.

I tested the stability of OC’s with 3DMark ’06 and by several sessions of gaming with Call of Duty 2. I played a bit of Oblivion as well. This card is simply amazing as I am playing both games at 1600X1200 with max details and no lag. The trouble is that at the same res the stock cooling kept things going long also with no lag. Sucks for a real comparison but fortunately I have the 3DMark ’06 scores to compare, I won’t rely on the CPU score and will instead give the shadermark score.

There’s a Core 2 Duo in the database running 7950GT’s that are over my system in terms of overall score due to the CPU score but were considerably lower in SM scores. As a result there are two SM scores for single 7950GT’s in my CPU clock speed range (2000Mhz to 2900Mhz) that are higher than this setup but one is volt modded to 1.7V and is OC’ed to 704 core and 823 mem. Only one that’s higher looks to be un-modified and it’s a horse race.

Nothing drastic to be honest, the results in games is likely more drastic but as this isn’t a videocard review I’m not going into great depth, the point of the exercise was to achieve a higher stable OC. I tried the driver’s "Suggested OC" of 665 core 750 mem and I discovered to my horror that 3DMark would drop to frame rates in line with my 6800nu when run after a few seconds.

No artifacts but the FPS dropped from an average of 16 on Return to Proxycon on the highest stable OC I was able to run on air to 6-7. This is at the point in the test where the scene moves to the defenders. I backed both the core and mem down to stock and it was fine. After a while I found that any speeds higher than I listed in the table caused the same slowdown. I know it wasn’t over-thermal due to logging with Rivatuner 2.0 RC16.2 which is how I knew that the core was at 56*C. 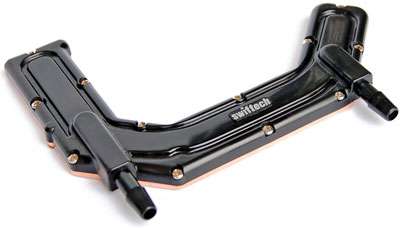 I don’t know what caused that but I know that moving to water cooling removed that obstacle and I’m fairly convinced that had I gone with ramsinks I’d have seen the same ram clocks but the core would’ve still improved. The slowdown happened on the ram above 735Mhz no matter the GPU clock, it was just freaky. I do know that I haven’t hit the wall on the OC yet, I’m still working on it, I’ve just hit the point where I want to live with the system a while to get used to any quirks it may have.

At nearly $60 MSRP the MCW-Ramcool is an easy to stomach alternative to the full card blocks as an upgrade path if you have a GPU block already that is. If not the cost is a bit high and could be a stumbling block to its success. No it doesn’t cool the PWM circuitry on the uber cards but I think that with good air flow around your cards that it’s not an issue. Most of the heat has been removed from the air in that area so the PWM section of those cards will be getting all cool air.

Overall though I’m very impressed, I never dreamed that watercooling my Vram would make such a difference to the tweakability of my vidcard but I have to say, I’m sorry I didn’t try this sooner. I’m awarding the MCW Ramcool an 9/10 along with our Editors Choice award!