by Jamie Fletcher on May 4, 2016 in Networking, Storage

Network Attached Storage is something that all of us want at some point, and Synology has be providing many options for it over the years. Under review today is the DS216+, one of the first generation NAS units to feature Btrfs and Snapshot support with 4K video Transcoding. We take a look at media support, some of the business features, and what’s new with DSM 6.0.

As mentioned earlier in the review, the DS216+, much like the DS716+, has hardware support for 4K video transcoding down to 1080p. There are a couple of limitations with this that need to be mentioned, and the big one is that it’s limited to H.264 compatible formats only. The newer codec, H.265 can not be transcoded in hardware with these particular NASes, but instead relies on the software transcoder. For hardware acceleration of H.265, you will need to get the DS216play.

There are three main media servers for Synology, Media Server is Synology’s DLNA compatible network media broadcaster, and works as a simple interface for other applications to link to for direct streaming. Video Station works as the media server on the NAS, and is Synology’s equivalent of Kodi or Plex, allowing for not just streaming, but indexing and as a transcoder for mobile devices that can not support full resolution files. Plex is a third-party home theatre and media server that’s very popular, and can be installed manually from its website.

If you already have some investment into the Plex platform, it’s worth sticking with it if you can, as it provides a broad range of connectivity options for TVs, mobiles, tablets and media sticks like Roku and Chromecast. The main difference between Synology’s Video Station and Plex comes down to the transcoder – at this time, Plex can not access the hardware transcoder on the DS216+, and fully relies on the software decoder of the CPU (at least through our testing).

To test this out, we uploaded a 4K H.264 video to the NAS and then streamed it from a tablet, in this case a 2nd Gen Nexus 7. You need to download DS Video first in order to access the NAS and use the transcoder (however, if the device can support the format natively, this is not required). DS Video can link to any other media player on the tablet, and Synology even recommends people use MX player, as it allows for a broad range of video formats and additional hardware acceleration on the device. 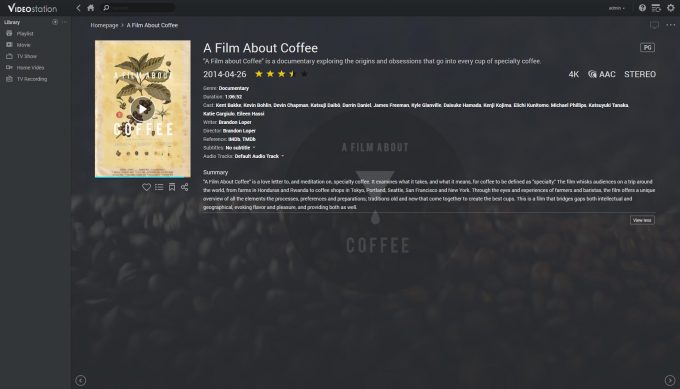 When playing back the 4K video through DS Video on the tablet, there is a slight delay as it caches, but otherwise works flawlessly. MX player helped keep things smooth with additional acceleration on the tablet. Checking the NAS resource manager, we saw that only 20-30% of the CPU was used for transcoding the 4K video. Image quality was obviously inferior, with noticeable banding in gradients, and fast motion sometimes cause macro-blocking in areas, but otherwise perfectly acceptable on a 7-inch screen.

We tried an H.265 based video, but this would stutter frequently as neither the tablet nor the NAS could decode or transcode fast enough with just software. We switched over to Plex for the next test, with both Plex as the server on the NAS and the Plex player on the tablet. It was not too surprising, but 4K videos was a definitive no-go. The resource manager was pegged at 98-100% and only a second or two would play, with the player reporting the CPU wasn’t powerful enough. Users may have better luck with the quad-core DS716+, but this is unlikely – 4K requires some serious horsepower.

Testing a NAS these days has become simpler, but also stagnant. Many of the older tests like NASPT haven’t been updated in a long time and are no long compatible with modern systems, and simple file transfers are largely limited by a single issue, Gigabit Ethernet. More often than not, the hard drives in a NAS are faster than the network they are connected to, and when you add RAID as well, then the Ethernet becomes the main bottleneck. It’s only really slow disk controllers and overloaded CPUs that are likely to have an issue or slow transfer speeds.

However, we do perform the usual bouts of file copies, and to help with that, we tend to use iSCSI so that we can use hard drive testing applications. In this case, CrystalDiskMark. Because we are dealing with not just two different RAID types, but also two different file system, we thought we’d check to see if Btrfs makes a difference to performance (spoiler: it doesn’t). For testing, we used two 4TB WD Red hard drives, the kind suitable for a NAS. For your own drives, any of the WD Red or Gold series will do, otherwise Seagate NAS range is just as suitable.

Don’t read too much into the 4KB results, as it’s likely there is some caching going on, causing the write speeds to be slightly higher. The differences between RAID 1 and 0 are pretty much nil, and as far as Btrfs and EXT4, the difference is so small, it’s barely worth mentioning (slightly better 4KB results in favor of EXT4). In all likelihood, we would need to use SSDs to see any major difference (defeating the point of a NAS), and over dual or quad gigabit with link aggregation. Needless to say, it makes no difference with hard drives whether you use RAID 1 or 0 with either Btrfs or EXT4.

When compared to other NASes, the results are pretty much maxed-out for a single NIC solution. The HDD will limit small file performance due to high access times, and the network interface will limit the total bandwidth available. A standard HDD will normally transfer around 150-175MB/s at peak, and a 1Gbps Ethernet connection equates to about 125MB/s; when you factor in overhead, 110-120MB/s is all you will ever get. The DS216+ is slightly faster than the previously reviewed DS715 in sequential, and it’s slower in some of the 4KB tests, but we’re talking about 1-2MB/s at most across all results. 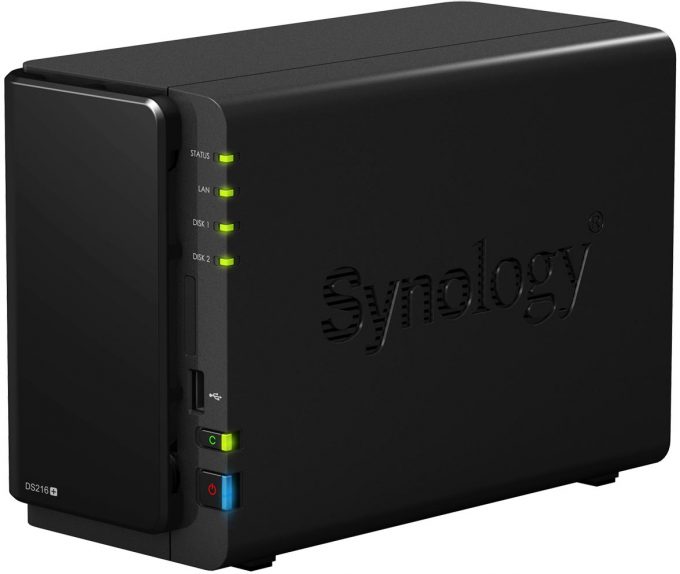 Raw file performance is only half of what makes a decent NAS, the rest of it is down to the features. Btrfs plus snapshots, the inclusion of some business features like certificate management through Let’s Encrypt, LDAP support, setting up your own DHCP server, the various web server plugins for either websites power by common CMSes, GIT, SVN, access and user privileges, Docker support… It just goes on and on.

For $300, Synology’s DS216+ is very good value for money when you factor in all the extra features, and it’s worth paying the extra $30 over the ARM-based DS216. However, if you are in need of H.265 transcoding, your only option is the DS216play. The much more expensive $450 DS716+ certainly has a lot more processing power, plus the optional expansion bay, but for core features, it might not be worth it. If you are looking for a good all-round 2-bay NAS, the DS216+ is very hard to beat, and as such, thoroughly recommended.