Do you hoard digital media? Do you wish your unsupported files played on a media device of your choice? Do you need a central location for storing all files? These three scenarios point to an attractive solution: Synology’s DS415play NAS. Whether for work or for play, this user-friendly NAS has something for everyone.

For testing, we configured the DS415play for JBOD, RAID 0, RAID 5, and SHR with 1 disk allowed for redundancy, and then chose two files to copy over with each configuration.  The first is a 10GB compressed archive that acts as a solid file to test sustained write speed, and the second is a 10GB folder containing 5,730 files of varying sizes.  Copying multiple small files can really bog down a drive, so this will tell us how well it can handle this type of commonplace transfer.

Our test system uses an Intel Gigabit LAN connected to a standard 1Gb/s router. To ensure the results are as accurate as possible and not affected by a large amount of RAM, only 2GB was installed prior to testing. As mentioned earlier, the NAS is loaded with identical Seagate ST4000VN000 4TB drives, and cat 5 cables were used to connect the PC and NAS to the router. Each test was run twice by transferring files from a solid-state drive to the NAS with the results added together and divided by two in order to find the average write speeds.

The numbers across the board are pretty much what we expected as RAID 0 takes the performance crown, but at the expense of redundancy. It was nice to see Synology’s SHR keep pace with RAID 5 since it offers everything the latter does, but with none of the storage drawbacks of a traditional RAID setup.

That brings us to what I personally find to be the coolest feature of the “play” models: video transcoding.  Even though this series is geared toward media storage, 1080p transcoding performed on the NAS itself really takes things to the next level. Video transcoding means that a file is converted from one type to another, and then sent to the device requesting the file. Different media types are supported with different media devices, so check out the information on Synology’s site for more details.

Through the Video Station application we added a .mkv file to the library and enabled transcoding. This file type isn’t supported by Windows Media Player, but with the NAS performing all of the heavy lifting, the file played flawlessly with no audio syncing issues, even when jumping around to various points. I’m not a videophile, so comparing the transcoded quality in Windows Media Player on the left, to the local copy playing in VLC Media Player on the right, which features native .mkv support, is virtually impossible for me. 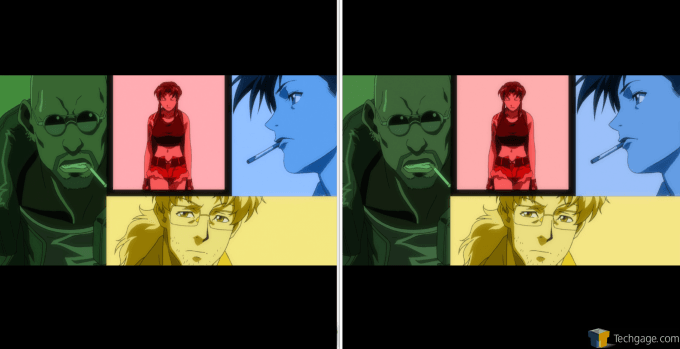 To further test this feature we installed a media player without native .mkv support (which was a task in itself!) on a Google Nexus 5 running Lollipop 5.1.1, and it also played. This time around, however, the beginning of the file stuttered and didn’t advance, but jumping ahead a few seconds somehow seemed to fix the problem.  With that said, playing the file seemed to be hit or miss. A desktop system running Windows 8.1 had no problem playing the transcoded file as seen above, but an HTPC running Windows 7 just spun its wheels without ever opening it.

We also wanted to test transcoded playback using a smart TV, but for whatever reason the WiFi signal simply would not stay strong enough to allow for a smooth frame rate, so in the interest of getting this review out in a timely fashion, we decided to conclude our testing and move on.

It’s pretty amazing to think about how far we’ve come with regards to pictures, music, and videos in general, but even more so when you stop to think about how we’re converting them from a format that may only last decades into something that could potentially last for centuries without any degradation to quality.

The downside to this is that we need somewhere to store all of this fresh, digitized media, but as is the trend with all technology, more and more options are available for less and less money.  This doesn’t mean that getting into the NAS game is going to be cheap, regardless of the manufacturer and model.  Picking up the DS415play will set you back around $500, and you’re looking at almost another $600 to fill it with the same 4TB drives that were included in our review sample.  Those figures alone might make some write off a NAS and pick up a simple external drive, but the two just can’t be compared. 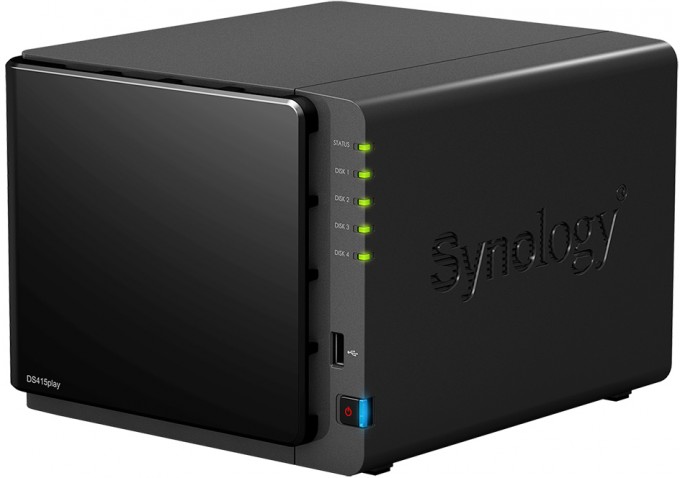 In the case of the DS415play, you get a well-built NAS that packs some pretty powerful hardware and has one of the cleanest, user-friendly interfaces around.  It’s easy enough to set up as a home media server, but has enough network and security features to help it fit into an enterprise environment if needed.  The multitude of RAID configurations also provides the added flexibility to allow for some redundancy should a drive fail.

What do you get with an external drive?  Well, it’s cheap.  That’s something, right? Right?

While this may not be an issue for home users, the fact that the front panel simply pulls off does not provide much physical security, although the lock slot on the back means that the entire system won’t be carted off without some effort.  It’s probably best if this little fella is locked away in a server room just to be safe.  This might sound like common sense, but you’d be surprised where some companies leave their storage devices laying about.

What might become an issue is that the front USB port is only 2.0, meaning it can transfer at speeds up to 480Mbps.  It would have been nice to see the front port bumped up to 3.0 to take full advantage of the increased speed that the interface affords.  Another nice feature to see included would be direct transfer that copies an entire flash drive over to the NAS at the touch of a button, as some other Synology NASes have, but we don’t feel this is a game breaker.

If you’re in the market for a full-featured NAS that can transcode video to multiple media devices at once, then the DS415play is worth some serious consideration.

The Synology DS415play is available from Amazon and Newegg (currently ~$500).