by Robert Tanner on August 7, 2018 in Networking, Storage

Storing data is easy, but storing data reliably is a fair bit harder to pull off. Sure, RAID protects against a disk failure, but is not a safe backup solution in of itself, nor does RAID offer protection against data corruption. Synology’s DS1618+ solves this by offering a combined Btrfs & RAID solution in a 6-bay NAS that can be upgraded to meet practically any home or business need.

There are few universal constants in this world, such as the speed of light or that time marches ever onwards. Another would be that there is always an ever-increasing need for additional data storage!

Whether it is space for a growing collection of purchased music and movies, photo albums of family and friends, reliable data storage, collaborative network shares for a business, or simply a unified backup system for personal devices, we can safely say the need for storage is as inescapable as E=MC2.

One quick and easy solution to the problem is to add a Network Attached Storage device (NAS), a centralized self-contained miniature computer system dedicated foremost to long-term storage, convenient access, and most importantly, protection of massive amounts of data. For this review we will be taking a look at the options and features of Synology’s newly launched DS1618+, a six-bay performance NAS designed for HDDs, SSDs, and a plethora of upgrade options to meet almost any need; from the personal data hoarder, to small & medium businesses with large data storage requirements.

Synology is a major player in the NAS market, and the DS1618+ marks its first NAS to upgrade to the 3000-generation of Intel Atom SoCs. These newer chips are die shrunk from 22nm to 14nm, yet maintain the same 15W TDP, offering substantially improved performance (partly due to four times the L2 cache), a bandwidth upgrade from PCIe 2.0 to PCIe 3.0 for the internal x8 slot, and finally an upgrade to DDR4 dual-channel memory; quite a step up from the 2000-Series Atoms. 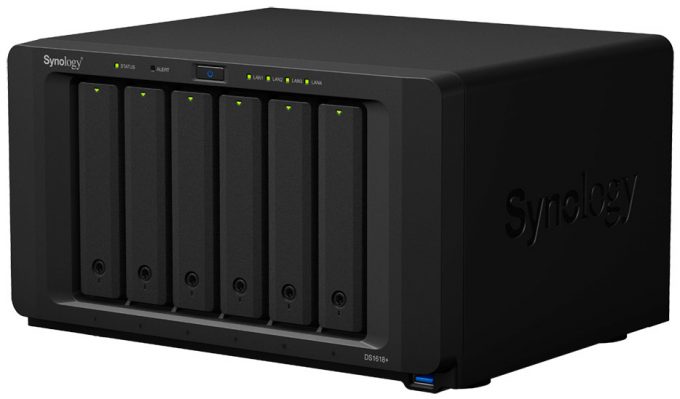 The DS1618+ is a six-bay NAS, featuring a quad-core 2.1GHz C3538 Atom processor, 4GB of DDR4 2133MHz RAM, a PCIe 3.0 x8 expansion slot (which we must clarify remains x4 electrical), and a plethora of expansion options to meet a variety of customer needs. The NAS ships with a single non-ECC 4GB module installed that can be optionally replaced with ECC memory. Users looking for 10GbE support can add it via one of Synology’s 10GbE add-in PCIe cards, or even Intel’s older X520 & X540 series 10GbE NICs.

While the NAS supports the use of SSDs (including RAID F1 for all-flash arrays) in the main bays, Synology offers yet another add-in card purely for those that need SSD caching. The M2D17 is a two-slot PCIe card designed to run a pair of SATA M.2 drives in RAID 0 as a fast-cache (A single drive provides read cache, but two drives are required for write caching). If future storage expansion will be required the DS1618 can be linked to a pair of Synology DX517 expansion bay units via its two eSATA ports bringing the maximum potential drive capacity to a whopping 16 drives.

That isn’t all, the DS1618+ comes with built-in support for WiFi adapters via the USB 3.0 ports, gigabit link aggregation & failover support for redundancy purposes, and for security offers anti-virus, firewall, and security intrusion prevention software baked in. Plex, Btrfs, and a range of certified virtualization options are on offer. To say the DS1618+ is a powerhouse of a NAS designed to meet the needs of even small & medium businesses is an understatement. It still feels like we are barely scratching the surface, as such the entire list of specifications & features can be found here.

Btrfs is a new generation of file system, if we can still call it “new” for being nearly a decade old! Colloquially known as “Butter FS” or “butter fuss” it is technically a sixth generation file system and is similar in many respects to ZFS.

The advantages to Btrfs are numerous, but of most benefit is its ability to detect file, file tree, and metadata corruption. Btrfs creates a mirror of file metadata and includes a checksum that will be checked during file access, if the checksum doesn’t match it will know file corruption has occurred and can replace the metadata with the known good mirror. This unfortunately can’t fix the actual corrupted data and only safeguards the file system and metadata. The secret ingredient in the butter fuss sauce is that in conjunction with RAID parity, Btrfs is capable of going one step further. After detecting file corruption it can automatically repair the damaged data using RAID parity without the user ever having to take action.

So isn’t that what RAID is supposed to do anyway – you might ask? Actually, it doesn’t. RAID protects against drive failure by striping data across multiple disks, but it cannot provide insurance against data corruption, such as with bit rot. As just one example the cloud data service NetApp monitored  more than 1.5 million HDDs over a 41 month period and found more than 400,000 instances of silent data corruption.

That was in a data center environment, in a home or office environment additional concerns such as power outages, hard resets, viruses, and still others are increased risk factors. Not just hardware errors at the disk and/or RAID controller level can cause silent corruption of data being written to a RAID array. Btrfs when used in a RAID array (other than RAID 0, of course) provides additional protection against these and other sources of file corruption like bit rot. A fully configured DS1618+ can store 192TB of data (soon a quarter of a petabyte when 14TB drives launch later this year!), so utilizing a sixth generation file system such as Btrfs or ZFS is more important than ever for safeguarding data stored on a NAS.

Before going further, it is worth noting Synology is well aware of the parity issue with running “Btrfs RAID” in RAID 5 /6 arrays. Synology avoids the issue entire by simply not using the “Btrfs RAID” layer, so even if a Btrfs volume is in use in a RAID 5 array, DiskStation Manager will continue to use the traditional Linux LVM RAID layer underneath. Synology’s diagram and explanation will help make this more clear, but suffice to say the end-user will not need to worry about this when creating RAID arrays utilizing Btrfs filesystems.

Btrfs is a Copy-on-Write filesystem that offers increased functionality in other areas as well, such as quotas for shared folders, shared folder cloning, decreased space usage with file versioning, deduplication, and now with DSM 6.2 allows for near real-time snapshot capability of a disk volume. Snapshots of the underlying volume take into account journaling, allowing databases or virtual machine volumes to be restored from the snapshot backup without leaving them in an inconsistent state. Those looking for an in-depth primer on Btrfs should start here.

The DS1618+ ships in a surprisingly large box, and in tandem with a proper shipping box will be well-protected from the vast majority of shipping issues imaginable. I have seen full, heavy desktops and empty cases both shipped with less protection, so it is great to see Synology paying extra attention to such details. 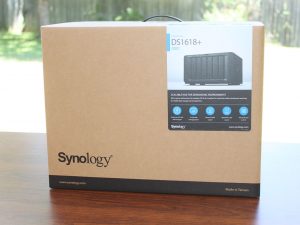 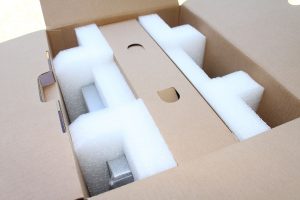 The box of accessories includes mounting screws (only needed for 2.5” drives), a pair of cat5e cables, power cord, and two keys for “locking” the drive bay latches. A quick install guide is included showing how to mount and install the drives into the trays.

Something that only became apparent when taking photos with a flash is that the outside housing of the unit came fresh from the factory with a slight coating of white dust, judging by the patterning likely deposited via hard water during a cleaning process. It is nothing a quick wipe with a cloth won’t clear off. 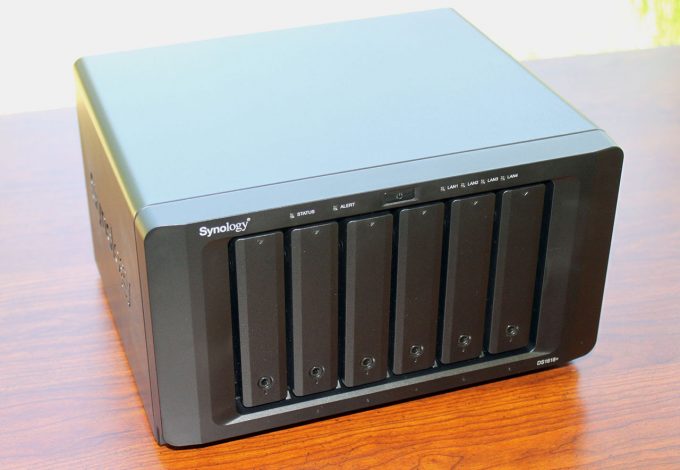 The front of the DS1618+ offers a sedate, clean plastic façade, with separate status and alert LEDs, though the hidden drive LED indicators become apparent after the unit is powered up for the first time. There is also a hidden USB 3 port to be found tucked into the lower-right corner of the front bezel. Sufficient space is left between drives to allow for proper airflow, and the internal layout ensures nearly all airflow is drawn in through the front of the unit to keep the hard drives cool. As a nice bonus, the brightness of all front LEDs can be adjusted by three levels or disabled entirely from within the DSM interface. 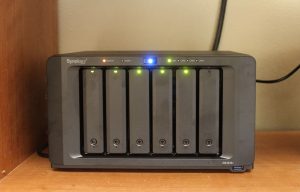 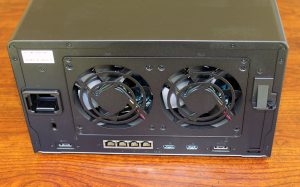 On the back of the unit are four gigabit ports, two eSATA ports for connection expansion units, two USB 3 ports, a system reset switch, and the single slot cover for a PCIe card upgrade. The four gigabit ports can support either Link Aggregation or Failover capability. The two 92mm exhaust fans are attached to a removable plate that allows a user to replace or clean the fans without actually opening the entire unit to do so. We should note that the housing and rear panel are metal, only the front bezel and drive trays are made of plastic.

The drive trays are plastic with a toolless mounting system and utilize rubber grommets to dampen drive vibration. The provided screws will only need to be used if planning to install 2.5” drives in the trays. The hex-shaped keyport on the front of the tray latch will “lock” the latch in place. These will protect the bays from loosely supervised children deciding to unplug drives to see what is inside, but to be clear this will provide no security from adults or employees wishing to abscond with a hard drive or five. Admittedly at that point it would be easier to just carry off the whole unit than an armful of drives, but I digress. 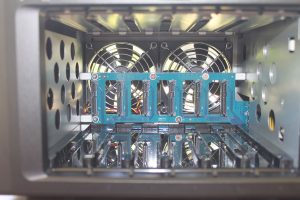 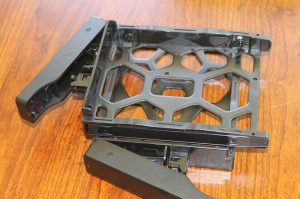 To mount drives one simply has to follow the quick install guide and pop the sides off the trays and snap them in place. At first I was a little dubious of how solid the mounting would be, but the mounting process compresses the drives securely in the rubber grommets. Once installed and locked into place within the NAS, there is no movement of the hard drive trays. 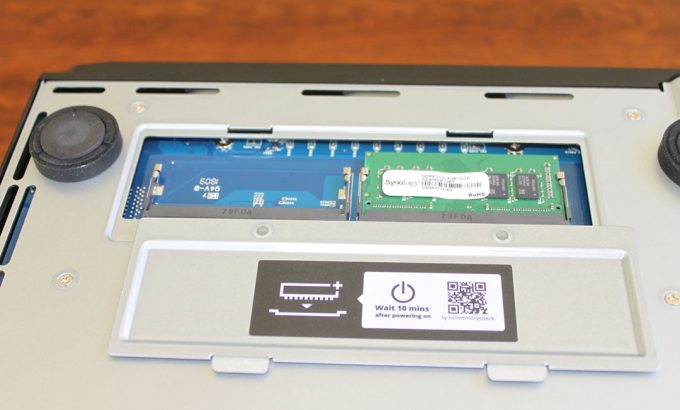 Under the unit is a removable panel for easy access to the DDR4 SODIMM slots. The DS1681+ ships with a single 4GB 2133MHz non-ECC CL15 module preinstalled, which makes it cheap and convenient for users to add a second 4GB SODIMM and double the RAM capacity to 8GB. Or, depending on need the unit can instead be upgraded with a pair of ECC SODIMM with up to a 32GB capacity supported 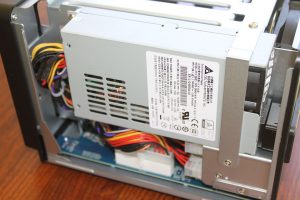 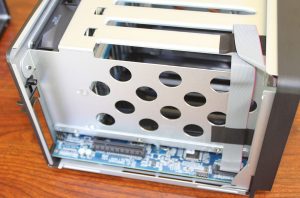 Instead of an external power brick the DS1618+ utilizes a server-grade Delta Electronics PSU with a max output rating of 250W. Both the PSU and rear exhaust fans are comfortably inaudible at default settings. Oddly the PSU does not have vents on the back of the unit and there is no clear exhaust path. This has the secondary effect that the NAS cover will need to be opened for access to the PSU when clearing the PSU itself of dust accumulation