by Greg King on September 4, 2013 in Networking, Storage

Our testing procedures have been documented in past reviews, but to recap, here is our process.

A few years ago, Intel created its own benchmarking tool for NAS devices called NASPT. Short for NAS Performance Toolkit, NASPT is, to quote Intel itself, “a file system exerciser and analysis tool designed to enable direct measurement of home network attached storage (NAS) performance.” Essentially what it did was create a tool that mimics day-to-day workloads such as video playback, content creation and office productivity application emulation.

By creating this tool, Intel has made it extremely easy on those of us tasked with benchmarking NAS devices. You install NASPT on a host machine (recommended specs are 32-bit XP SP2 and 2GB of RAM), map a drive on that host that points to the NAS and decide on which tests to run. These are the specs that I used when building our test machine.

Our testbed is a simple, everyday machine that I happened to pick up cheap on Craigslist. It’s a very capable PC and one that works perfectly for the NASPT test.

An additional test that we are using in this review is a simple file copy to the DS213+ and then from the DS213+.  Using the Windows utility Robocopy, a 4GB file is transferred to the DS213+and then back to the local machine after a reboot of the host machine.  This test is run three times, with the read and write times recorded and averaged out.

The numbers speak for themselves: The DS213+ is the new reigning champ for performance.  It’s easily the fastest NAS box I have ever tested and a quick look online shows that it’s currently selling for around $385 USD.  While not cheap, there is a lot of performance to be had for that asking price.  Compared to past units we have reviewed, there really isn’t any comparison.

That being said, we are working to get other units in for review, 4 bay boxes included.  Obviously, performance is going to increase with each new hardware refresh a manufacturer does.  With Synology, or anyone really, this is to be expected.  Where Synology truly shines is with its firmware.  Having used Synology devices in my test lab and at home on my network, I have never had a major issue with that software.  While the hardware is robust, the options offered to the community at large are breathtaking.  This is honestly something that other NAS vendors can take a look at because the modular design of Synology’s firmware has been the future for a few years now.  By adding particular add-ons, such as Squeeze Center or Plex*, you can transform your NAS box from a simple dumb backup destination on your network into a robust server that works for you.

*Plex is available, but in my experience, is not recommended for those NAS boxes that don’t come with an Intel Atom CPU installed. 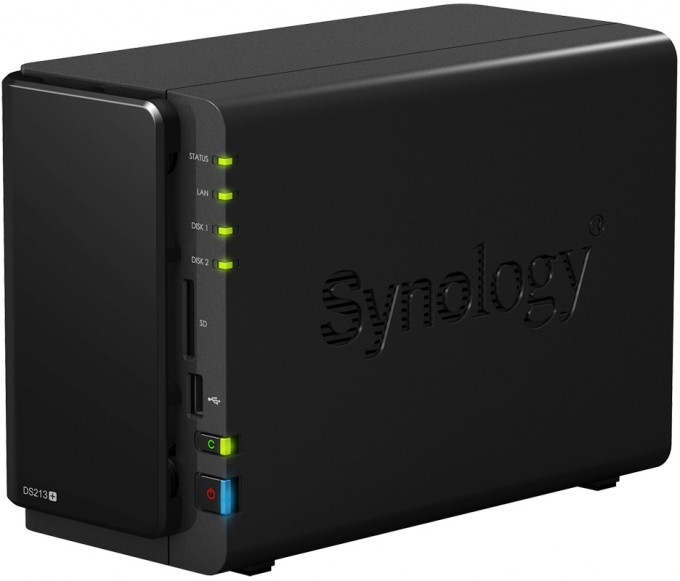 While Synology lacks the external finish of say, a NETGEAR ReadyNAS and its metal design, it more than makes up for it with features.  The developers at Synology seem to outdo themselves with each subsequent release of their firmware.  Add in the ability to share iSCSI LUNs and shares over NFS, the nod towards Synology when looking for a new NAS is made that much easier.

The DS213+ is fast.  It’s also expensive.  For the price, you are flirting with the lower end of the 4 bay NAS price range.  You sacrifice performance for additional storage and redundancy, but for many, that will be an easy call.  For me, I personally like the idea of presenting part, or all, of your Synology storage to a VMware host and using it for a shared datastore.  Again, the options are great with a NAS like this.

Simply put: Anyone looking for a fast, high performing NAS should so themselves a solid and check out the DS213+ from Synology.