by Greg King on October 9, 2007 in Networking, Storage

Looking for a single-drive NAS box that’s feature-packed and looks good? Synology’s DS107e delivers. Though not inexpensive, Synology delivered one of the most solid NAS boxes to cross our desk, which is packed with functionality and also proves to be one of the best looking units on the market.

Techgage has been around for just over two and a half years. In that time, we have just about covered the entire technology spectrum. This editorâ€™s personal favorites, as far as evaluation enjoyment, have been networking gear. With that said, this past August, we looked at the Synology DS207 dual drive NAS box.

If anyone has been busy reloading their product lineup over the past year or so, itâ€™s been Synology. 2007 has seen a completely new design to the Disk and Cube stations, as well as an aggressive push into the minds of anyone in the market for a new NAS with continual firmware releases, each bringing more and more functionality to the Synology devices.

Personally being one for security, I prefer some form of redundancy when it comes to data storage. Most think of a RAID array when this subject comes up but for me, it only means that your data is stored in two separate locations. Obviously Synology is in the business of data storage and they clearly know that not everyone needs a RAIDable NAS box and for users like that, they offer their DS107 lineup of devices.

There are three members of the 107 family, the DS107, the DS107+ and the DS107e. The only differences between the three of these boxes are the processor speeds and onboard memory.

Out of the three boxes, we are working with the DS107e in this review. Marketed towards the small business and home users, Synology intends for this model to fit the needs of most users that fall into these two categories.

We were left quite impressed with the styling, performance and the usability of the DS207 back in August and we are hoping to see the DS107e have a similar outing in our tests. While it lacks the active directory functionality that we found useful on the DS207, this feature really isnâ€™t needed in a home environment. The added features we saw on the DS207 are here as well, including streaming internet radio through USB connected speakers.

Throughout this review, there will be a lot of similarities between the DS107e and the DS207. For anyone looking for a step by step installation walkthrough, please see our DS207 review as the differences between the two devices are so small, from a setup point of view, that we did not see a need to include them in this review once again.

From a packaging standpoint, the DS107e comes in a box similar to other Synology devices. Aside from a different color scheme, the outward appearance of the package differs little from the DS207 we looked at earlier. One thing we do appreciate is the inclusion of a handle. This makes carrying the box quite simple. 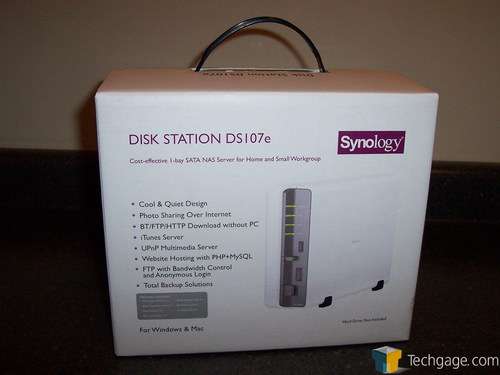 The sides of the package are full of information about the device, making sure to point out just what the NAS is capable of doing. In this case, exactly what the DS207 could do, and for that matter, most all of the Synology devices share the same core abilities, and there are a lot of them. More on that later though as we have a picture of a box to look at now. 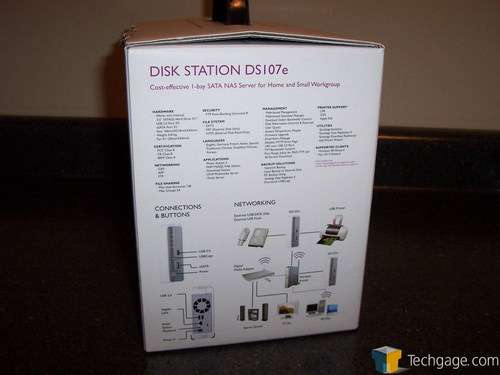 Upon taking the DS107e out of its packaging, we see that it is wrapped in a protective foam blanket. This is to further protect the device from scratches and bumps encountered in delivery. 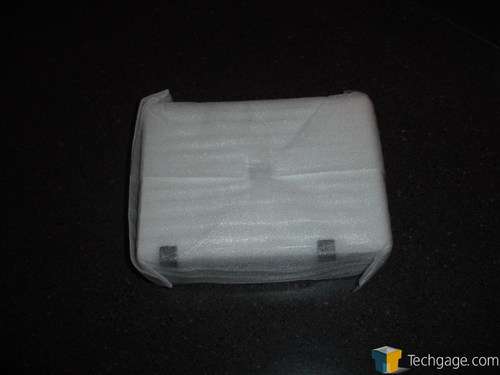 The packaging is far from being the important focus here, so let’s take a thorough look at the device itself next.