Synology has become well-known over the years for producing some of the highest-quality NAS boxes on the planet, some of which we’ve taken a look at in the past, and the new DS209+ is no exception. Though expensive, it has a huge feature-set and superb performance to back it up, which makes it a good buy for anyone with a fairly lenient budget.

Way back in August of 2007, we had our first look at a Synology NAS device. In our testing, we found the DS207 to not only perform well, but also offer a great amount of additional features that might help tip the purchasing decision of anyone who was in the market for a NAS storage solution. Since that time, we have followed the progression of the Disk Station brand closely, and with each passing year, Synology’s products grow in not only speed, but in features as well.

One of the most exciting features of the Disk Station brand is the time and effort the engineers at Synology put into each edition of their Manager OS. Up to v2.1 (beta until March of 2009), not only do their NAS boxes provide a fast and convenient way to store, serve and backup the data on your network but they also allow you to leverage their NAS many other ways. For example, you can host your own web site with the built in tools found in the DM software. You can host your own FTP site, setup scheduled downloads, use the NAS as a database server with its baked-in MySQL and also host a blog and share photos with anyone on the net by using their photo station.

Today we are looking at the Synology DS209+, a NAS box marketed towards small to medium sized businesses with the need for fast and reliable storage, and with a budget to accommodate those needs. Having worked with both the DS207 and the DS207+ in the past, I’m interested to see how well the new NAS will perform with its heavily-upgraded specs.

So what’s different? New on the DS209+ is a Freescale MPC8543 800 MHz CPU and 512 MB of DDR2-667 SODIMM RAM. The footprint of the device is exactly the same as other two bay models from Synology with the major aesthetic difference being a flat black exterior rather than the standard white that has been used to success in the past.

Arriving in standard packaging, the DS209+ was unharmed thanks to the secure orientation inside of the box. This too is a bit different from the other models that we’ve had a look at and the plain brown box is a welcome change in my personal opinion. 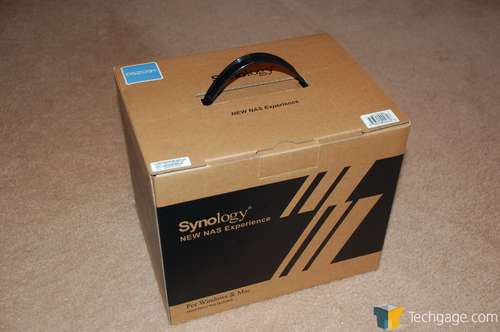 As with other Synology devices, the DS209+ ships with plenty of documentation and a setup disk that includes the Synology search program that will scan your network to find your device and allow you to easily set it up. Also included is a power brick, power cord and a short length of CAT5. 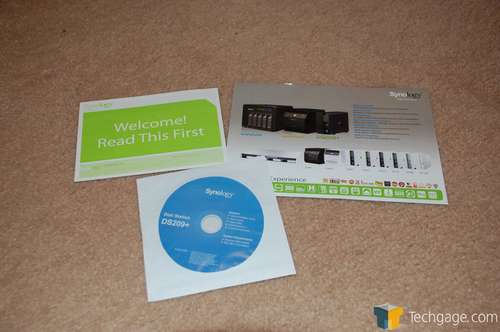 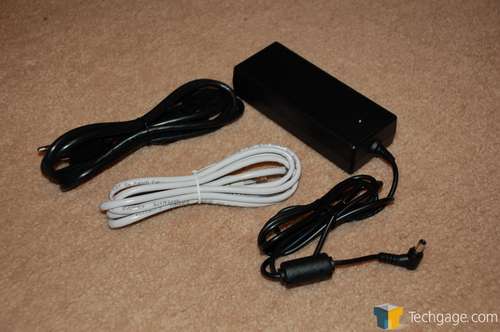 As we said earlier, the DS209+ is an all black NAS with the same dimensions as the other dual-drive devices offered by Synology. On the front, there are the same status lights, a power button, a single USB port for simple thumb drive backup, a backup button and an eSATA port for additional storage capacity. We set the DS207+ next to the DS209+ for no other reason than for a comparison. As you can see, they are externally different in color, except for the I/O panel on the front. 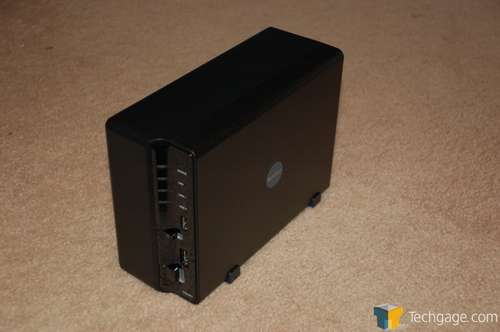 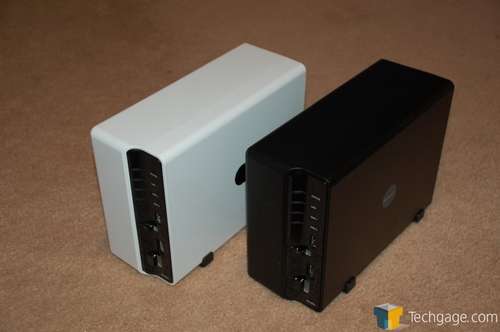 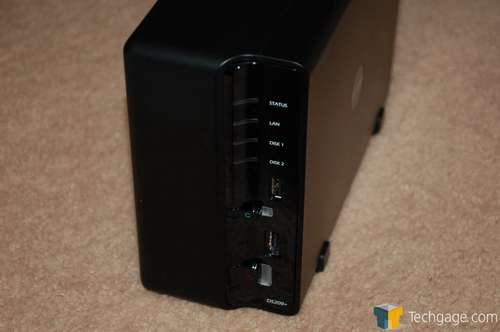 The back of DS209+ is arranged slightly different than its predecessor, the DS207+. There is a convex fan grill that keeps fingers away from the three-stage fan. Below the fan there is a pair of USB ports and a lone gigabit LAN port.

For those who are interested, the USB ports are controlled by a NEC D720102 host controller and the LAN is courtesy of a Marvell 88E8001 PCI gigabit Ethernet controller. Side by side, we see that the DS209+ has a larger fan which is a welcome sight as the DS207+, while not loud, is audible enough to be heard from across a room. 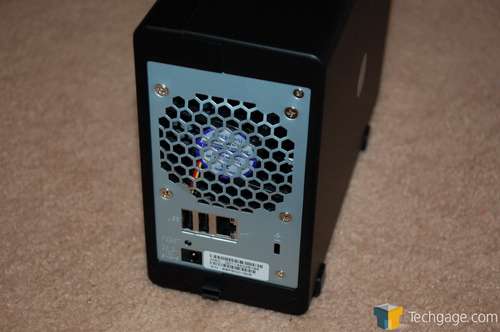 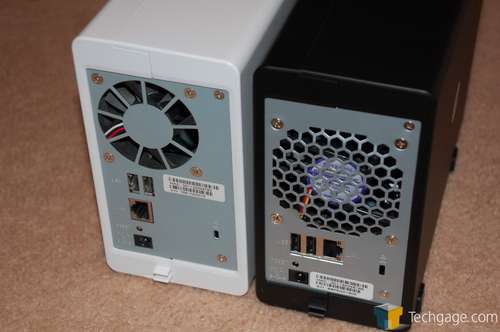 The bottom of the DS209+ is open at the front to allow cool air to be pulled into the NAS, channeled across the drives and expelled out the back of the enclosure. For stability, there are four large rubber feet. 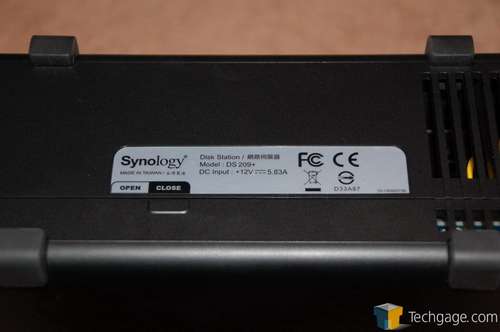 The DS209+ looks great on the outside, but how about the inside? On the following page, we’ll break it open and also take a look at Synology’s robust software package.