In the past, we have conducted straight file copies to and from the NAS devices. Using large single files and directories with thousands of smaller ones, we were able to get a real world idea of read and write speeds when averaging out multiple run. This has treated us well, and is a method still used by others, but going forward, we have a new tool in our belts.

A few years ago, Intel created its own benchmarking tool for NAS devices called NASPT. Short for NAS Performance Toolkit, NASPT is, to quote Intel themselves, â€œa file system exerciser and analysis tool designed to enable direct measurement of home network attached storage (NAS) performance.) Essentially what they did was create a tool that mimics day to day workloads such as video playback, content creation and office productivity application emulation.

By creating this tool, Intel has made it extremely easy on those of us tasked with benchmarking NAS devices. You install NASPT on a host machine (recommended specs are 32-bit XP SP2 and 2GB of RAM), map a drive on that host that points to the NAS and decide which tests you want to run. These are the specs that I used when building out our test machine.

Our test bed is a simple, everyday machine that I happened to pick up cheap on Craigslist. Itâ€™s a very capable PC and one that worked perfectly for the NASPT test. 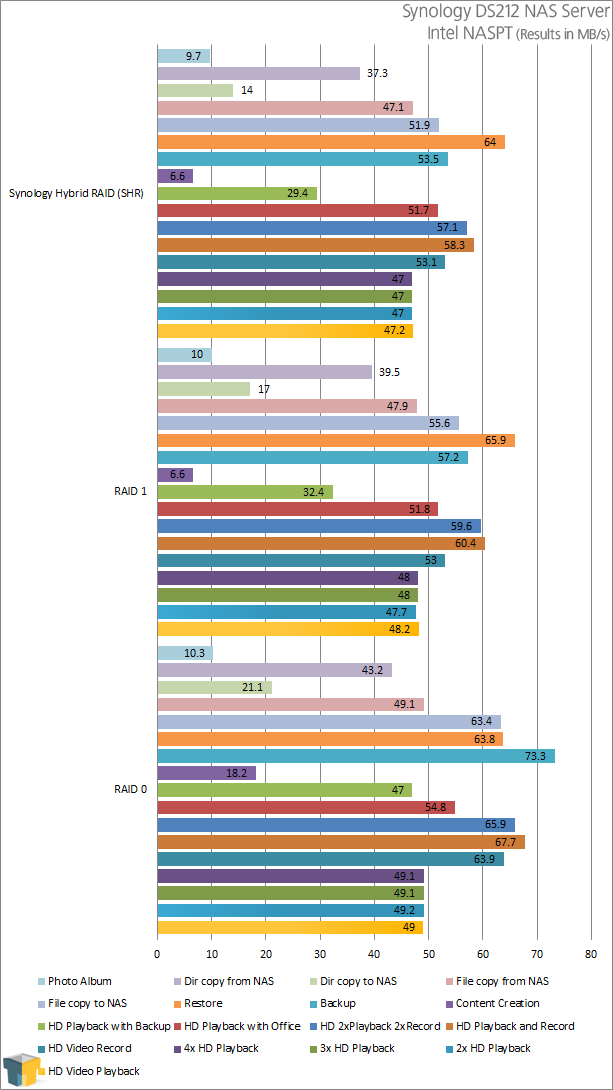 While Synology states that the DS212 delivers average read speeds of 110 MB/s, we simply did not see that. We got up to 73.3 MB/s in the backup test but thatâ€™s well short of 110 MB/s. Write speed however was surprising. We topped the advertised 54.3 MB/s when we saw 63.4 MB/s in the file copy to NAS test. It should be mentioned however that itâ€™s a bit unfair to compare our test results to those claimed by Synology. The company gives no example that I can find of how it came to those numbers.

Our speeds across the board were fastest when the DS212 was setup in RAID 0. This makes since given itâ€™s the fastest of the available RAIDs (0, 1 and SHR). For the purposes of this review, we decided to test Synology SHR. Since the D212 is dual drive NAS and we have disks of matching size, SHR is essentially RAID 1 but when those drives are of mismatching capacity and we have a capacity of more than 2 disks, SHR truly shines. The basic rundown is that it lets you use drives of various sizes to create a redundant array where as traditional RAID 1 achieves redundancy using drives with matching capacity. If you want to read more, please check out the SHR page at Synology.com.