Looking at the side of the TJ 1100 we see the table listing the rails along with the claimed sound output. Tagan claims a sound level of 28db at full load, I’m afraid that it’s a bit on the optimistic side. 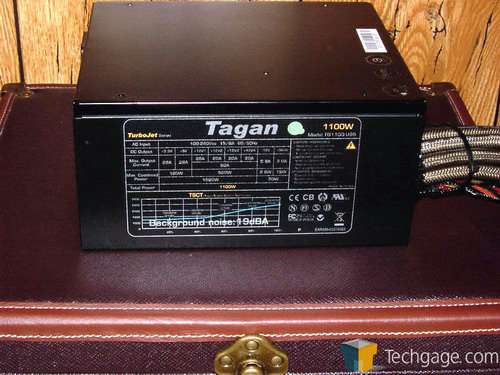 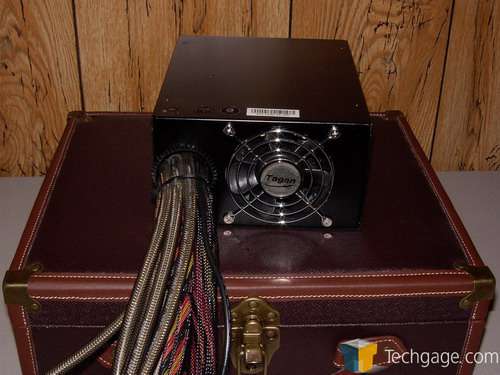 The front of the TJ 1100 has an 80mm X 25mm pusher fan. I think they use the thicker fan up front so that the unit muffles the sound at higher output. 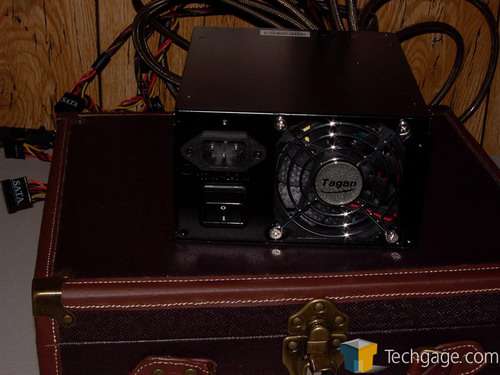 The rear of the unit has a unique 80mm X 15mm dimpled fan. The dimpling is supposed to help lower noise by preventing the wind from shearing off the fan blade. The dimples create a cushion of air over the moving fan blades and breaks up the boundary layer of air on them. 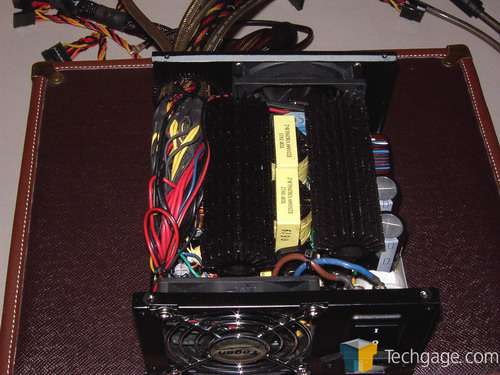 Opening up the unit reveals a pair of large hollow tubular extruded heatsinks. These are pretty unusual but should be very effective for keeping the unit from losing it’s composure at high loads. 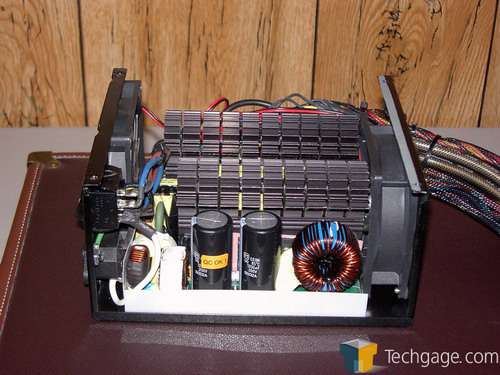 The primary side of the features a pair of 1200mFD 200V caps. I know, you’re thinking "Wait a tick, it’s supposed to be compatible with 220V input." Well, it is, if you run caps in series it cuts the total capacitance in half but doubles the working voltage. This allows for use of smaller diameter caps since the higher the voltage the larger the girth of the cap. It’s a design compromise that won’t have a negative effect on the overall circuit. 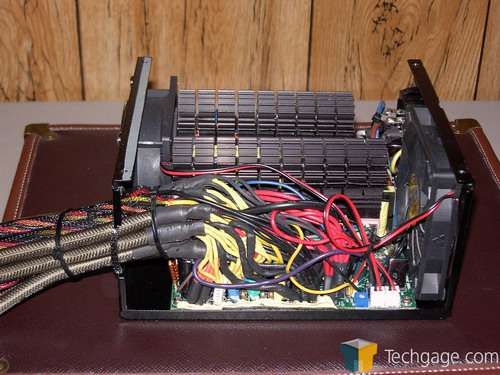 Looking at the secondary side of the TJ 1100 there’s not terribly much to see. The wiring blocks the view for all but a few components. There is a trim pot by the fan plugs but I suspect that with it’s proximity to the fan circuitry it is responsible for tuning the cooling in some fashion. It could use a bit better tuning but I’ll get into that in a minute. But first on to the numbers, shall we?

The voltages look really well and the efficiency numbers are far above what I was expecting. The ripple looked ok once I figured out a small issue. I’m sure you noticed that the voltage numbers were all the same on the 12V rails, the reason for this is that I had to run all four rails into an interface and tie all the rails together to make it compatible with my ATE. The side effect of this was ungodly ripple on the 12V rails, after a bit of experimenting I found it was from the rails being tied together.

Separately the ripple is at 40mV per rail at 17.5A load per rail. Not bad at all although I figure that all four rails loaded would be about 60mV. The 3.3Vand 5V rails were fine and never moved past 30mV under full load. Overall I’m rather impressed, especially due to the fact I read it’ll "never do 800W on the 12V rail" or something to that effect. It looks like someone was wrong.