Now, I mentioned the fan noise earlier. Tagan claims that the TJ 1100 puts out 28db at full load, I’d wager that the SM 268 is in the area of 50db when it’s cooling fan kicks in if not more. During test five the TJ 1100 was loud enough that it drowned the SM 268 out. The air coming from the PSU was at such velocity that I could feel it from over three feet away from the rear of the PSU.

Anyone familiar with 80mm fans knows that for you to get that kind of air flow from a fan that size means you’re going to be creating quite a bit of noise. I must say though that the dimpling on the rear fan must help as it didn’t have any sort of high pitched whine commonly associated with smaller fans at high flow levels. It just made the normal air rushing sound so that’s a bit of a plus. Under more normal operating conditions the sound was tolerable although still louder than units possessing 120mm and up fans. 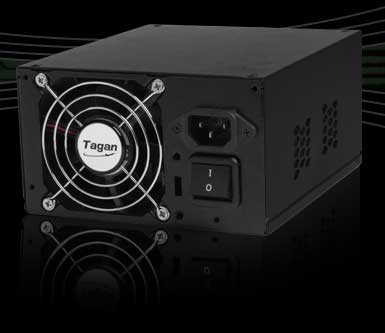 I’m not a huge fan of the plastic coated cables. They’re stiff and make trying to bundle the unused cables away in the case a total pain in the neck. I’d really like to see the plastic scrapped and a traditional sleeving used to make it a bit more user friendly. Aside from that the TJ 1100 is a pretty decent PSU and compared to it’s direct competition isn’t as unwieldy as some of the units out there. It’s only 7" long so it’s more likely to be a choice for users with smaller cases than some other models on the market today.

Time to sift through the chaff and see what we find.

The Tagan Turbo Jet TG 1100 U95 seems to be the perfect compliment for power hungry 8800GTX SLI systems but there are better choices out there. It’s not that I dislike the TJ 1100, it’s a decent unit but there are bigger negatives to it than there are positives. Yes, it held up under everything I could throw at it but it really dislikes having the 12V rails combined and with 8800GTX SLI you’re more likely to end up combining 12V3 and 12V4 than not since Tagan doesn’t list the rail separation in their manual. Most of us would assume that PCI-e 1 & 2 are on one rail and 3 & 4 are on another.

Wrong, in fact, the odd numbered PCI-e connectors are on rail 3 while the even numbered connectors are on rail 4. This means that due to the TJ 1100’s increasing ripple with the rails combined hooking up the PCI-e cards in what would seem to be a sensible manner could result in higher ripple going to your uber expensive graphics cards. Not good at all. The cables are another major sticking point for me.

I don’t like having a huge wad of stuff to hide away and face it, unless you’re building a super computer, you’re not going to use every cable coming out of this PSU. That means you have several thick, stiff cables to contend with and it makes it difficult to keep your PC neat with this honking big wad of cables that you can’t tuck away. Not to mention that making sharp bends is also a major issue. With that said I’m awarding the TG 1100 U95 a 6/10 and hoping that my complaints don’t fall on deaf ears.