With NVIDIA’s constant focus on the GPGPU side of things, it’s no surprise that it wants to beef up the capabilities for Fermi. You might imagine that such a focus would harm gaming performance, but it seems like the opposite is true. It’s not going to hurt gaming performance, but instead it will potentially add to the experience. That assumes that developers will take full advantage of it, of course, which I suspect they will in the near-future.

Things like PhysX are proprietary to NVIDIA, but there’s nothing from stopping the same kind of physics effects to be programmed in another similar language, such as Direct Compute or OpenCL. In sitting down with an NVIDIA employee after our deep-dive, he mentioned that he found it truly bizarre that no one raised the question of why NVIDIA isn’t porting PhysX to OpenCL. I replied that I figured the answer would have been to the sum of “It will never happen.” The employee then said that wasn’t entirely the case, but rather the real reason is simply that “no one is asking for it.”

I found that response to be interesting, and just how true it is, I’m not sure. I’d find it hard to believe that the majority of gamers wouldn’t want to see PhysX ported to something like OpenCL, because it would mean both cross-platform and cross-hardware (as in, ATI support) support. I also wondered, though, if “no one is asking for it” could be interpreted as “no one is finding PhysX to be that important”, though that’s certainly not the point this employee would want to get across. It’s all interesting, nonetheless.

Personally, I’ve long been a fan of PhysX, ever since the earliest days (we first interviewed AGEIA, which was since acquired by NVIDIA, nearly five years ago), and from what I saw during our deep dive, my interest hasn’t waned in the least. Would I still like to see PhysX available for non-NVIDIA cards? Of course, and to be honest, I feel like that has to happen at some point, but how it will is completely unknown to me. At this point, it’s just a waiting game.

That aside, NVIDIA helped prove that PhysX is still at the forefront of its focus with the help of a company-produced tech demo called “Supersonic Sled”. To help give a brief idea of the physics to be had in here, I’ve embedded a preview video provided to us by NVIDIA:

The company tried to use every PhysX trick in the book here, and while some of its techniques are a little unconventional, it wanted to prove just how versatile PhysX and its library of tools is. The primary focus of this demo is physics, so pretty much everything here was built with it in mind. The sled, which is designed after super-fast rocket sleds, is built from the ground-up with PhysX. The entire model of the sled itself, with its 200 pieces, are all PhysX-based. That means that each react just as they should when in action, an believe it or not, for the demo to even work, they have to be designed accurately. That’s just how realistic NVIDIA wanted this demo to be.

I mentioned the word “unconventional” earlier, and that’s because the character’s face is built using the cloth feature. NVIDIA took this route because the character’s face, when going at these ultra-high speeds, is supposed to get distorted, and that was made much easier when using the cloth feature. This is just one of the many examples where a game developer may look at a PhysX feature and not immediately think of a use for it. Just because a feature is called cloth doesn’t mean it can’t be used elsewhere, and the same can be said for the other features.

Unfortunately, NVIDIA is holding off on making its Supersonic Sled demo available until its GF100 launch, but I can say that after seeing it in person, it’s going to be worth the wait. The demo is simple overall, and it lasts only about 30 seconds, but there are many configuration options which are sure to keep you in the demo for an hour or more. As mentioned, the physics are so accurate here that every setting has to be appropriately set in order for a successful run. Bump one setting too high, and you may not even make it off the starting-line. 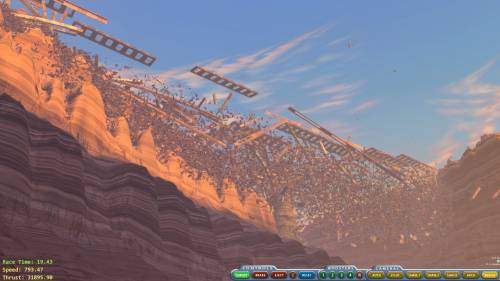 NVIDIA doesn’t show the entire demo in the video below, but past the small brittle building you see there, there’s a long wooden bridge. Storming across it at your high rate of speed pretty much obliterates it, and to me, this is one of the coolest PhysX effects I’ve seen to date. I am not sure if end-users will have access to the number of particles that can result from this, but I’m hoping so (NVIDIA enabled this feature in front of us with a secret menu), but by default, the bridge consists of 1500 large objects, which are handled by the CPU, and then 40,000 pieces of debris, which are handled by the GPU.

You might be interested to know that the CPU comes into the picture at all, but it’s true. The company stated that for some things, the CPU is a welcomed addition, as it allows for the best overall performance. The GPU will always be dedicated to handling the massive physics workloads though. In this case, the GPU is handling almost 27x as many objects. But that’s not exactly a limit, as NVIDIA cranked the number to 1,000,000, and it still ran fairly playable (on only a single GF100 card, as well).

In another example of where developers could use PhysX effects in unconventional ways, NVIDIA showed off the upcoming Capcom game “Dark Void”, and its use of the Turbulence feature. Here, the developers made use of the feature with the Disintegrator weapon in the game. It’s hard to explain, but after firing, it expels this watery blob of turbulence, and it looks absolutely fantastic. Also, the character in the game makes heavy use of a jet pack, and that again is made much more realistic looking with the use of PhysX. 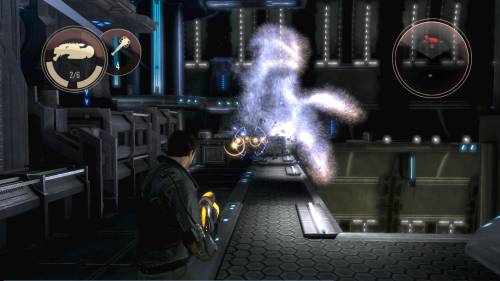 The game makes more use of physics than just these two, but NVIDIA didn’t exhaust them all. I have a copy of the game, however, and I plan to load it up soon in order to take a look for myself. From what I saw during the deep dive here, I’m glad to see that PhysX is alive and well, despite it meaning that we’re locked into NVIDIA hardware in order to experience it. If developers continue to adopt it, I really can’t see that fact intact forever.