The best part of being in Taiwan for Computex is that we’re so close to a huge number of companies that we deal with on a regular basis. As Kingston has a factory not too far outside of Taipei, Hsinchu to be exact, the company invited a group of journalists and industry friends to take a tour. We were there, and relay our experiences.

During our Computex trip, Kingston invited a bunch of media friends to its HQ in Hsinchu, Taiwan. This city is about an hour south of Taipei, and is home to many popular companies you’ve likely heard of, including TSMC (which has a massive (that cannot be understated enough) factory there), Realtek, D-Link, ProMOS, Logitech, Lite-On and others. But for the day, our job was to head to Kingston and see how things are run, and to gain a bit of understanding of how our flash media and DIMM modules are built from the ground-up.

First things first. One thing I noticed about Hsinchu, or at least the Science Park portion, is that it’s clean… much moreso than other parts of Taiwan I’ve seen. It’s no doubt for good reason, given that there are seemingly countless factories here that churn out new product without much of a break. But even outside the factories, there was no sight of litter, and all was very clean. It was refreshing.

As we entered Kingston’s building, we were greeted by an LCD screen that welcomed everyone who showed up. There are some names on the list of people who weren’t present, and a lack of names of others who ended up being there, but it was a nice touch nonetheless. After stepping through the initial doors, we were greeted to a large lobby with some Kingston products on display, and also visitor badges that we had to wear in order to enter the factory area. 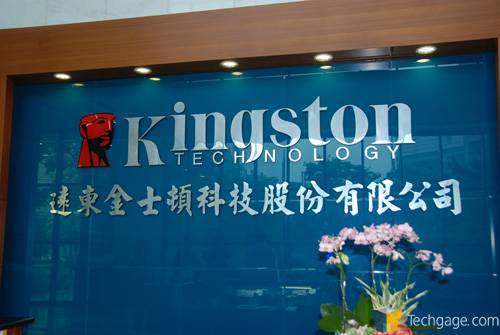 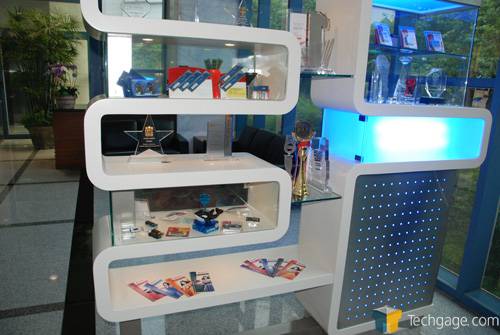 After passing through the security point, which required a swipe of our badges, we made our way up to floor 2 in order to get equipped with lab jackets and blue shoe dirt protectors. Those were little more than a hospital-grade thin cloth material that we wrapped around our shoes to prevent dirt from entering the factory. I am not sure of the jacket material, but the cloth wasn’t typical, and was slippery to the touch. I’d have to imagine that they are designed to not grab dirt before walking into the factory, and rather make sure that any dirt that hits you slides right off. 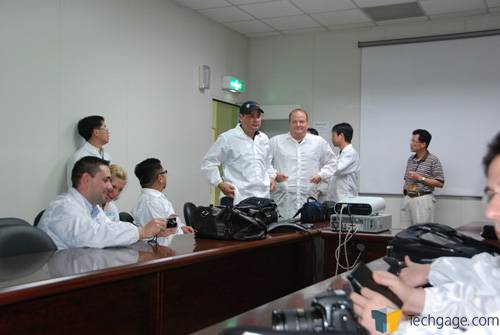 For the tour, our large group was split into three. Our particular tour guide didn’t allow us to take as many pictures as we would have liked (apparently the other tour guides were a little more accepting of pictures). Therefore, I don’t exactly remember the entire process, but I’ll recreate it as much as possible.

On the second floor, RAM modules get made. As we stepped in, we were immediately presented with multi-million dollar equipment that places memory ICs onto Kingston’s PCB boards. At first, these boards are large, and are cut later in the process into regular sized-modules. The modules we saw being built in particular were DDR3 mobile modules, so they were much smaller than a typical desktop module. Below, you can see some of the scraps that remained after the modules were cut. 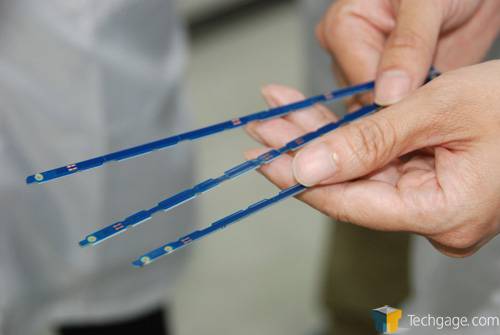 At the end of the second floor, you’ll have a completed RAM module, and from there, someone will gather and store all of them that the machine expels. Someone else will take the modules to an SPD machine, which is where all of the information, such as frequencies and timings, get copied onto them. Then it is off to the third floor, where all of the hardcore testing gets underway. A quick trip in a huge elevator brought us up there.