In the market for a new streaming device? What about an HTPC? Maybe a new gaming system? What if you could have all of those rolled into one? If I have your attention, then the NVIDIA Android Shield TV may be for you. Get ready for maximum couch time and maximum performance, but with minimum effort… and money!


A review of the SHIELD Android TV wouldn’t be complete without seeing how it stacks up against other SHIELD models, so we’ve run it through the same group of benchmarks to see just what the Tegra X1 processor is capable of. As we’ve stated already, the newest SHIELD has beefier specs, so we obviously expected big things.

Well, we certainly got what we expected, and then some. The SHIELD Android TV trounces all other SHIELD systems by a huge margin, but sometimes it’s hard to get a grasp on performance by simply looking at graphs and numbers. If that’s the case with you, take a peek at the GFX T-Rex onscreen test. It ran at 60FPS compared to 40FPS on the SHIELD Portable and 53FPS on the SHIELD Tablet. For those who want the best of the best in terms of video quality, the SHIELD Android TV delivers.

Yet again we see no change in the User Experience score of MobileXPRT, so it looks like that test is geared for lower-end systems. We found that navigating through the various menus was smooth and nearly instantaneous, as were Web searches and browsing various system folders and shared folders on the local network.

As mentioned earlier, the GRID service will scale down the stream quality based on the connection, so with the WiFi signal at roughly half strength we decided to take Dirt 3 for a spin.  Even though it was running at 540p at 30FPS, we found it virtually unplayable due to excess lag.  On our fibre connection with the WiFi signal at full strength using a typical 802.11n router or with the SHIELD connected directly, we experienced silky-smooth 1080p gameplay at 60FPS.  Despite the down scaling ability, those with slower connections or weak WiFi signals should ensure that the environment where the SHIELD will sit is ready to roll beforehand for the best possible experience.

As stated in the introduction, the SHIELD Android TV aims to do all things for all people.  Not only does it accomplish this, but it does so flawlessly.  I’m sure there are “power users” out there who could punch holes in this assessment since their needs differ from my own, but without getting too down and dirty, it’s hands down the best all-in-one gaming system/media player on the market today.

Voice search capability does away with any tedious on-screen keyboard work, playing downloaded games or streaming them through the GRID service is as simple as picking what you want and firing it up, and streaming movies online is as easy as it has ever been.  Navigation is fast and fluid, there’s more than enough horsepower for some eye-popping graphics thanks to the Tegra X1 processor, and the ability to stream flicks in 4K is fantastic, provided the service is available.

The hardware itself is well designed, with the SHIELD being much smaller and much thinner that I expected once out of the box, so it’ll be easy to tuck away if need be.  It’s also virtually silent, which is a huge plus in the living room.  I use an mATX system as my HTPC, so there’s always the slight sound of the fans running, but with the SHIELD, it’s dead quiet.

NVIDIA did a great job designing the peripherals as well.  The controller feels good in the hands and the buttons are well laid out resulting in no fatigue after long gaming sessions.  Perhaps my favourite peripheral is the remote control with its understated look and aluminum construction that makes it right at home in the living room and gives it a robust feel.  The microphone on both peripherals does a great job at picking up vocal commands, and the fact that they can be charged using the same cable reduces clutter, which is a top priority in my household. 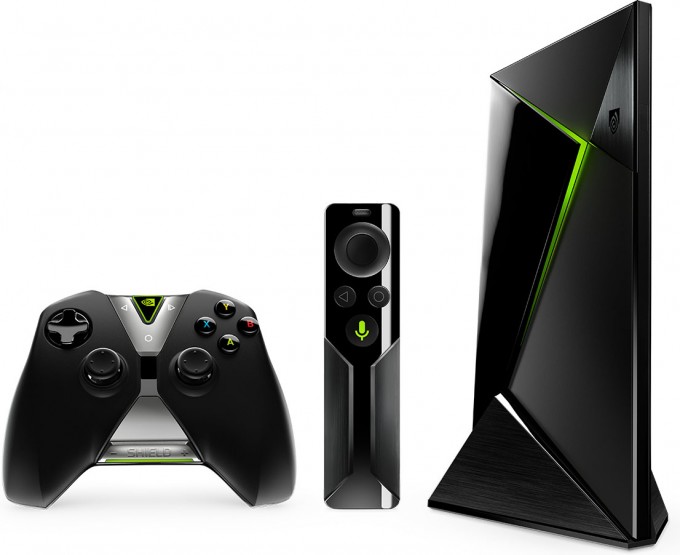 The list of games and apps available on Google Play is pretty thin given the massive amount of titles available at the mobile and desktop stores, and while you won’t find the latest titles on the GRID gaming service (yet?), there are some gems that you might have missed.  The service itself is a massive leap forward in what has been talked about for years, but never really delivered until now.  Who doesn’t want 1080p gaming at 60FPS, streamed to their TV virtually lag free?  I do, I do!

At $199.99 US, the 16GB SHIELD Android TV isn’t terribly hard on the wallet, but the lack of storage space may turn some folks off.  When you consider that a 500GB hard drive and USB 3.0 external enclosure would set you back around $65 US, the total price tag is still far less than the price of building a traditional HTPC that could match the SHIELD in terms of performance.  When it comes to the $299.99 500GB version, however, concerns about money are replaced by the simplicity of having everything contained in the unit itself and less clutter since no external drives should be needed.  We’ll let you decide which takes priority.

While the SHIELD comes with the controller, the remote will set you back $49.99 US, and if you want to to stand the system on its end, be prepared to dish out another $29.99 US for the aluminum base.

As it stands today, the SHIELD Android TV strikes me as a product with a specific niche although it covers a very broad spectrum within that niche.  Until the list of games can match that of the PC (which may never happen, but we certainly hope it does someday), I’ll personally will stick with my desktop system for games and a separate HTPC for media in the living room.  I feel that the freedom that a traditional PC provides trumps the simplicity of the SHIELD Android TV, but that’s just me.

For someone who has a specific need or want for a single system that does everything, the SHIELD Android TV is going to rock their world.