Ten KDE 4 Tricks Worth Knowing About

Since I discovered just how great KDE 4 is a couple of months ago, I’ve been using it full-time and am loving it. In all that time, I’ve discovered a few tips and tricks that I couldn’t live without, and all of them are listed here. Some of these include an inline CLI, split folders, setting up a media keyboard and using advanced wallpapers.

Up until a couple of months ago, I was a devout KDE 3.x user. KDE 4, despite being out since January 2008, never appealed to me for various reasons, and from comments I’ve read around the Web, I know that I was far from being alone. Compared to KDE 3.x, a lot of the customization was scaled back, and things were dumbed down, which is one of the main reasons I couldn’t ever stand to use GNOME. Plus, it also felt somewhat bloated, in all its Plasmarific glory.

My opinion changed back in October, though, when I decided to give 4.3 a try. Because my preferred distro, Gentoo Linux, posted that KDE 3.x would be removed from its Portage repository, I decided that the time was right to either get to like KDE 4, or to switch to another current environment, whether it be GNOME or another offering. To my surprise, I found that KDE 4 improved a lot over the first year-and-a-half of its life, and I was impressed.

As it stands today, I’ve been using KDE 4 full-time for about two-and-a-half months, and over that time, I’ve stumbled on a couple of neat “tricks” that makes computing either more interesting, or much more productive. This article will highlight the tricks that I use on a regular basis, and I should note that I’m sure there are equally amazing tricks that I’ve yet to discover. If you have any tricks of your own, please feel free to add them to the related article thread (linked at the end of the article). Also, please note that these are in no specific order.

This trick in particular is one I stumbled on purely by accident, but when I first saw it, all I could say was, “Whoa”, because I immediately had a surge of ideas go through my head as to why it’s so useful. If you’re anything like me, you spend a fair amount of time in a file manager, and as a result, you probably juggle files around often, moving them from one spot to another, copying them, removing them, et cetera.

If you’re also like me, you use the command-line just as often in order to take care of tasks quickly, (especially to delete a file, since KDE can make that a very slow process at times). In KDE 3.x, there was always an option to right-click inside of a folder and open up the Konsole which would set you in the respective folder, but in KDE 4, that functionality was removed. Instead, this inline CLI was introduced, and all you have to do is push F4 when in a folder (the reason I stumbled on it in the first place is because I accidentally didn’t hit the Alt for Alt+F4). 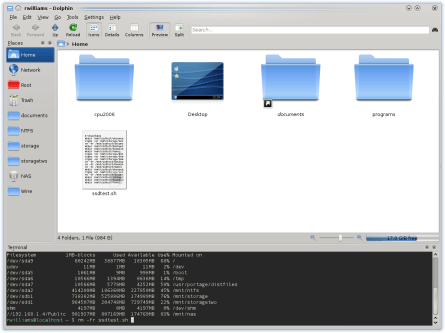 The use of this can vary, but it’s all handy. Want a seriously quick way to check up on your hard drive space? Load the CLI and use ‘df -BMB’. Want to delete a huge folder, reliably? Load the CLI and use ‘rm -fr /folder’. Because KDE, or any environment can be slow in copying huge folders from one place to another, another option is to load the CLI up and use rsync right there, without loading up a separate terminal.

This feature is ultra-useful, but it can also be a little finicky, so you need to be a little careful. Because it follows you around the file manager, it’s not wise to type in a command and then enter a folder, because then the terminal will usually try to process the command you’ve put in, even if it’s not finished, so definitely keep this in mind.

The previous trick is meant more for power-users, and so could this one be. Because I deal with the file manager so often, shuffling files all over the place, I tend to have more than one instance of Dolphin open, side-by-side. I do this so that I can monitor two folders at once during some copy or deletion process, or just because I need files from two different folders. But, the “Split” feature is one that rids the need for multiple folders. 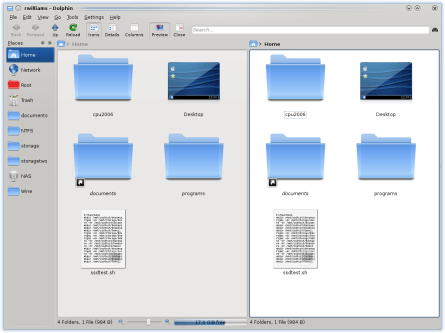 As you can see in the screenshot above, I am in my home folder, and after hitting F3, Dolphin splits the single window into two different views. Now, while I retain the view in my home folder, I’m able to use the second half to go elsewhere in the machine, and if I need to copy something from one place to the next, I can do it all within the same window. The inline CLI feature of the previous trick is still usable here, and its location will differ depending on which side of the split you are currently using. Overall, these two tricks together make for fantastic control, and all in one window.

One of the reasons I didn’t like KDE 4 at first was due to the fact that I couldn’t create hotkeys to my favorite applications. It turns out that I was wrong, and that it’s just not as easy to pull off as it was with KDE 3.5, which would allow you to right-click any item in the K Menu and go straight to editing its properties. In KDE 4, the only way you can change anything in the menu is to right-click on the KDE icon in the K Menu itself, and then go into Menu Editor.

If you’ve used the menu editor from previous versions of KDE, nothing at all is going to surprise you here, because it all looks identical. But why it’s a powerful tool is because it allows you to either add or remove applications or entries from the list, along with being able to alter a launcher so that it starts in root. But related to this trick, my favorite feature is being able to setting up shortcut keys. 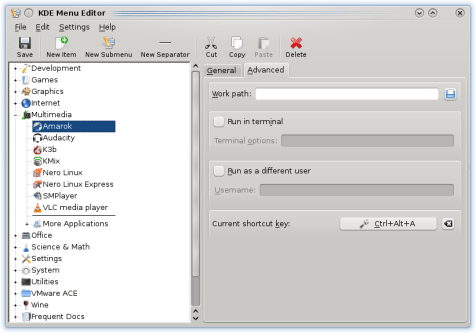 Want to load up Firefox or any other application in the menu with a few simple keystrokes? It’s simple. You just need to go into a menu, click on an application, and click the advanced tab. From there, you can click on the box for the shortcut key and change it to whatever you like, up to four keystrokes total. If you want, you could open Firefox with Ctrl + Alt + F, Ctrl + Shift + F, Ctrl + Alt + Shift + F, or whatever you want. I personally open my Amarok with Ctrl + Alt + A, for example.

For users of Linux, this kind of functionality may seem a little mundane, but believe it or not, no Windows OS offers ¹ the ability to launch applications this way, which to me is rather strange. If you set yourself up with a lot of these shortcut keys, you’ll appreciate it over time as you realize you save a lot more time (it’s quicker to launch an application like this than to use a shortcut on the desktop, I’m sure of it). Of course, if you open up the same applications on each boot, you could just add shortcuts to all of the applications in your KDE startup folder, but this to me is the better solution.

This is one of the more advanced tricks on my list, because it requires you have desktop effects built into your KDE installation (you probably do), and also proper 3D acceleration (if you can run 3D games or applications, you should be fine). Throughout various Linux-related articles on the site in the past, I’ve noted my personal lack of interest in all things Compiz, because I feel like I personally don’t need fancy desktop effects to enjoy using an OS, and past that, I found most of the eye candy to be more counter-productive than anything. 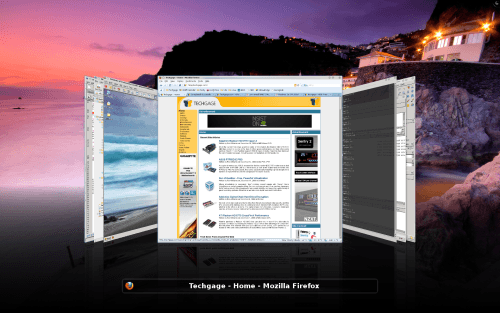 If there’s one exception I’ll make, though, it’s the Cover Switch feature, which replaces the boring old alt-tab switcher into a 3D Cover Flow knock-off. Instead of looking down at the taskbar, or a simple Alt-Tab pop-up, Cover Switch allows you to see real-time all of your open applications, in a 3D environment, and switching between them all is simple… just push Alt and keep pushing Tab to sort through. It may be 3D, but it’s simple, and fast.

Selecting multiple folders in any OS is a pain, unless you have to select all of them. In Windows OSes, I’ve learned to hate selecting folders one by one, because more often than not, I’d end up messing up and having duplicates of everything I selected up to that point. In KDE 4, that won’t happen, but the developers made selecting multiple files or folders even easier… no Ctrl needed. 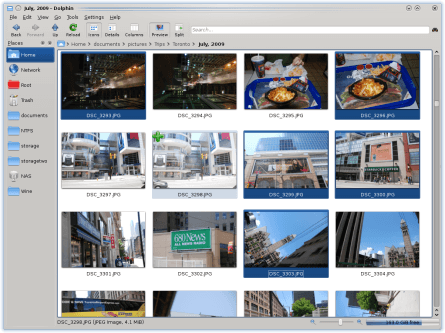 Instead of requiring the Ctrl key to be held down, you can hover over any file or folder in a given folder to reveal a + or – sign. All you have to do is click that in order to select the folder. Do that for each file or folder you need, and then do whatever you want with your selection. There is one slight downside to this method. If you happen to mis-click, you’ll still lose your selection up to that point. If you are using the Ctrl method, then clicking outside of a folder by accident won’t affect anything.

While I like this feature, I think an update could definitely be made. It would be awesome if when selecting files and folders this way, the selections are retained even after clicking outside of a folder by accident. Even better, the same selection could be retained even if you traverse into a different folder. To off-click, you could simply double-click outside a folder instead of a single click, and also introduce a new keyboard shortcut to release all of the selections.

¹ My facts were wrong here, as Windows does allow this. See thread.